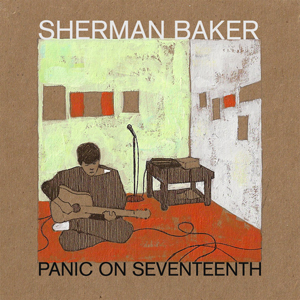 Local singer-songwriter Sherman Baker recently released his second EP, Panic on Seventeenth, and will celebrate with a show at Luigi’s Fungarden on Friday, Dec. 2, 2011. Fans of Wilco, Violent Femmes and The Pixies are sure to dig Baker’s nasal-y, folk-meets-punk-rock vibe. With your $5 admission to the show, which starts at 8:30 p.m., you’ll get a free download card for Panic on Seventeenth. Accompanying Baker that night will be Joseph Kojima Gray on bass and Brian Guido on drums. Both are also in the band 50-Watt Heavy. Opening the show will be Brolly the Well and Damon & Mason (of the band Forever Goldrush). Baker worked on his new four-song EP with Robert Cheek (producer, engineer) and Matt McCord (played percussion on the recordings); both are longtime staples in the Sacramento music scene. The four songs on Panic… will show up in some form or another on a full-length album Baker plans to record in February 2012 called Seventeenth Street, which will also feature eight brand new songs. Baker plans to spend two weeks at The Hangar, again with Robert Cheek manning the boards. For more information and to keep in the loop with all things Sherman Baker, visit Shermanbakermusic.com