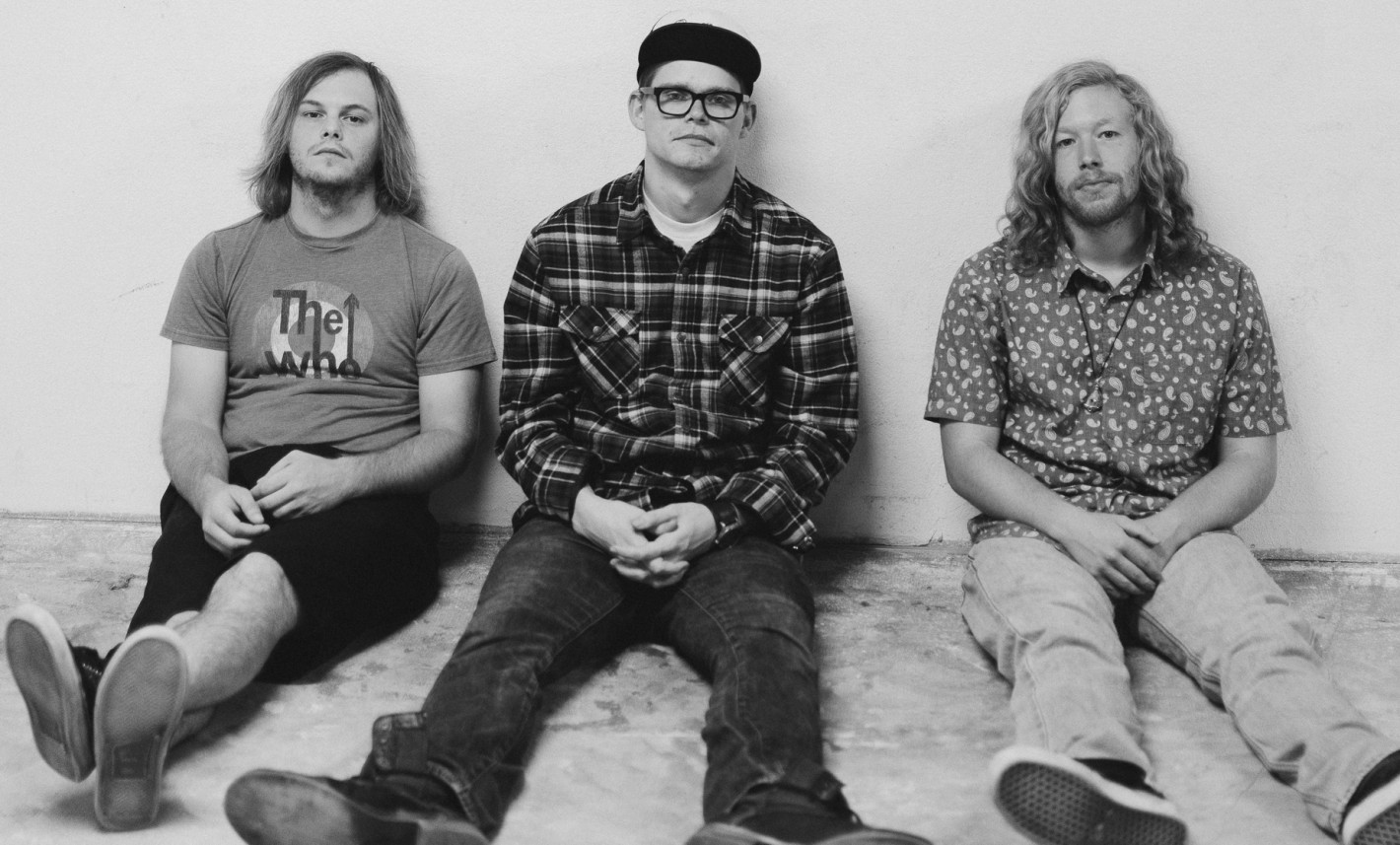 What’s in a name? The Bard was correct, names are meaningless. The truth lies in what the name represents. While the name Shotgun Sawyer may still be foreign to most, sometime in the near future it will very likely be commonplace.

However, the name Thunderchief might ring a bell. That is the moniker that the three-piece outfit now known as Shotgun Sawyer—including vocalist Dylan Jarman, guitarist Brett Sanders as well as David Lee on the drums—had played under for more than a year. Yet, when it came time to finally put out their first record, they found out they were not the only ones using the Thunderchief name. While they were quite fond of their title, they moved on.

“Shotgun Sawyer is the new name that we chose,” said Jarman in a phone interview with Submerge. “We had been playing for almost a year as Thunderchief, and we really liked that name, but when we went to release our album, we looked at iTunes and [other sites], these other bands had already posted things as Thunderchief. We didn’t want things to get confused, it’s not fair to them. We thought about it for a long time, and actually Brett’s brother suggested Shotgun Sawyer, so we just went with it.”

While this was not an easy transition, the band feels in the long run it has been worth it. In some respects, even rewarding.

“It’s been a really interesting opportunity,” said Jarman. “We are starting again, so a lot of the work we had done, our branding, has kind of gone down the drain. But, then again, we’re starting fresh, but in the same band but with music already, an album already, and with know-how already on how to make our brand stick. How to get our name out there. We’re hitting the ground running this time, but nothing has changed. It’s a really unique opportunity.”

Their music, however, will speak for itself. This is hard-punching, head-banging, toe-tapping, knee-slapping, hand-clapping nostalgic rock, and it’s goddamn irresistible. Their debut album, titled Thunderchief, is due out Aug. 13, 2016. This album, from the ultra-catchy sing-along first track “Skinwalker,” to the face-melting jam “Sudden Death in the Flesh,” to the slow rocker “Nothing Left to Lose,” doesn’t stumble for a second. Instead it consistently provides quality songs for rock purists, regardless of age.

Shotgun Sawyer will no doubt get comparisons to bands such as the White Stripes and The Black Keys for their obvious shared inspirations, but don’t expect that to limit their appeal. You really can’t have too much catchy, hook-filled rock ‘n’ roll.

“Dylan and I have played music for quite a while, fiddling with stuff, seeing what sort of styles we like, what styles we can mesh with,” said Sanders. “We started to want to actually start a band, because we wanted to get serious about it, so we needed a drummer. We tried out a couple of people, but I had played with David—our current drummer—I had played with him just in old jam sessions and stuff here and there for a while. So I suggested we bring in this drummer because I knew he was good and he would work well with our style, and we brought him in, it happened to work. We practiced a few times together, went to an open mic and played some music, and the energy was really contagious, and it was hard not to admit that this was the right setup for our band.” 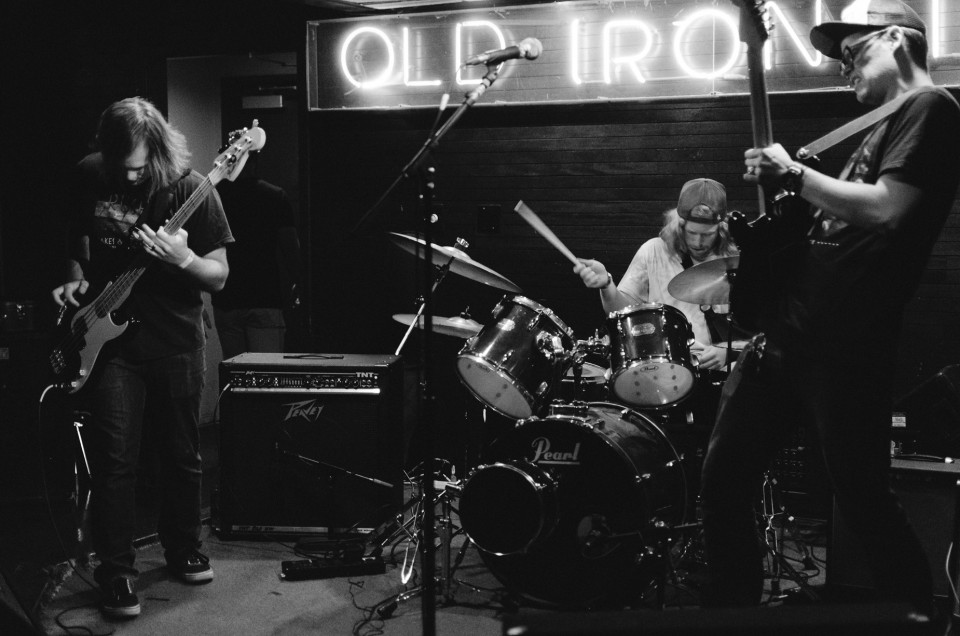 “One of the songs that’s on Thunderchief, ‘Lawman,’ the third track I think, that’s a song Brett and I wrote before David was ever in the mix,” Jarman added. “That was the first original song Brett and I sat down and wrote. The album, that’s definitely the music that’s been coming out of us this entire time. It definitely typifies the mission that we have. We all have our different influences—David loves jazzy stuff, Brett really loves Rush and I really love Zeppelin and the Rolling Stones, that middle ground is what all of those styles come together to fuse us together.”

In a post on the band’s Facebook page, the band shared a photograph with a collection of their favorite bands’ first albums, which they had been tirelessly obsessing over while putting the finishing touches on their impending debut.

“With that, we were mostly looking for what most of our [favorite bands] did for their first albums in terms of art,” said Jarman. “What sort of things in terms of pictures, pictures of the band, imagery because, I think, a lot of times the visual aspect of a band isn’t focused on as much … there’s an equal element, the visual element, the visual representation of the band. So we really wanted to focus on the albums that we love that were first albums, and see how we could apply those lessons into our album.”

The band recorded the album at Earthtone Studios in Sacramento, with Patrick Hills recording and producing. The band is very happy with the results of that session, in particular, the raw sound and honest qualities the final product offers to listeners.

“Frankly nothing bothers me more than when you get that robotic, perfect, every single drumbeat, every single bass note, every single guitar solo sound exactly perfect,” Jarman said. “There’s no humanity in that. For me, what I listen to in music is the humanity … something I can connect to. I can’t connect to perfect drumbeats. I can’t connect to perfect guitar solos. I can connect with imperfections because I am imperfect. So what I really wanted in the record, and what Patrick was totally willing to work with us on, is making it sound [real], even if it is imperfect, even if there are little quirks and imperfections, that’s us coming through the music. I really wanted that.

“If you listed to old Led Zeppelin or you listen to old Rolling Stones, you’ve got people hootin’ and hollerin’ in the background, or you get Keith Richards messing up on a solo, but they kept recording,” Jarman continued. “Who cares? That’s an honest representation, it’s an authentic representation of what they play like. I don’t want someone to listen to our record and have them feel like, ‘They were way better on the record.’ That would be a nightmare. I want people coming to a show and thinking, ‘oh, damn … these guys can play!’”

Yet for all of their musical influences—be that band or genre—when pressed on what truly influenced their sound, the group cites growing up in Auburn as their main source of material.

“I’d say just the fact that we are from Auburn is a pretty big part of who we are,” said Jarman. “We grew up toward Grass Valley, up in the hills, and the kind of music we always listened to was whatever they were playing on the classic rock stations … there’s four or five of them up here. We don’t get a lot of the popular music radio stations. So we all grew up listening to CCR and the Eagles, and that’s the kind of music that we love. We’re just some guys from the backwoods, and we like to play old school rock ‘n’ roll, but we’re also young and we play it our way.”

Shotgun Sawyer’s album release show is Saturday, Aug. 13, 2016 at Old Ironsides, located at 1901 10th street in downtown Sacramento. The cover is just $7, 21-plus, 9 p.m. Also performing will be locals The Pressure Lounge and Michael Ray. For more on Shotgun Sawyer, visit Shotgunsawyer.com or Facebook.com/shotgunsawyer.