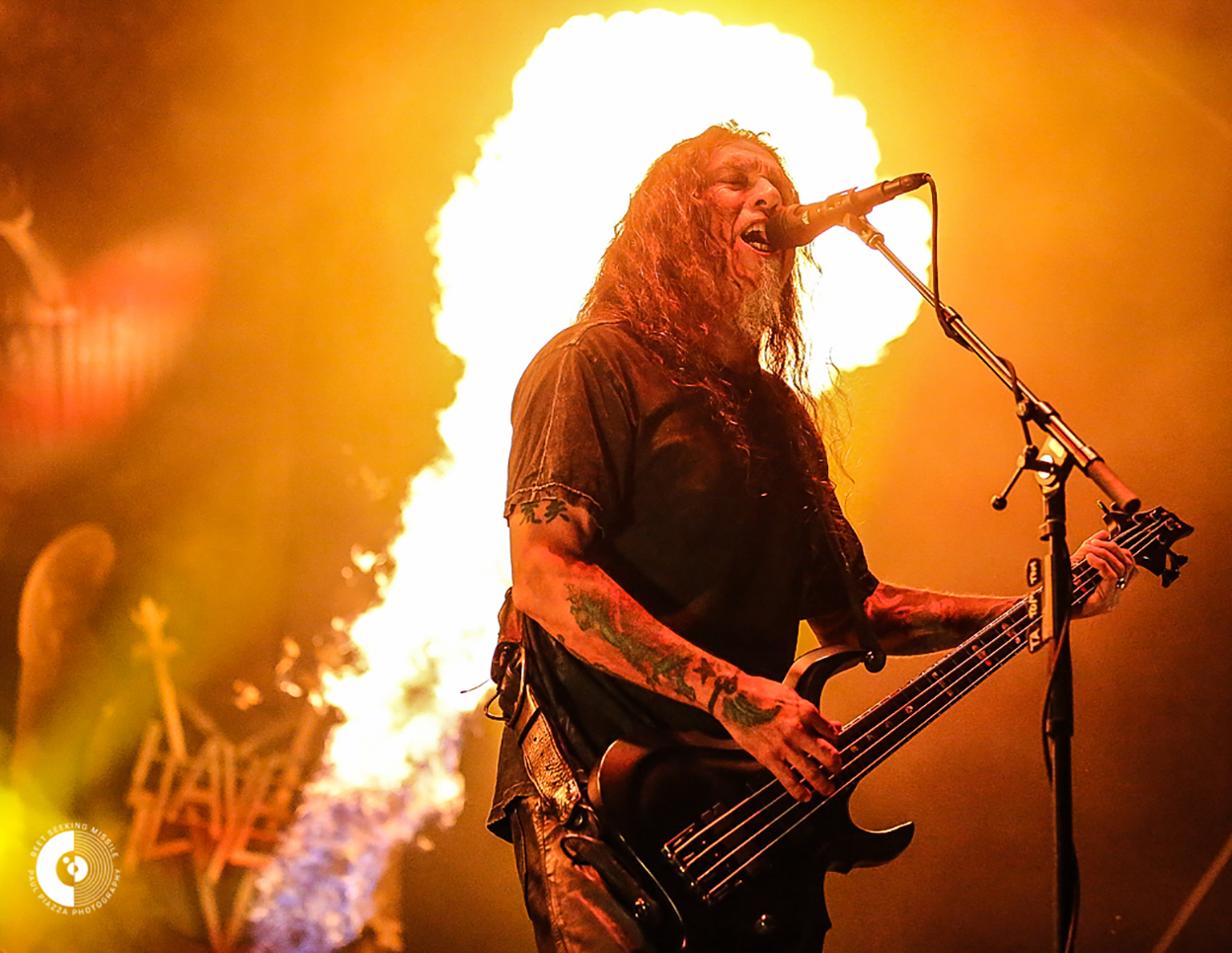 Words and Photos by Paul Piazza

To understand the impact of Slayer’s music and fully comprehend the dedication of their fans, one merely needs to listen to how these enthusiasts of the band greet one another. “SLA-YER!!!” is never merely stated in lower case. It’s usually shouted, screamed or texted in all caps with exultant exclamation.

Sometimes it’s done a little more quietly or unexpectedly, but always with strong emphasis. I found this out when I recently wore a Slayer T-shirt to a Midtown gym for a workout. A mild-mannered looking gentleman of about 60 who was passing me in the hall noticed the shirt and quietly but emphatically turned and yelped a quick “SLAYER” while flashing the devil horns hand sign at me. I nodded affirmatively.

Over the years, Slayer has played many memorable shows in the Sacramento area. They first played at the Crest on the middle of a bill featuring Venom and Exodus in April of 1985. Later that summer, they had their first headlining show at the former Club Can’t Tell and since then have played many local shows at a variety of places. Over the years, they’ve played at a variety of different sized-rooms including the former El Dorado Saloon in Carmichael, the Memorial Auditorium, the Convention Center and Arco Arena. They have been on the road for over 35 years and have outlived more than a few venues and countless bands. Quite a ride for a band that used to tour in singer/bassist Tom Araya’s Camaro while towing a U-Haul. 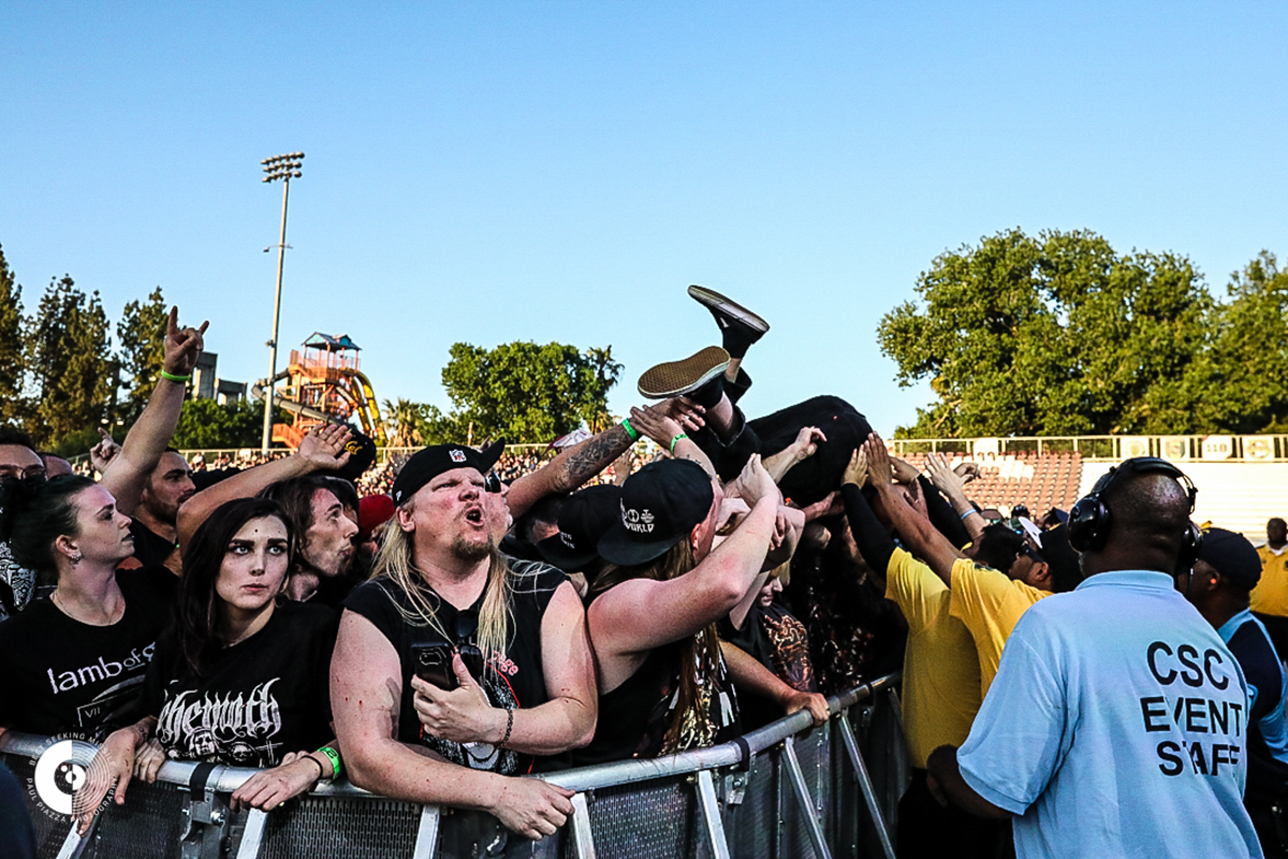 This year they decided to take one more lap before calling it quits. So it was fitting that Sacramento was on the list of farewell cities. On Mother’s Day, they played an outdoor show at Papa Murphy’s Park, on what is being billed as their Final World Tour. Many of the band’s longtime fans came from near and far to witness this event, as did a newer generation of eager thrash fans.

To make the day more memorable, the band brought along heavy luminaries Lamb of God, Anthrax, Behemoth and Testament.
Slayer began in 1981 when guitarist Kerry King started jamming with drummer Dave Lombardo in the drummer’s Los Angeles-area garage. King then met Jeff Hanneman in a parking lot after they both auditioned for a southern rock band. Later, they recruited Araya, who at the time was training to be a respiratory therapist. The rest, as they say, is history.

The band developed their menacing early thrash-metal style on their first two albums Show No Mercy and Hell Awaits while also experimenting with different looks that included makeup, upside down crosses and big spiked wristbands. By their third try, they had ditched the looks and unleashed an album called Reign in Blood on the world.

The scathing 28 minutes and 58 seconds of music on this record altered the landscape of metal permanently. It blurred the line between metal and hardcore punk and was played at breakneck speed. A young Rick Rubin produced the record and he suggested the band ditch the reverb on the guitars and vocals. The resulting sound was dry as a bone and as heavy as granite. Incredible guitar riffs and mind-blowing drumming wrapped around Araya’s brisk vocals that he would punctuate with occasional blood-curdling screams. It became the inspiration for countless bands and is considered one of the great metal albums of all time.

Twelve albums and one anthology entitled Soundtrack to the Apocalypse later, Slayer are considered by many to be one of the greatest metal acts ever. They are one of the legendary Big Four of thrash metal, which also includes Metallica, Megadeth and Anthrax. However, to most fans it really comes down to Slayer or Metallica. 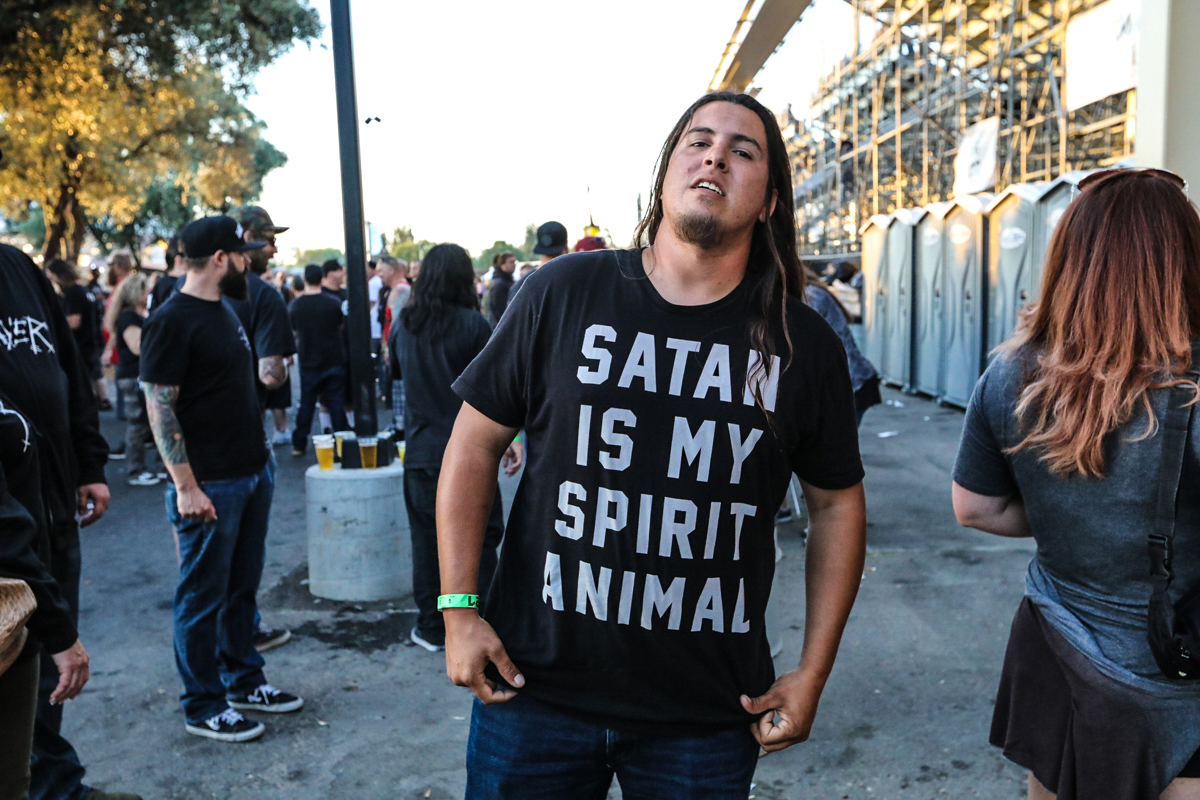 However, none of the openers were slouches at Papa Murphy’s Park. After an unexplained one-hour delay, things kicked off with the East Bay’s fantastic Testament, who gleefully shredded during their brief set. Next up was Behemoth from Poland, whose blackened death metal and makeup were a little ironic in the bright afternoon sun of this nearly perfect day. But they ignored that and drilled fans with songs from their popular album The Satanist. Naturally, everyone, including some fans who were painted up like them, ate it up. 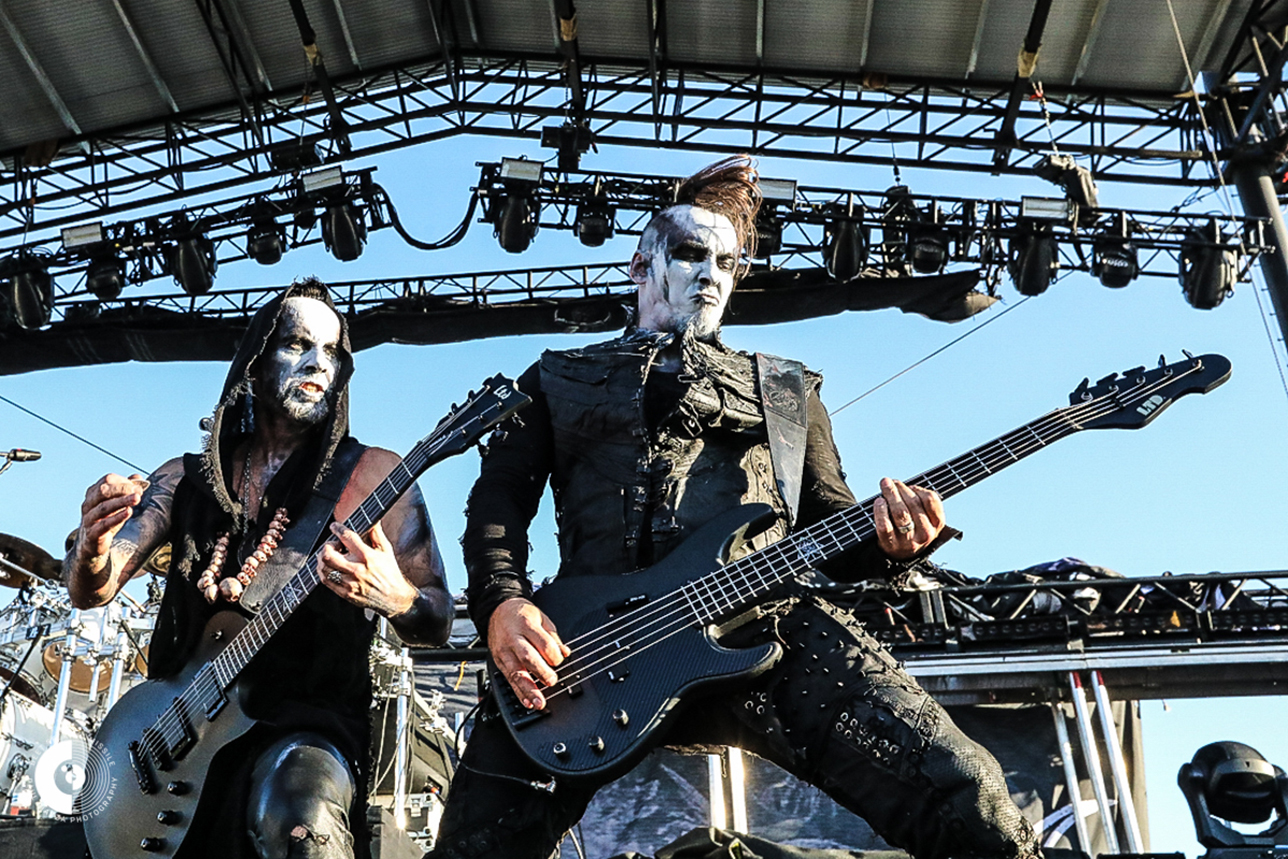 Next up was Anthrax, the East Coast legends who incited an early mosh with cuts from their best album Among the Living. After them were Lamb of God who hail from Virginia. Their drummer Chris Adler is considered one of the greats, and in recent years he has split time handling the same duties for Megadeth. 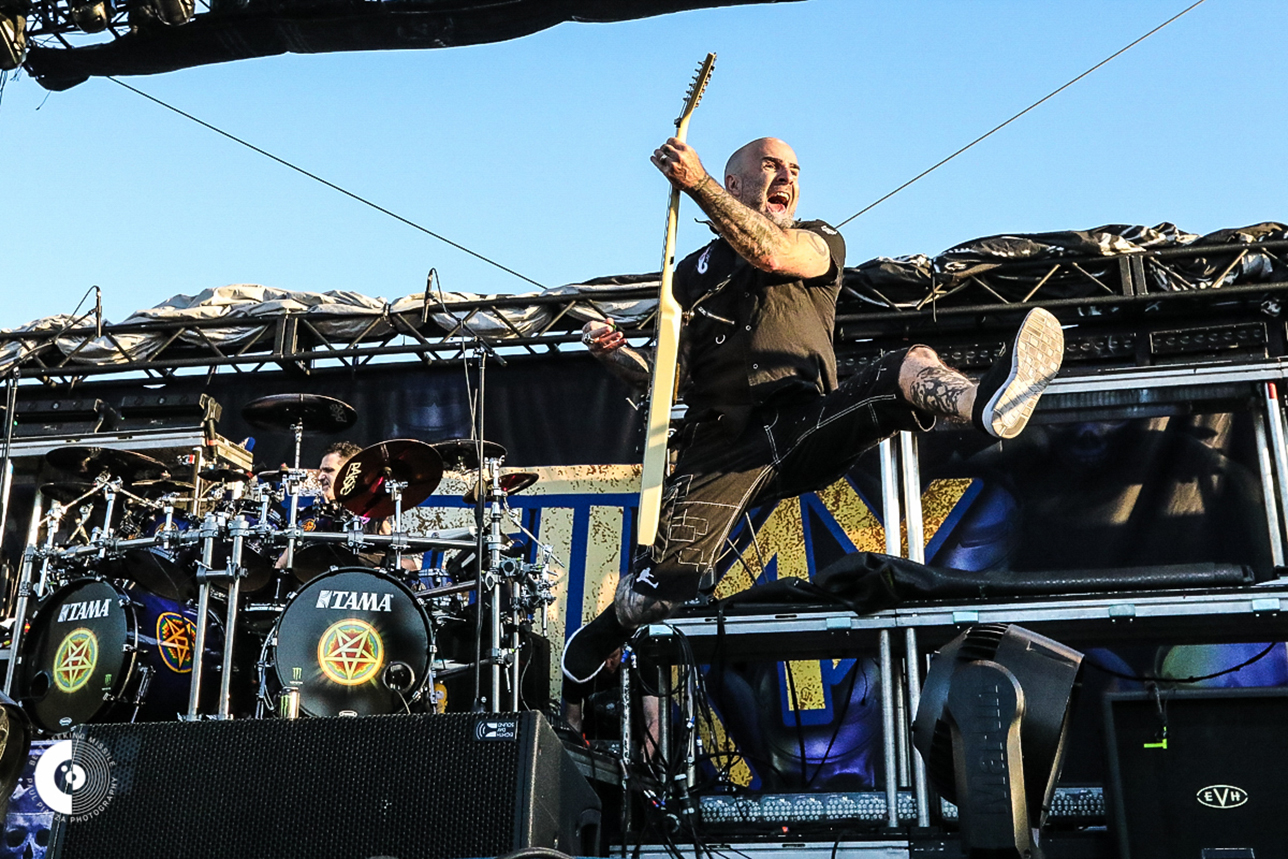 When darkness came, it was finally time for Slayer. Araya and King are the only two remaining members from the original four. Sadly, Hanneman passed away from liver failure in 2013. As the the one who brought the punk influences to the band and the songwriter of most of the band’s memorable material, he is sorely missed for both his talents and personality. The band wisely chose Gary Holt of Exodus to replace Hanneman. He is an extraordinary lead player and perhaps one of the most exuberant ambassadors in all of metal. He recently popped into Harlow’s to jam with John 5 of Rob Zombie’s band.

Lombardo has long been the threshold for all thrash metal drummers. He is considered the godfather of the double-bass. He and the band parted ways over personal differences in the early ’90s. Hanneman talked him into re-joining a decade later and after a couple of albums and quite a bit more touring, he finally left for good over a pay dispute in 2013. His replacement, Paul Bostaph, has done a solid job of filling his role and continues to do so. Lombardo recently played Ace of Spades with Dead Cross.

Together, the final version of Slayer are still a formidable bunch. King played the entire set at 1,000 miles per hour and looked fit and unstoppable at 53. Araya, the band’s eldest member at 56, has suffered a variety of health ailments, including a major back surgery that ended his days of head-banging while playing. He looked fit as well and possibly the happiest he’s been onstage since the band’s gleefully wicked early days. 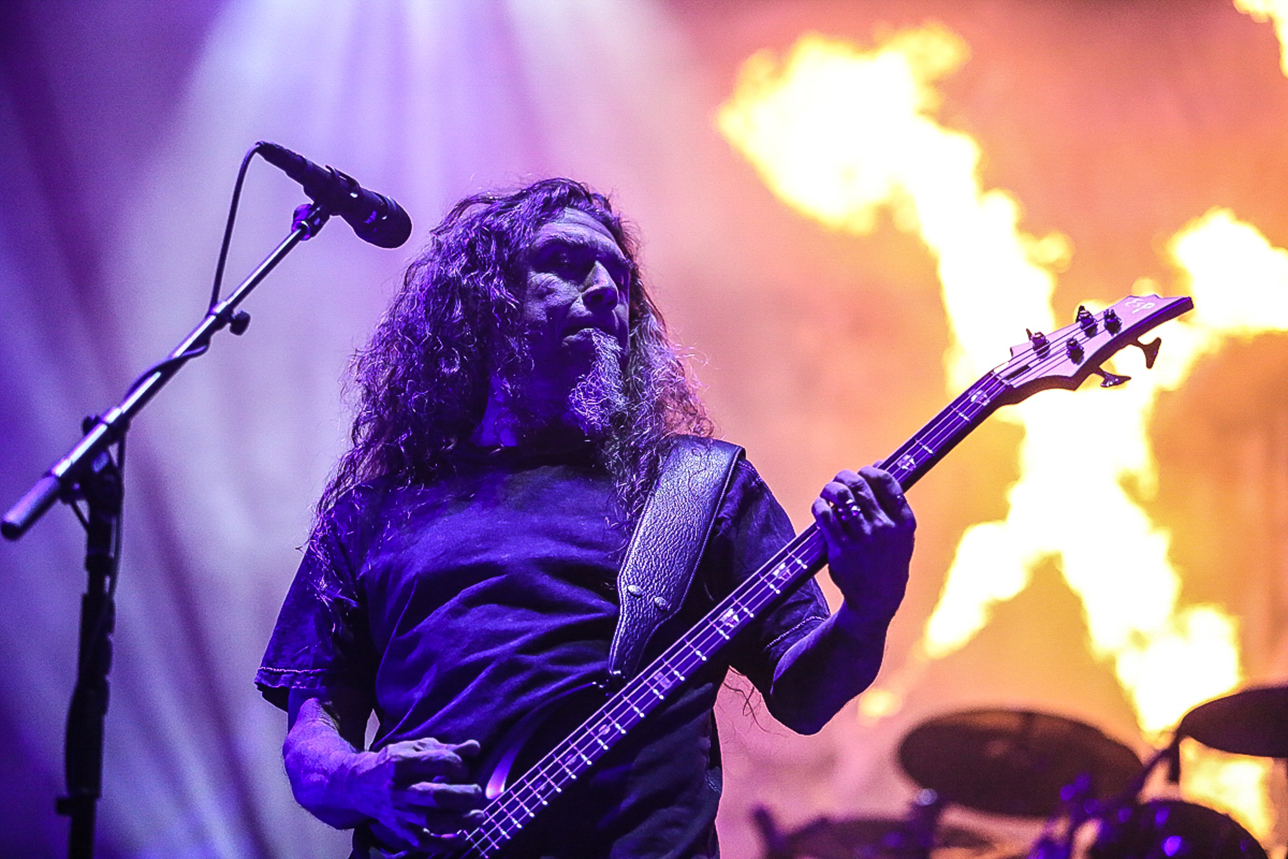 Slayer brought lots of fire … literally. There was a constant barrage of flames from the rear of the stage as the band raged at the front. They also blazed through a rapid-fire 19-song set that included songs spanning most of their career. The sound was crisp and the night was cool and during it all, one could only wonder how this all went over in River Park, the neighborhood across the river, whose noise complaints led to the shut down of the Cal Expo Amphitheater at the same location many years ago.

Naturally, everyone in the soccer stadium couldn’t have cared less about any of this while raging along loudly to the lyrics of “Angel of Death,” as the band slammed it home during the finale: “Rancid Angel of Death…FLYING FREE!!”

Papa Murphy’s Park seemed to be a fine fit for Slayer’s finale. The bands, their fans and the thrash metal gods seemed to smile upon Sacramento on this glorious Mother’s Day afternoon and evening. And if you listened closely, over the breeze and the river, you’d probably have heard … ”SLA-YER!!!” 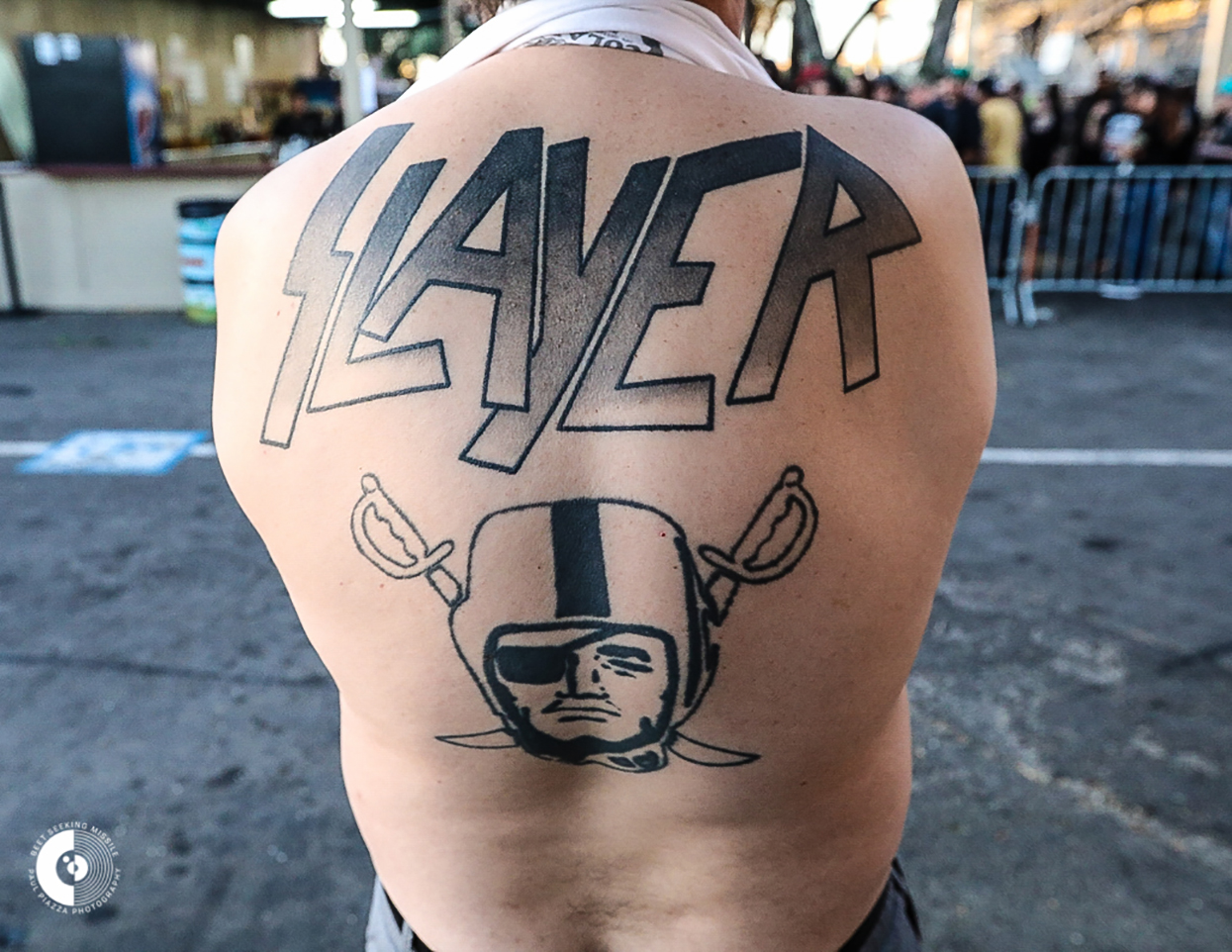 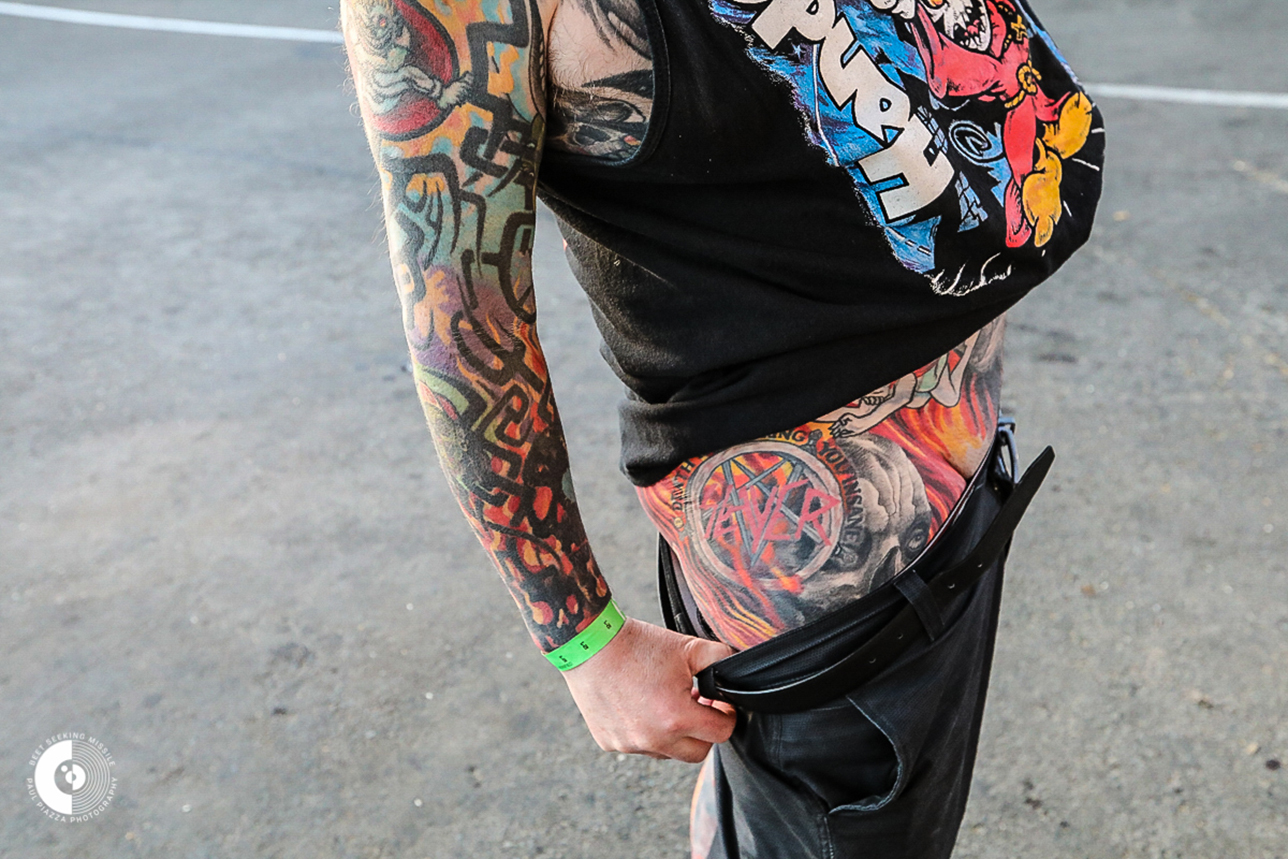