So Hard to Define 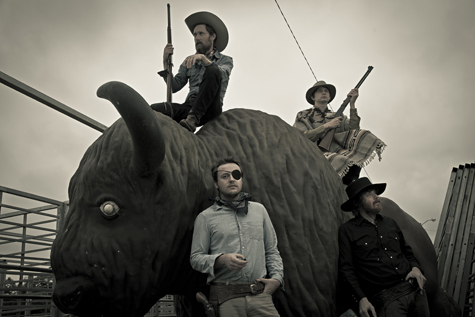 The Features tap into the sounds they grew up on

Bands that have released albums dating back to 1997 are not expected to catch the eye when scanning The Twilight Saga: Breaking Dawn soundtrack artist listing–you know, because your friend or teenage sister or jejune girlfriend owns it.

The Features’ timeline is weird in that regard. The band formed in Sparta and Murfreesboro, Tenn.–a couple small/college towns southeast of Nashville–in 1994, which is only a few years before most of the purchasers of The Twilight Saga soundtrack were born. But the compilers of the soundtrack were taking open submissions. Singer/guitarist Matt Pelham described the submission as whimsical and with little expectation. “We had a couple of extra songs from the record and they were taking submissions,” he said. “It’s been pretty crazy. It’s now our most popular song and it’s not a song we wanted to put on a record.”

The Features won’t find out whether “From Now On” will alter the attendance of their shows until the band embarks upon its winter tour through the Southwest and up the coast toward Sacramento. As it stands, the band is pleased with its fan base. Last July, The Features released The Wilderness on the Kings of Leon-run label Serpents and Snakes. Pelham discussed the record’s conceptualization and reception, while driving around Murfreesboro, the band’s current home base.

The Wilderness is described as an amalgamation of genres such as krautrock, indie and classic rock, but I feel as though classic rock and blues are the dominant influences at work. These are also the genres you grew up on. Was there an intention to revisit the music that you first learned to play?
I guess it’s always sort of stuck with us. We all grew up with different influences, which I feel helps us out as a band with everyone writing their own parts. Roger [Dabbs] and I grew up listening to a lot of classic rock, and when I went to college and from that point for another eight to 10 years I got away from it. Only just recently I’ve been going back to it in the past three or four years.

I don’t know if I’m just getting more nostalgic toward it or what it is. It is hard for me to get away from. It’s such a strong influence. On a subconscious level it winds up being what I lean toward when I write.

Were there any records in specific that crept back in to your rotation that played a role in The Wilderness?
No. It’s just one of those things like back in high school I wore out those Led Zeppelin cassettes and then just got so sick of them by college. I started college in 1993, so it was prime time when it came to the music scene changing dramatically. From my junior year of high school to my first year of college it was pretty nuts, the amount of music and variety of music that was out there.

I went from listening to Led Zeppelin, Pink Floyd and Lynyrd Skynyrd all the time, to hearing stuff like Pavement. It was refreshing. I imagine I’ll end up going back to Pavement someday too. But now I’m just revisiting Creedence and stuff I grew up with, which is nice.

Being you grew up in a time of dramatic shift, how do you feel about the current climate of music? You’ve expressed that your band walks the line between mainstream and hipster.
I’ve always had a hard time knowing where we fall in conversation. It’s one of those things I’d love to know. It’s always been this way: you either like punk rock and that’s it. You can’t like punk rock and R&B. But none of us have ever been like that.

It seems like most of the people we end up talking to at our shows, getting to know and who’ve listened to us for a while, seemed to be similar to us in the sense that they just like music. It’s not so much about what kind of music it is or what style. I like that about the people at our shows. They just love music and it’s not so much about a trend.

I really don’t know where we fall in the context or big picture as a band.

You worked with producer Brian Carter and engineer Craig Alvin on The Wilderness. I was curious about their involvement in the recording process. You manage to pack a very big sound into a live tracked record. Where are their fingerprints on this record?
We’ve recorded with Brian in the past. He’s a good friend of ours. We’d always record at his house, which was very comfortable. It was one of the reasons we wanted to work with him again. 1) He’s good. 2) It’s an extremely comfortable environment.

We brought Craig in, who’s originally from Portland [Ore.] and living in Nashville now. We heard he was really good and he really is. He brought a lot to it. We wanted everything to sound big, but almost as if we were playing a house party in a living room. Craig and Brian both, I feel like, they executed it nicely.

Did you record everything live as a full band and jam through or was it tracking and overdubbing the pieces?
It was all done live. There were some overdubs, just added bells and whistles and the vocals were overdubbed, but the basic track is united. It seems to be the only way we can record really. We’ve tried track by track and we sound awful. I like records that are done track by track. They have a nice homemade quality to them. Like [Paul] McCartney’s first record or [David] Bowie records to me sound really neat. They’re stiff, but it just has a… I don’t know… ‘70s sound I like. But we just can’t do that. We sound awful.

With the presence of “Big Mama Gonna Whip Us Good” and “GMF” on the previous record, how important to you is it to slip in a political or environmentally conscious song into your records?
I never intend to put a message out. I’ll start writing a song and nine times out of 10 the lyrics will mumble themselves into place. If I end up getting a line like, “Big mama gonna whip us good,” I’ll think about where I’m going to go with that for months before I actually come up with something. That’s just where that song ended up going. I do feel strongly about it, but the songs write themselves in a sense. I don’t have a lot of control over it and those are my favorite ones because they come out easy.

Maybe it sounds like that? Maybe it kind of sucks because the lyrics are too easy? To me, those are my favorite lyrics, the ones that sort of just happen. I do pay attention to those issues, so it just ends up coming out in a ridiculous way. It’s hard for me to write about stuff like that unless it has a humor to it, otherwise I feel like I’m being someone I’m not.

The Wilderness is about six months old. Will you be working new songs into your set, since you’ve said you’re a band that typically spends its rehearsal time writing new music?
Just before The Wilderness was released we recorded another record. So in the last four or five months of touring we’ve been trying to put some of that into the set to keep ourselves from being bored. We’re trying not to play it too much, since we know eventually we’ll have to play it a lot and we’ll get bored too quickly.

Have you begun talking about the release of that next record?
No. I have no idea what’s going to happen with that. We’re going to continue to tour behind Wilderness and see where we stand in the next three or four months.

I imagine being on a label, they’ve got expectations on releasing singles and stretching out the promotion of a record that’s not reached a year in age.
They’re pretty hands off. There’s not really expectation at all. A lot of it is left up to us, which is really nice. Most of the decisions have been our call as far as how we want to release stuff and when.

The Features timeline has met obstacles like unreleased albums, lineup changes and other setbacks bands experience. Where does your resilience come from to carry on as a band?
I don’t know if any of us would have any good ideas on what we’d want to do or what else we’d be able to do for that matter. We’ve done this for so long it just feels like what we should be doing. It keeps us happy and comfortable. When we’re writing and actually able to practice or be on tour, I feel like it’s when everyone is at their happiest. It keeps us going to have that outlet.