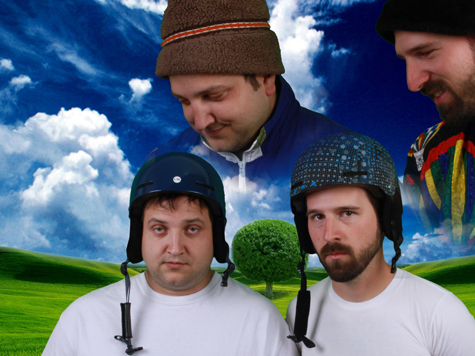 The seeds of SOLOS were sewn around 2007. That was the year Nevada City freak-folk troubadour Aaron Ross rounded out an unlikely five-man partnership for Hella’s fourth full-length, There’s No 666 in Outer Space, providing vocals to a band internationally known for its aversion to much beyond breakneck time-signature gymnastics, sizzlingly technical guitar-and-drum patterns and explosive live shows. And while Hella’s been on a hiatus of sorts after its last LP, Tripper, was released in 2011–much of that having to do with drummer Zach Hill’s quiver of spectrum-spanning projects, such as the hugely popular Death Grips–guitarist Spencer Seim sought a crisp creative direction to aspire toward. There was only one person he considered to fill the half of that whole he was looking for.

“There’s just something about what Aaron does that I’m really into,” says Seim. “I’ve seen him play around town for years and there’s never been a single time I’ve seen him where he’s up there playing at a coffee shop or a local venue that I haven’t gotten goose bumps many times. I don’t know many other musicians that I get that with that consistently.”

So began the process of sussing out SOLOS, a new collaboration between Ross and Seim that’s already yielded probably the best, most imaginative and most sonically ballsy album of 2012 in their debut, Beast of Both Worlds (set to be released Sept. 11, 2012 via Joyful Noise Recordings). As hyperbolic as it felt to type that, it’s a rare occasion to verbalize a reaction to an album with repeated, “Holy fucking shit”s while kneeling in front of a Netbook for the entirety of the record. But Beast… is really that good. It’s brimming with enormous power-psych hooks, thick drums and the kind of sonic alchemy that seems totally unfair to other bands trying to make noise with instruments. Albums that sound this great, of course, take a lot of time to put together.

“It’s the way things work in the music world unless you fully plan everything and know exactly when things are happening,” says Seim of the year-and-a-half-long process to release the record. “But this was by the seat of our pants–kind of a more punk way of doing it. We just did everything on a budget and had a lot of people helping us and loaning us gear.”

Seim and Ross began writing together about two years ago, hoping to forge a unique hybrid wherein Seim’s progressive drumming would complement Ross’ seismic melodies, powerful guitar and witty, weird lyricisms. They performed around Nevada City and Sacramento under the working title Amaranth to demo songs in a live setting and dial them in a bit.

“The songs just needed a little boost I guess,” explains Seim. “Sometimes you write stuff and it comes out kicking ass in exactly the way you want it, but sometimes all the ideas are there and it needs some more working through. Playing it live in front of an audience, in my experience, changes songs quite a bit. Usually for the better.”

As Amaranth, Ross and Seim composed the songs that would reside on Beast… in about a month-and-a-half, and after playing out for a few months, they began the arduous task of talking with labels. But the duo didn’t get many responses to their work. Frustrated, Seim showed local producer Josh Henry their demos, who then passed them on to sought-after Abbey Road Studios engineer Guy Massey (Radiohead, Spiritualized, Depeche Mode) in England. Massey was immediately impressed by the group, who were now going by SOLOS, and invited them to travel overseas to make the record.

Seim was initially hesitant to work with a big-time engineer or producer, especially since without label support the duo were financing the record entirely themselves. On the strength of the demos, though, SOLOS seemed to already have their first number-one fan in Massey.

“Josh and Guy weren’t just hired to do this and try to make it sound as good as possible; they both did it for no money, just for the fun of the project,” says Seim. “They both had amazing ideas that we both really respected and enjoyed. There was no ego or anything involved, it was just all of us trying to make the best record we could in 21 days. It was different than I had expected, but way better because it wasn’t this big time producer telling us what to do. [Guy] was this super level-headed dude with rad ideas, sitting Indian style on the floor surrounded by guitar effects dialing stuff while [Aaron] played, blasting stuff through amps and basically trying to get weird sounds that none of us had ever heard before.”

Considering Seim’s instrumental pedigree with Hella–as well as with Nintendo-core crew The Advantage–getting weird sounds he hadn’t heard before would seem a pretty daunting task. But after hearing Ross’ mystical guitar progressions, and the overall haunted funhouse vibe of opener “Jung at Heart,” the Zeppelin-ish follow-up “All My Tribulations” and the excellent closing cover of Michael Jackson’s “They Don’t Care About Us,” you begin to understand just how far down the rabbit hole SOLOS was willing to travel.

For Seim, it was about channeling his musical sensibilities outside of the chaotic math-noise of his other projects, and allowing room for Ross’ songwriting talents to hold equal footing on Beast… After all, for Seim, two heads have always been better than one. Or three, or four or five for the most part.

“I’ve really enjoyed working on projects with just one other person in the past,” says Seim, “just because it’s two minds, and the way they fit together can make something really cool, especially if they’re very different. Even though Zach and I were making a very specific type of music in Hella, we’re both very different and have very different ideas about music. It was much more of a rhythmic connection we had there. With Aaron, we have more of a melodic connection.”

Seim and Ross were also careful to strike a true balance between their seemingly disparate styles for SOLOS.

“We had both just come from a band [Hella] that was very technical and was really trying to innovate in time signature and the way songs are arranged,” explains Seim. “With this project, we’re really just trying to do something new, something we haven’t heard before. But obviously, we don’t want to overplay in areas that aren’t necessary. We just want the beats or guitar parts to be interesting on their own and not have to be interesting because they’re fast or they’re in a strange time signature.

“We want it to be one entity and want you to be able to hear both of us in it, but not sound like us playing separately together, if that makes any sense.”

SOLOS began work on an even newer album six months ago, adding fellow Nevada City denizen Jeff Schmidt into the fold, officially making the band a trio. The timing of this addition is fortunate for the band, considering the instrumentation they included on Beast of Both Worlds and its impossibility to transfer live with just two people. Schmidt is taking on a kind of bass/keys hybrid with baritone guitar in helping compose the band’s new tracks, as well as during live performances.

SOLOS is only just now dusting off the soot of all that recording. They’re booking local shows in and around Sacramento, San Francisco and Nevada City for now, and are mulling over fall and spring touring options, though nothing has still been announced. But with another record 90 percent finished, perhaps the best is still to come.

“We’re just starting to get back into live band mode,” says Seim. “We’ve been in record mode for basically a year now. This is our first album, and we really plan to get out there and make a lot more.”

Beast of Both Worlds will was released Sept. 11, 2012. For more information and for touring and live performance updates about SOLOS, visit http://www.facebook.com/solosband, or http://www.joyfulnoiserecordings.com/artists/solos.