Earlier this year, Gene Simmons of KISS proclaimed, “Rock is dead,” and a massive backlash ensued. Because of the headlines that failed to address the context of his quote, Simmons was consequently vilified by the media.

On many levels, however, he was completely correct. Bands growing up during these times are getting virtually killed by file sharing and the like, and the model for new acts to grow has been eroded.
Sacramento’s Some Fear None, however, have led the charge locally and in neighboring cities to prove Simmons and the many naysayers here dead wrong. Through hard work, perseverance and a lot of sweat and tears, they have shown other striving local acts that a great band can come together and rise above. Furthermore, they are proof positive that people will pay to hear and see quality music when it’s done with heart and gusto.

For the uninitiated, Some Fear None is a hard rock band featuring Nathan Giguiere (vocals/guitar), Charles Carrasco (guitar), Jason Weisker (drums), and Gina Salatino (bass/guitar). And while the current lineup took several years to find its stride, the band is now firing on all cylinders and making one of the most ambitious moves a local band can take: headlining the 900-capacity Ace of Spades.

While the band’s influences are far reaching—they love everything from Deftones to Foo Fighters, Far to Alice in Chains, Tool to Soundgarden, Tremonti to Helmet—their sound is definitely radio-friendly, harmony-driven hard rock fare that would work well in rotation on 98 Rock or any like-minded station across the United States.

Unlike the thousands of Sacramento bands who play far too often, Some Fear None practice the “less is more” mentality and know how to properly set up a local show for maximum effect. As evidenced at their selection of support slots for national acts and, of course, their own headlining shows, their live shows are major events.

Frontman Nathan Giguiere took some time out of his busy schedule to shed some light on the band’s new release To Live and to Die and their pending CD release show on Aug. 1, 2015. 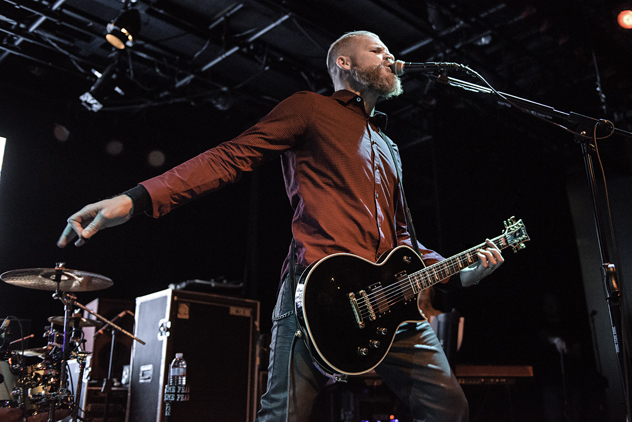 How did you come to join the band? I had never heard your name previous to joining Some Fear None.
What’s interesting about me is that I really had no part of the music scene or industry before joining the band. I didn’t even have any music to send them for the audition. I simply said, “Look, I want to do this and, at the very least, trying out for the band is something that is very important to me.” The band advertised on Craigslist for a singer, and I went there to see what was going on in the scene and to be basically be a fly on the wall so I could learn the ins and outs of being with other guys in a band setting. I replied to their return message letting them know that writing was my strong suit and to send me three songs, and I will provide the vocals and lyrics. I guess it worked because here I am. I had no training formally but I sang in my church choir my entire life beforehand.

So when did the band Some Fear None come to fruition?
Some Fear None was originally formed in 2010 and played five or six shows. I auditioned in the summer of 2011 after the band had broken up since the bassist and second guitarist had just left. They called me back for what I thought was my second audition and then told me they were breaking up. “We want to be straight with you, we have no band and would love to play with you. If you’re in, all we need to do is find a space, find a bassist and guitarist.” I told them I could play guitar and we immediately started auditioning bassists and eventually found Sean Navine; who played around four shows but soon left due to personal issues. After we parted ways, we decided to let Gina, my sister-in-law and guitar tech, get a shot. She was friends with me for years and was actually a guitarist that knew how to play bass and became even better over time. She’s a monster player and ended up joining the band after filling in for a couple of shows. After she bought her own bass rig, it was obvious she was serious. She joined in November 2011 and has been here since. 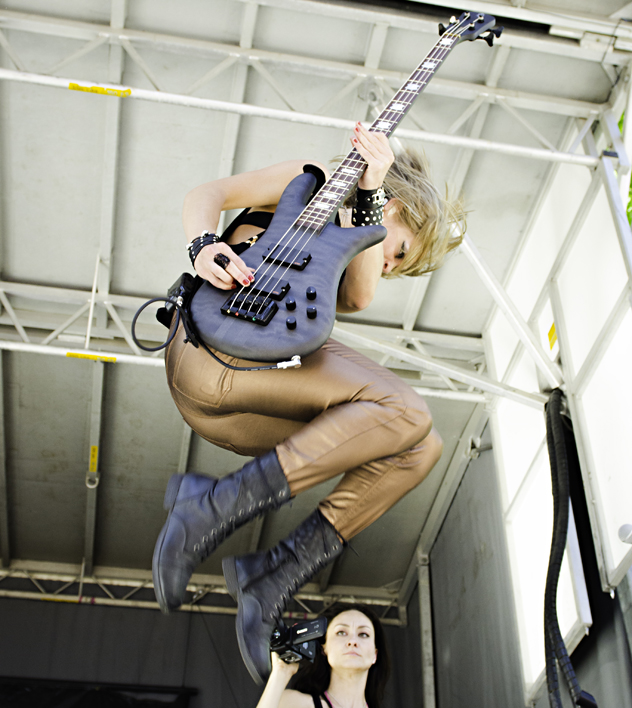 What was the band called before that?
Snapdraggin. It had two of the members, Chuck and Jason, from Some Fear None. They previously had a singer that didn’t work out for whatever reason. I simply said I didn’t want to hear what he’s done before since I had my own ideas and needed to prove myself. Snapdraggin, believe it or not, was close to being signed but they had a massive falling out which I would rather not go into.

Exactly how long did To Live and to Die take to write and record?
It basically took two years. We released Break Fold and Elevate, our first CD in May [2013] and did a CD release show. 98 Rock put us on Local Licks and that eventually helped us land a slot on the Sac Town Rocks show in June 2014 at the Capitol Mall with Tesla and Oleander. We played third of five on the local band stage and had a great response. The new single is called “Wave,” and we’re pushing that right now.

So you’ve been basically living and dying promoting the shit out of this show at Ace of Spades. Why such a big room and why not The Boardwalk or another smaller venue?
First off, I need to mention that Eric Rushing [Ace of Spades talent buyer] gave us our big break. What I most respect about him is that he has trusted me ever since we started working together. A couple of years ago Eric said, “You put a good lineup together, and we’ll do it” without really thinking twice. On May 4, 2013, we headlined Ace of Spades and drew over 700 people and definitely proved ourselves worthy of the room. Of course, now we have a new album and the pressure is even greater. However, we’ve been pushing this show for a bit. I work well on deadline and so does my band. Once you have a CD release show on the books, it makes everyone work to get the artwork done, the music produced, and have the show properly promoted. 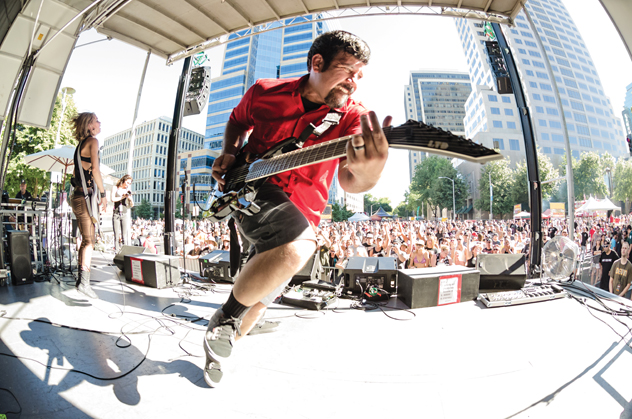 Is everybody involved in the songwriting process these days or have you taken over?
Yeah, everybody contributes, and it’s definitely a group effort. Of course, I write all my own lyrics and tell the stories but the initial songwriting comes from who brings the riffs or songs in. I’ve made a point to remove myself and write lyrics alone after the music is pretty much done. Every lyric I write is the result of how the music makes me feel and is usually about an experience that I’ve personally had. I use the song as the backdrop.
We’ve been rather deliberate with the songs we chose for the new record. When we play live these days as well, we have dropped all the earlier songs in the band but one song called “Exit Wound,” which was reworked for greater effect.

Why use an expensive well known name like Howie Weinberg to master your album?
Only a year ago I recognized that as amazing as we’d like to think we are, there are a million other bands thinking the same. The only thing separating us from the others was what we put into the album to make it better. We had a band meeting and talked about where the band was at. We then signed a short-term management company contract to have someone help connect us with the right people. The Inner Light Agency suggested Howie and he did our album for only $200 a track. We had no relationships outside of here and had always been the red-headed stepchild in the Sacramento scene that had to earn everything. Simply put, we are the guys who have done our dirty work and it’s been a long, hard road to get where we are. 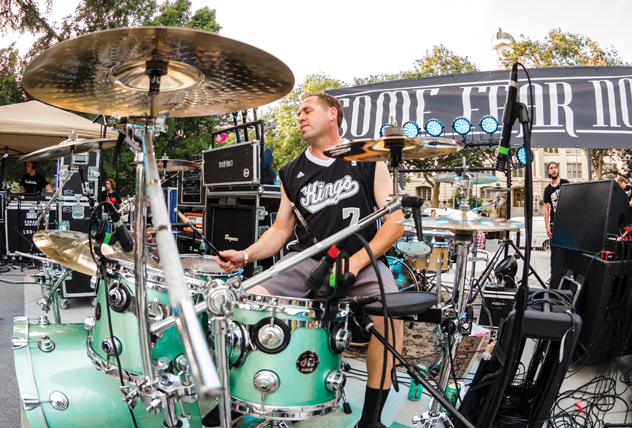 What are some of your favorite markets to play these days and why?
We have tried to trade shows with other bands in other markets, but they have always failed us and not delivered a return show. It’s so much work to set up a trade, and we don’t have the time nor energy to track down bands who owe us a show favor. We need to work on getting out of town. We religiously rehearse two times a week and for every one show in town we play three out of town. With the release of our sophomore album To Live and to Die, we have set our sights on the West Coast and expanding into new markets. These are places where our fanbase is small but notable but there are requests growing to play cities like Phoenix, Los Angeles, Las Vegas, Seattle, Spokane, Portland and more. In 2016 we will be focused on the promotion of the new album by heading out on several mini-tours in support of it.

Do you have some outtakes that will be released on a later EP?
We recorded 14 songs. Eventually, the plan is to release a single for one of the extras called “Driver” that will have an accompanying video. The new album has 12 songs.

Is your end goal to get a record deal or is the band simply concentrating on building a fanbase?
A little of both. We’ve had a couple of indie label offers but my end goal is not to be signed. We’re not desperate to find anyone yet. We are constantly looking to diversify our portfolio and get ourselves seen by as many people as possible. The moment of musical euphoria is just as important to the audience member as it is to us and music is our vehicle to help deliver it.

See Some Fear None celebrate their new CD To Live and Die on Saturday, Aug. 1, 2015, at Ace Of Spades in Sacramento. Also on the bill are Black Map, Sages, Control and Heat of Damage. Tickets are $12 in advance and can be purchased at Aceofspadessac.com. For more info on Some Fear None, visit Facebook.com/somefearnone.