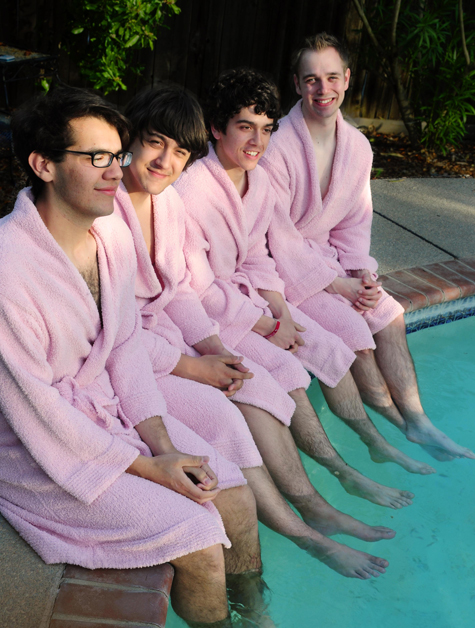 There’s been a lot of crazy shit happening around the world lately–maybe you’ve noticed? Earthquakes, tornadoes, Osama bin Laden’s death, all this nonsense about the Rapture! It can be overwhelming and downright depressing at times to turn on the news or read the newspaper, or, let’s face it, stare at your Facebook feed. For these reasons and so many others, it’s important to have creative outlets in life where you can simply have fun and get your mind off things. The members of local indie-pop-meets-math-rock band The Speed of Sound in Seawater know just this. “If we ever stopped having fun, we would stop making new music,” admitted lead vocalist and guitarist Damien Verrett during a recent conversation in a midtown coffee shop. “That definitely is key.” Fellow six-stringer Jordan Seavers (who also sings) agreed with that notion. “Obviously the music is important,” Seavers said. “But we’re not so much like, ‘We’ve got to make it as a band!’ We just have fun playing music.”

The theory of “having fun” makes its way into every aspect of the band: song titles, album titles, even their promo photos–one of which sees the four young gentlemen dangling their feet in a swimming pool while sporting pink bath robes. “There are so many stupid little inside jokes on the new EP,” said Verrett, referring to the group’s latest offering, a five-track EP released on April 27, 2011 titled Underwater Tell Each Other Secrets. “Lyrically, in titles, so much of it,” he said. “Even the name of the album, it’s just this stupid inside joke. It’s something Fernando [Oliva, drums, vocals] said like maybe three years ago. We were all swimming in the pool and he comes up and whispers to me, ‘Do you want to play underwater tell each other secrets?’” He laughed and continued, “I just thought it was the funniest thing ever, and we remembered it. When it came time to name the new EP we were like, ‘Let’s call it Underwater Tell Each Other Secrets.’”

All jokes and goofiness aside, The Speed of Sound in Seawater are a really talented band, and Underwater Tell Each Other Secrets showcases their ability to blend technically advanced playing (i.e.: a flurry of finger tapping, complicated hammer-on riffs, shifting time signatures and rhythms, etc.) with an undeniable knack for writing pop-y, memorable melodies. When listening to their songs, it’s difficult not to think of one the genre’s pioneers, Minus the Bear. Verrett recalls when he first heard the Seattle-based group. “I remember just finding them randomly on some forum and someone was calling it ‘math-rock,’ and I was, ‘What the hell is that? I’ve never heard of that.’ Then I listened to it and I was like, ‘Well, that’s exactly what it is.’” Verrett went on to explain how he thinks Sacramento natives Tera Melos and Hella are good examples of bands at one end of the math-rock spectrum as far as being “way out there and not as accessible,” and that groups like This Town Needs Guns and Maps and Atlases are at the other end of the spectrum and are becoming “indie sensations who have songs in commercials and stuff.” He went on to say, “I didn’t really know if those two sects of math-rock were aware of each other, but I feel like we’re more leaning toward the pop-y side. I like that about us.”

For Underwater… TSOSIS enlisted Robert Cheek as producer/mixer/engineer and from March 11 to 13 they worked out of The Hangar, arguably one of Sacramento’s most credible recording studios, where they did all the takes live. Seavers and Verrett both agreed that it was a sonic match made in heaven. “I was actually thinking about this last night,” Verrett said. “Just how many records he’s produced and engineered that I’m a huge fan of. There’s got to be like six or seven that are just some of my favorites.” He goes down the line: Tera Melos, RX Bandits, Mister Metaphor; all bands that TSOSIS share qualities with. “It just fit so well,” Verrett said of the pairing with Cheek. “He’s from here, he records all the music we love, he’s really experienced in the genre. He just got us instantly.”

For months leading up to The Hangar recording sessions, the band practiced full-on dress rehearsal style, setting up microphones around them and demo-ing their songs in the living room of the house in Elk Grove in which Verrett grew up. “We actually share the same practice space as Damien’s dad does,” Seavers joked, referring to Verrett’s father’s R&B cover band formerly known as The Detours.

“Once my mom gets home we have to play a little quieter,” Verrett joked. “I really don’t like having to quiet down, these guys are always like, ‘Oh, I’m sorry Mrs. Verrett, we’ll turn it down,’ and I’m always like, ‘No guys, we don’t have to do that!’ It’s really funny, that has to have influenced our music in some way.”

This is a fair assessment, considering TSOSIS rarely use distortion on their guitars, giving their music somewhat of a shimmer and an overall easier-to-listen-to vibe than bands with heavily distorted guitars constantly blasting. “Damien and I both really like jazzy tones and stuff like that,” Seavers said. Verrett jumped in, “And all the distorted parts hit so much harder when they’re so infrequent, you know? If there’s hardly any distortion, you really notice.” Their songs are consciously “loose,” too. Frequently, the skilled musicians will slip in and out of one part into another, sometimes perfectly in sync, sometimes not, giving their recordings an organic feel. “Sometimes I’m like, ‘Man we sound really sloppy, we need to clean it up,’” Seavers admitted. “But then sometimes I’m listening to another band and I’m like, ‘It’s so cool they’re sloppy, I want to play like that.’ It sounds a little more fun when people are sloppy.”

With a new EP freshly tucked under their belts, along with two others (2009’s Blue Version and 2010’s Red Version), TSOSIS has a plethora of songs to pull from when they tour throughout California this summer. “It’s odd that we’re at the point where people are like, ‘Oh your first EP is the best one!’” Verrett joked as our conversation was coming to an end. “It’s like, ‘Are you kidding? That was like $200 and we made it in like eight hours, and you think that’s the best? We just dropped a lot more on this one; you better think it’s the best.’”

The Speed of Sound in Seawater will play at Luigi’s Fungarden on Friday, June 17 alongside Town Hall, The Relatives and The Dreaded Diamond. Show starts at 8 p.m., is $5 and all ages are welcome. TSOSIS will welcome back their former bassist Lucas Ulrici for this show and a number of other performances this summer, as their current bassist Michael Littlefield will be busy recording with his other band, A Lot Like Birds. To learn more about TSOSIS and to stream or download tracks off all three of their EPs, visit Thespeedofsoundinseawater.bandcamp.com.