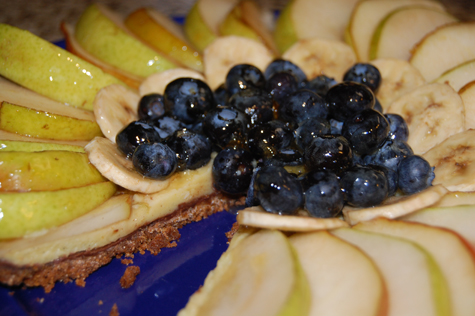 Sick of hearing about New Year’s resolutions? Diets, no-no foods, healthy eating and how to keep that personal weight-loss pledge? Great. Me too.

It seems appropriate then, to talk about tarts. No, not acidic and sour foods. Sweet, fresh, creamy and crunchy fruit tarts! And it’s all IKEA’s fault.

The beginning of anything usually makes for a good starting point for projects, goals and changes. The start of summer, the first day of school, a new job and birthdays are all examples of such change-for-the-better initiators. But the New Year is the ultimate make-a-change marker. Even if you don’t make resolutions, you’ve probably noticed small changes in your behavior that indicate an instinctual human hope for happiness in the future.

Being a human filled with hope for happiness, I set out to organize my living space. The obvious destination was our local IKEA in West Sacramento.

Having only visited IKEA a handful of times, I had memories of semi-expensive, DIY furniture and dÃƒÂ©cor, dispersed throughout a maze-like multi-level floor plan. Visits consisted of not finding what I was looking for and being mesmerized by unneeded wall/counter/kitchen trinkets.

This Jan. 4 visit was different. I came for furniture, but I wanted to conquer food. Sure the oft-Internet-raved-about prepared cafÃƒÂ© and food court dishes are well-known enough, but I’m not sure I trusted them. It was the imported goods and packaged items that commanded my culinary attention.

I entered IKEA at 7:45 p.m. in search of a dresser, but I was distracted by dessert. The good news is that I made it out with the dresser of my choice. The great news is that I was inspired to concoct my own Swedish sweets. Since I’d just seen a newer episode of Diners, Drive-ins & Dives featuring Scandinavian cuisine one recent late night, I’d had a Swedish craving to satiate.

The mouthwatering mini fruit tart at Ettore’s Bakery (2376 Fair Oaks Boulevard) is a special dessert that I closely associate with some of my favorite Sacramento moments and loved ones. But those little suckers usually sell out before I can snag one post-supper. I knew when I grabbed a jar of orange-elderflower preserves (Sylt Flader & Apelsin) for $3.99 and a box of orange flavored thins (galletas sabor Naranja) for 99 cents, that they’d be integral ingredients for my own version of my sentimental Sacramento sweet. Pastry cream, chocolate and fresh fruit was all that was needed to complete one tasty tart.

After I enlisted fellow food fiend and word-friendly pal Pippa, we pooled ingredient resources and resolved to make mini fruit tarts from scratch. It was a first for both of us.

A basic graham cracker crust recipe, using the toasty orange cookies crushed in a food processor, served as the base of our tarts.

The Web proved the most user-friendly recipe finder once again, and Joyofbaking.com provided a simple and straightforward pastry cream filling recipe for fruit tarts. Basics like flour, sugar, milk, egg yolks and cornstarch were blended with split vanilla bean as specified.

We spread a thin layer of melted chocolate over tart crusts to seal the crust and prevent the pastry cream or fruit from making them soggy. I piped some of the cooled pastry cream onto each little crust, and Pippa and I artfully arranged raspberries, blueberries and Anjou pears atop our little tarts. To seal the tart deal, melted Swedish preserves and Disaronno amaretto were brushed over the top to add flavor, make the fruit shiny and gel the ingredients together. 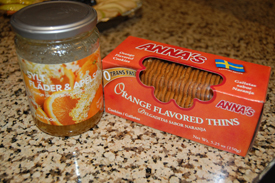 The final product didn’t turn out as refined-looking as we’d hoped (Ettore’s still takes the tart), but the flavors of orange, honey-like elderflower, nutty Disaronno, vanilla, fresh berries and pears were a sophisticated symphony of sweet. And we were sure to share them.
Getting feedback from other tasters can offer insight on palate-pleasing flavors and how to improve preparation of a dish. One wonderfully opinionated taster told me it was delicious, but didn’t taste tart.

This common misconception of the title being the same as the taste led me to find a research-backed definition of why this sweet dessert was called a tart. According to Merriam-Webster Online, dating back to the 14th Century, a tart is any dish (sweet or savory, but not tart) baked in a pastry shell.

Variations on this recipe were easy and exciting. On a second run, I made a large fruit tart with several modifications. I added cappuccino-flavored thin cookies (also from IKEA) to the crust, and used aluminum foil in a pie tin for easy fruit tart removal (not everyone has a spring-form pan lying around). Both Bartlett and Anjou pears were used, along with bananas and blueberries, because they were available at the market for reasonable prices. In the glaze, I used more Disaronno, let the mixture slightly caramelize and was careful to avoid catching pieces of orange rind from the marmalade when brushing the fruit to set.

Moral of the story? Pay attention to food found in unexpected spots—like a foreign furniture store. And positive change (even culinary) can happen any time and doesn’t have to be considered a resolution. But suit yourself while I satisfy my sweet tooth with some fruit tart.