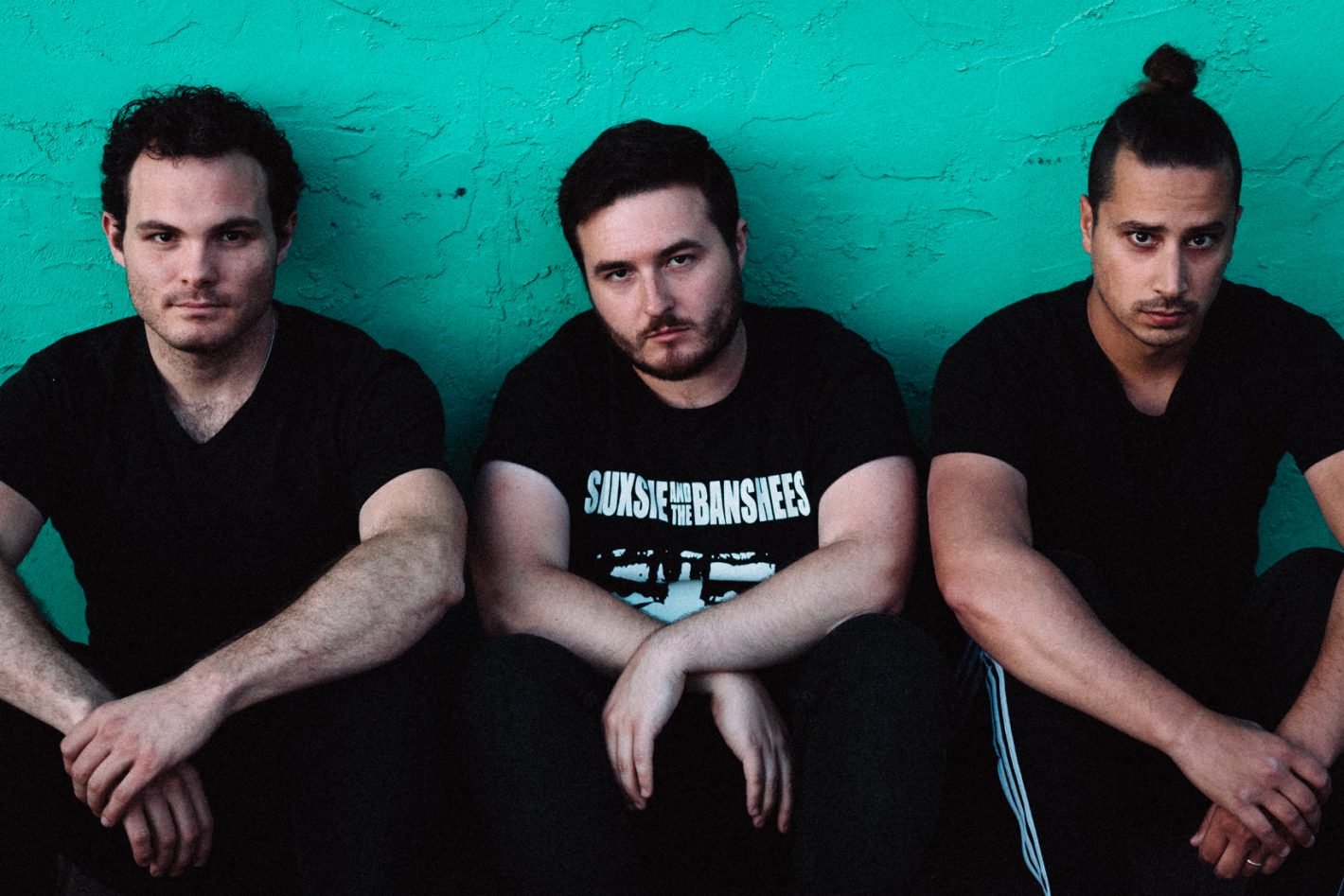 The instrumental rock trio Strawberry Girls is back with a new full-length album called Tasmanian Glow. As is typical for the Salinas, California-born group, it’s hard to pin the album down to any specific genre. Leaping from prog, to funk, to R&B—sometimes in the span of a single song—Tasmanian Glow can be complex in its ambitions, but the band corrals these wild ideas into a more straightforward, poppier set of tunes than is found on previous releases.

Strawberry Girls is guitarist Zachary Garren (ex-Dance Gavin Dance), bassist Ian Jennings and drummer Ben Rosett (also of Eternity Forever and a solo artist). With no official vocalist in the lineup, listeners might find themselves singing along to melodies even though there are no words. For those looking for lyrics, guest vocalists do appear twice on the album. Haley Nicole Woodward of Placerville’s neo-soul band Mookatite sings on the haunting math-rock ballad “Angel Dust,” and Bakersfield, California-born crooner Andrés fronts the rip-roaring closer “Party Nights.”

This time around, the three members of Strawberry Girls found themselves living in different cities while writing the record. Rather than hindering the process, they say it allowed different ideas to float to the top. Rather than progressing linearly and racking up long runtimes, the songs on Tasmanian Glow often return to catchy choruses and head-nodding hooks. Garren and Rosett sat down to talk about the writing process for the new record.

Congratulations on the new record. I know you just got off a tour. Have you been playing the new songs live, and how have they been received?
Zachary Garren: They seem to be doing well when we play them live. We were doing four unreleased ones and two of them slowly got released over tour. So half of them were basically like brand new songs people hadn’t heard and people reacted to them pretty well.

Were all of the songs on Tasmanian Glow written for the record? “First Kiss” and “Party Nights” were released as singles awhile back. Were those always intended for the record?
ZG: Those were just kind of random singles we’d done. We weren’t sure if they’d end up on an album or not. “Sasha” was the first one we released back in 2017. We did “First Kiss” at the end of 2017 when we toured with mewithoutYou. And then we did “Party Nights” last year before our second headlining tour with Andrés, because it was featuring him on the song so we’d do the song every night.

We wrote a bunch of stuff for the album and then we debated whether or not we should have the songs. It kind of ended up that we wanted those songs to be able to be on a record. We still play those songs basically every show, so we wanted them to have a home. It’s cool because they’re all in the same key basically, so they kind of make sense and they’re in the same key as the last couple songs on the album, so they fit well and don’t seem out of place, which we like.

Is there a theme that ties Tasmanian Glow together or sets it apart from records in the past?
Ben Rosett: In the past we all lived close together so we were jamming a lot and writing together, but for the new record we all live in different cities now. Zach demoed out 40 to 50 different ideas, then we chose the 10 best ideas and recorded those. We wanted the new record to be more straightforward and concise and fun to listen to.

On Tasmanian Glow there’s nothing longer than five minutes. It definitely seems tighter in general.
ZG: I think it was a product of how the album was written. We wrote a bunch of stuff for the album but we ended up choosing the poppier, catchier songs. Kind of by chance a little bit, but also I kind of went into it wanting to do shorter, more repetitive but in a catchy way. I want the riffs to get stuck in your head. We tried a different writing style than some of our past stuff that has been more linear with less repeating riffs. It’s cool to have these shorter, poppier bursts of energy that we can throw into our sets and play more songs.

One riff that’s been caught in my head is from “Dreamgirl,” which for lack of a better term feels more classic rock than anything you’ve released before. What were some of the genres you were drawing inspiration from this time around?
ZG: That one specifically, we’ve had that riff for a long time now. I’d say four or five years. We jammed it at practice but I had never written much past that. After a couple years we added the second riff that comes in, and then tried to expand it. For this album I tried to flesh it out a little bit more and we finally decided to do it. As for inspiration, all of us listen to everything, especially hip-hop and R&B. In our songs “Lovetrip,” “Faith Healer,” “Mini Ripper,” they have more of a hip-hop, R&B feel to them. There’s less prog and math-rock this time.
BR: I grew up listening to a lot of progressive rock stuff like Tera Melos or Fall of Troy. I do a lot of music production so I’m into pop, R&B and a lot of that stuff, too.

Ben, I noticed some sound drops you use in your solo records on Tasmanian Glow. Because you all were writing in separate places, were there other musical ideas you have as individual artists that came up more in writing?
BR: I’ve been producing a lot of my own solo music this past year so I’ve just been growing a lot, musically. Performing, recording, production, mixing, all of that kind of transfers over to the band as well. I also really love K-pop and super poppy electronic music like Tennyson, Waveracer and a few others. I love how it gets straight to the melody. I feel like that’s transferred over to the new record.

Do you have any dream vocalists that you’d like to work with?
BR: One of our songs on the new record, “Mini Ripper,” we’re going to be releasing another version of that song with Nic Newsham from Gatsby’s American Dream, but we’re not sure when that’s coming out. I would love to have Anthony Green [Circa Survive] on a song, and Thomas Erak from Fall of Troy.
ZG: Chino [Moreno] from Deftones.
BR: We almost had Chino actually. I lived in Bend, Oregon, and Chino was actually living a couple miles from where I live and we started hanging out. He was going to feature on a song in “Tasmanian Glow” but he ended up moving to Portland and got busy.

It’s interesting that you and artists like Andrés play very different styles of music from each other, yet it somehow works together. Then on top of that, somewhat by virtue of bands you’ve played with in the past, you’re both associated with a post-hardcore or punk scene. Where do you feel like your music fits?
BR: It’s funny because a lot of people assume we’re on Blue Swan Records [the post-hardcore label owned by Dance Gavin Dance guitarist Will Swan; Strawberry Girls is signed to Tragic Hero]. We get thrown into the whole math rock scene, too, though we don’t consider ourselves math-rock. I’m glad to be part of a cool scene of upcoming music, but we’re also trying not to pigeonhole ourselves and make fun music that most anyone can enjoy.
ZG: We’re not too far in any direction, so we’ve been able to do different tours where I feel like most bands would only be able to do one type of tour. We can tour with an indie band like mewithoutYou, and then we can also go off next tour with a metal prog-rock band like Veil of Maya. We can adapt to whatever type of tour we’re on.

See Strawberry Girls live at The Boardwalk in Orangevale (9426 Greenback Lane) on Dec. 13. Also performing will be The Number 12 Looks Like You, Sufferer and headliner The Fall of Troy. Tickets for this all-ages show are $22 in advance, and doors open at 6:30 p.m. For more info, go to Boardwalkrocks.com.