Anticipation was on high for the arrival of Sturgill Simpson at Sunday evening’s event at Harlow’s. The show sold out weeks beforehand and the whole floor was packed to the gills. Arriving nearly 15 minutes before show time, it was difficult to find a spot on the floor that wasn’t jam packed with people. Though it was crowded, much of the crowd seemed as if they were there to socialize and welcome in the Thanksgiving holiday, rather than be attentive and courteous to opener, Lucette.

Lucette was a long way from her homeland of Edmonton, Alberta and was a doomed victim to a room full of apathetic rowdies and drunkards, who couldn’t care less how she sounded or what she was singing about. Regardless, it didn’t really matter to the few who were paying attention because the chatter was significantly louder than the performance.

Given the fact that Lucette was blatantly out of place on the bill, she and her touring cellist did the best they could to get through a somber set of morose, stripped-down numbers. Some notable moments included the performance of new single and confessed murder ballad “Bobby Reid” and a unique cover version of the Ryan Adams tune “Oh My Sweet Carolina.” When announcing “Black Is the Color” (featured in The Vampire Diaries), Lucette made a feeble attempt at making light of the situation by saying, “Imagine sinking your teeth into some teenager’s neck.” What makes the situation worse is that this quote was hard to even make out, since someone nearby was jawing on about how their dream ticket would be to see Def Leppard and Tom Petty on the same bill. Lucette’s sluggish pace and melancholy vibe didn’t stand a chance. 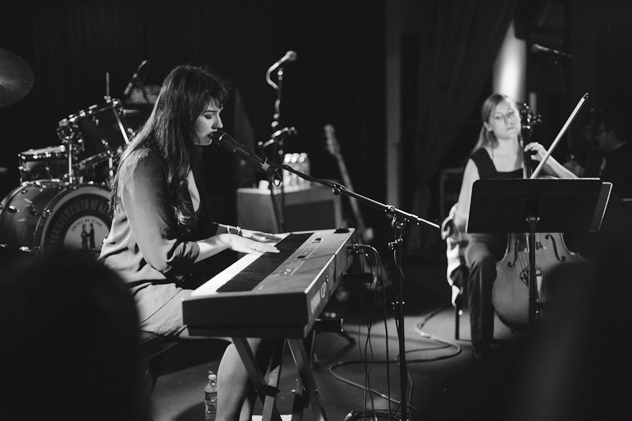 Sturgill Simpson has, in recent times, become well recognized and revered as one of modern country music’s true throwback folk heroes and after a thankfully brief set change, was greeted with a roaring response from eager fans. Sturgill and company wasted no time in busting out “Sitting Here Without You,” which moved along steadily like a high-powered locomotive train, featuring trotting snare drum pops from drummer Miles Miller.

This amped up the audience, but the gears were quickly shifted to sentimental and heart-wrenching with a ballad from Simpson’s debut album High Top Mountain, “Water in a Well,” which tells a story of love and heartbreak. The group followed with “Living the Dream” from 2014’s critically acclaimed sophomore record Metamodern Sounds in Country Music. On this track, Simpson states the painful truths pertinent to today’s society, “Ain’t no point getting outta bed if you ain’t living the dream / It’s like making a big old pot of coffee if you ain’t got no cream.” Classic outlaw country was displayed with “Life of Sin,” which contains a no apologies attitude in tone and content, drawing comparisons to Waylon Jennings, to whom Simpson has often been compared.

Having two solo albums now under his belt, Simpson also has the uncanny ability to restructure cover songs in style and sound to make them his own. Perhaps most notably has been a moody and delicate version of the ‘80s hit “The Promise” by When in Rome, which was played to perfection in the middle of the set. Another grooving tune you could roll your rig down the road to is “Long White Line,” which you’d swear was a Sturgill Simpson song unless it was actually conceived by Aaron Tippin. Lead guitarist Laur Joamets shined on “You Can Have the Crown” and “Sitting Here Without You,” with super speedy licks as if they were meant for a honky-tonk. “It Ain’t All Flowers” was very unique in style by blending laid-back country tones with psychedelic rock ‘n’ roll. At one point in this song, Simpson howled and screamed a “woo hoo hoo” into the pickup of his acoustic guitar.

Simpson had the crowd in the palm of his hands before the performance even began and throughout the entire evening, remaining calm, cool and collected throughout. There’s no doubt that if Sturgill Simpson and his band mates returned to Sacramento, they’d be greeted with open arms.