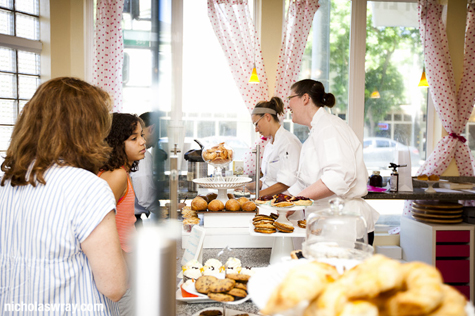 Pastries, I believe, are the truest product of epicurean excess that have never fallen out of favor like many cooking and baking trends, but rather have gained popularity. We turn them away because they’re “sinful” or pass because we’re trimming the fat, but in the end we succumb and rarely are we disappointed (if only just a touch guilty). Recipes for cakes and cookies, scones and muffins are endless on the Web, and TV shows suck millions of viewers in with racy food porn in the form of decadent icing and exotic flavors. We’re eating it up–literally. Sacramento is no different and our options to satisfy our own sweet cravings just keep getting better.

Pastry chef and owner of Sugar and Spice Specialty Desserts, Carissa Jones, opened up shop in January after building the business for three years with encouragement from her father.

With her undergraduate degree, “living the dream” wasn’t paying the bills. And it also wasn’t making her happy. After working in the financial industry for far too long, the day came to put the icing on the cake. 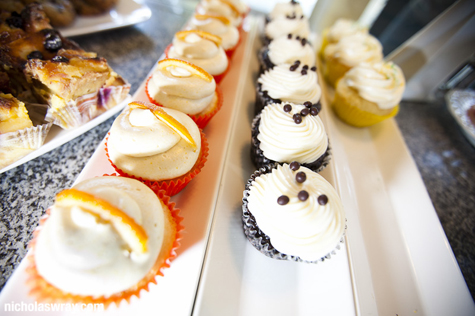 “I had a really bad day at work, which is all it takes sometimes to be that catalyst for change,” says Jones. “So I went and talked to the California Culinary Academy and I started three weeks later.”

Her historic shop is boutique and quaint–a corner spot on 12th and F in the Alkali Flats neighborhood that once upon a time was a pharmacy. The light rail tracks are parallel to her street-side window. As we spoke, a train passed by, a yellow and blue blur that shook the shop momentarily, causing the orb-shaped paper motifs dangling from the ceiling to bob and sway. Pink polka dot curtains flanked the windows, luring curious pedestrians and 12th Street traffic into the tiny lobby where a display case full of tasty treasures awaited. Regulars were in the shop, picking up an item or two on their lunch break from maybe the neighboring state EPA building or the courts that are only a few blocks away. Now that folks know that she’s there, Jones says she’s been getting some special requests.

“I had a gal come over the other day and she wanted to do a thank you for a girlfriend; she’d bought her this lip gloss called Pink Cookie. She came to me and said, ‘I need you to take any cookie you have and make it pink,’” remembers Jones. “So we did a mixed berry butter cream on top and some pink sprinkles with some white chocolate. We boxed it up all pretty and she was tickled.”

On the afternoon of my Wednesday arrival, Jones was busying herself with a batch of peculiar and wildly seductive cupcakes–cupcakes in the shape of breasts. I bite my tongue in restraint of the plethora of jokes that might occupy the next couple sentences, and I can only imagine what might come to your mind. Pour some ice on it and relax, because Sugar and Spice isn’t a Silicone Valley pastry shop. Jones wanted to be sure that was clear.

“Don’t take pictures of these by the way. I don’t want this to be what we’re known for,” says Jones, half serious.

But the cupcakes are for a party–a bittersweet party where a female customer will be saying, “Goodbye to her boobies.”

“She’s having a radical mastectomy. This is her second round of breast cancer and so these are favors for the party,” explains Jones.

Jones should be known for her “booby” cupcakes, because it’s a perfect example of the kind of transcendence that something simple and sweet like a cupcake can achieve. Jones is shaping Sugar and Spice to be the kind of business that caters to the customer, to the hopeful survivor, to the vegan wedding guest and to the passerby who is simply craving a tart. 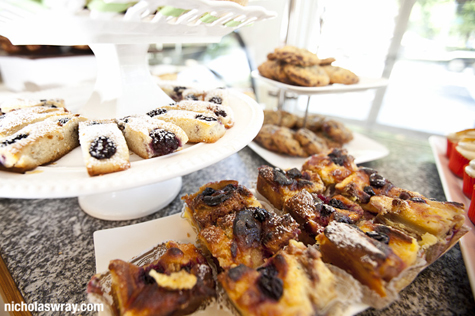 Jones’ selection covers much ground. Croissants, crÃ¨me brulee and cream puffs anchor a pastry menu that offers the classics, reinvents the usual and even adds a bit of kitschy fun. For example, a must-have is the s’mores pop tart with house made pastry dough, graham cracker, chocolate ganache and topped with a slab of marshmallow that is toasted per order. Look out, girl scouts ‘cause this s’more is grown up. Also, be on the lookout for anything with fruit in it, especially if it’s seasonal. Jones makes frequent trips to the farmers market to hand select fruit, and that means that the freshness and sweetness will be on point.

Sugar and Spice is available for weddings, special orders or unique requests. Whether you desire something elaborate or simply must have a peach cobbler, Sugar and Spice is a destination well worth your investment. And try not to feel guilty, because I sure as hell never do.