No End in Sight

Evan Bailey is the kind of guy you might go out of your way to ask if he would bring his guitar along on a camping trip, especially if you were already familiar with him as a songwriter. If he asked you to bring a harmonica, you would, because he’s a nice guy and he won’t get bummed that you’re not that good at harmonica.

Bailey has been fronting local alt-rock band Sun Valley Gun Club since the breakup of his former band, melodic-hardcore act Carry the Torch. When that band couldn’t find a dedicated vocalist, they called it quits.

But I guess they were so sad about the breakup of that band that they decided to continue on playing music together. With the recent addition of former Der Spazm bassist Ashley Maiden, the band is pressing forward.

They’ve put out several recordings, and just finished another; a self-titled album recorded with Jack Shirley at The Atomic Garden, due to be released this November.

“This specific record was probably the most effortless project I’ve ever been a part of. Travis and I started writing the basic songs together. It was a really nice thing to be a part of. Like, introducing Ashley to playing the bass, everything she wrote just worked,” Bailey recalls of the writing process.

Shirley, formerly of Bay Area screamo group Comadre, provided an environment conducive to recording, according to Bailey. Shirley has worked with bands ranging from black metal/shoegaze group Deafheaven to pop-punkers Joyce Manor in the past, and his consistent professionalism proved to be quite a boon for Sun Valley Gun Club.

“No matter who you record with, its important to have good rapport with them. I think we all feel comfortable working with Jack,” Bailey says. “I really like the way he sets up, he’s very efficient; it almost feels like you’re coming to a show. You set up and you play. Jack doesn’t make super-polished records, there’s always an edge to them. Just sonically they’re very different.”

This album is at once a nod to bands like Dinosaur Jr., Pavement or even Ben Kweller, while venturing into odd, abrupt, angular moments not unlike more recent Tera Melos, a la Patagonian Rats. If you ever found yourself browsing a Jade Tree Records mailorder catalog, this could have been one of the albums you hadn’t heard of but found you really enjoyed when it came.

This record doesn’t feel loathsome the way grunge did, nor does it seem technology-phobic. The lyrics aren’t buried in symbolism or psychobabble. It sounds like a person making sense of life, religion and relationships through catchy rock songs. 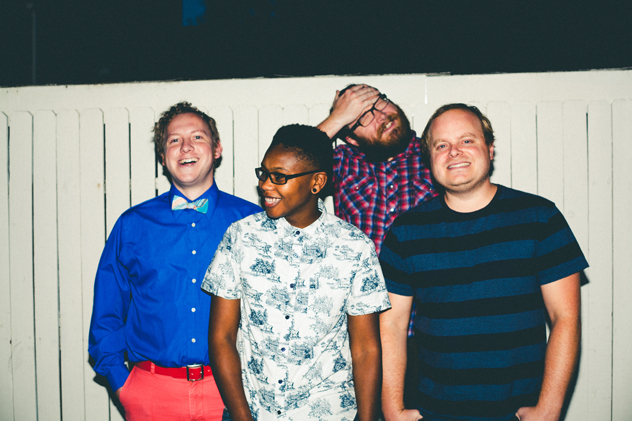 Where did the name come from?
Evan Bailey: It’s this idea I had: If you were to go to Sun Valley, that maybe there’d be this place where Arnold Schwarzenegger and Oprah Winfrey would be shooting guns in this fantastical image I have in my head, of a place where the richest people in the world go and kind of perpetuate this violence, but in like a fun setting. I guess it’s a metaphorical gun club. It kind of represents the violence present to keep society the way it is.

The biggest reaction I get about the name is from people who actually live in Sun Valley, Idaho. They’re always wondering if we’re making fun of Sun Valley, or using the name in a derogatory way.

Is this just a continuation of the last album, or does this feel like a departure from the other album?
EB: The writing process on this album is different than the first one, and the band is definitely different than on the first one. It’s a more cohesive beast. It’s a completely thematic structure, as opposed to the first record, which was more like a collection of songs.

One of the songs talked about reality not being what you were told as a young person. Is this a reflection of growing up in a religious home?
EB: Yeah. I was in a strict, non-denominational, Christian home.

Ashley Maiden: Yeah, me too. Basically, there was no Halloween, no holidays. Everything was so rigid.

Do you feel like having grown up that way leaves you resentful of religion? Maybe not resentful, but does it seem different now to you? Do parents seem like they are getting a little more agreeable?
EB: I’ve definitely seen a change, from the time when I was a kid until now.

I guess the record is also about my relationship with my dad, and how I love him, and how I want a connection with him, and how religion somehow steps in the way of that.

AM: Yeah, even with my dad, it was like, you can’t live any sort of secular lifestyle and live in this house, so I was like, “See ya!” [Laughs] It’s terrifying growing up only knowing one way, it can feel overwhelming when you suddenly have so many more options.

EB: When I was a kid I had heaven to look forward to, you know, it’s like, when you follow God’s path for your life, shit’s gonna be chill. But then you see reality …

In this day and age, where everybody has a band, everybody has something to say or articulate, does it even matter that we sit here and have these conversations about why an artist does what they do? Sometimes I feel like we’re all just in music gangs.

EB: We have a paradigm where we continue to do something futile just because … that’s how it’s done. Like, when you play a show, the singer sets up right in front of the drummer, and even though that may not be the most effective way to do sound for the audience’s perspective, but that’s just what we accept.

The only reasons I write or record music is so hopefully someone else hears it and goes “Yeah, I relate to that,” because that’s how I felt when I was younger listening to music. So that’s the only reason why, it’s like sending a message into space, maybe there’s someone on the other side, maybe there’s someone there that’s gonna hear it and say like, “Hey, I’m here!”

AM: Yeah it’s definitely encouraging. Otherwise, I’d just be in my bedroom, playing music and never doing anything outside of it. I also feel like it helps to cultivate more relationships to create more music and further that sense of community.

Sun Valley Gun Club’s album release is on Nov. 13 at Old Ironsides with Ghost Pines, Ghostplay and Couches. There will be a $7 cover for this 21-and-over show, which starts at 8 p.m. For more info on the band, check out Facebook.com/sunvalleygunclub.