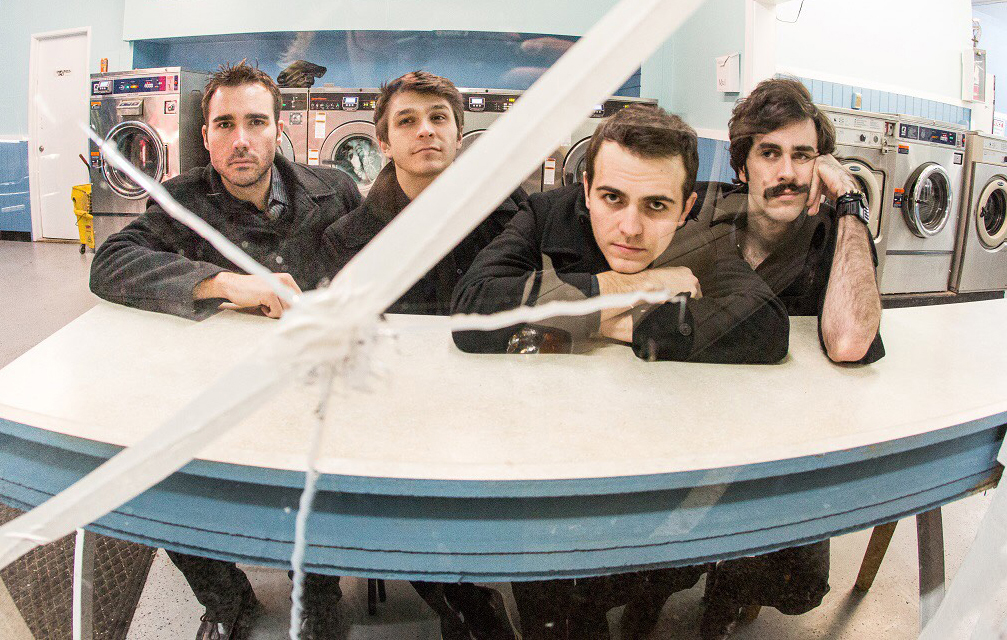 If you log onto Spotify, you can pretty easily locate the artist page for local band Sunday School. On that page, you will find their recently released self-titled EP, a single from 2016 entitled “That’s Reasonable (I’m Not),” and a three-track single for a German house band from the mid-‘90s.

This article isn’t about the German house project.

“That’s when we were big in Germany,” laughed Will Heimbichner, singer of the local, more recent Sunday School. “What’s kind of funny about that band is for a while our whole goal for a minute was just to be the Sunday School that showed up above that, so we could say, ‘Hey, we’re on Spotify,’ ‘Wait, you’re a German house band?’”

Maybe they can organize a tour in Germany someday and hilarity will ensue.

Heimbichner and guitarist Alex Giddings met in high school at the age of 14. They formed an almost immediate friendship due to a mutual interest in video games, and, over time, that grew into a bond over music.

“I had on a Halo shirt,” recalled Heimbichner. “A really cool Halo shirt that I special ordered, and Alex came up to me and told me that he thought the Halo shirt was super cool, and I was like, ‘Yeah, uh, do you want to go play Halo?’ and that was pretty much it.”

The two friends have played in numerous acts together over the years since they were teenagers—recently in projects The Cosmonauts and Manos Hand of Fate.

“[The Cosmonauts] was pretty funny,” said Heimbichner. “We dressed up as superheroes, but that’s pretty much finished for now. And there were a couple of other little stints in there somewhere. This is so far the best stint.”

A few years ago, Sunday School began to take shape. Heimbichner ended up going to school at Sierra College and meeting bass player Zachary Green, and recruited drummer Cameron English when he was working at a local call center.

Despite being the one putting things together, Heimbichner is very explicit about his relationship with Giddings: “I guess I’m always the mastermind behind this stuff … I guess you could look at it that way,” Heimbichner said.

“But, I never have any success with anything without Alex also in the band. I can’t really write songs well without Alex there to help do it. It’s the truth.”

“We do have matching tattoos,” Giddings added. “I wouldn’t say deeper than blood, but it’s pretty deep.”

“We’ve pretty much been in all but a couple of bands [together],” said Heimbichner. “We were the same consistent people, not the same kind of music or anything, just different adventures. We just work really well together.”

Sunday School held an EP release show on April 14, 2017, for their self-titled debut. The album was recorded at Fat Cat Recording with local heavy hitter Sean Stack. While the band currently has a catalog of a dozen or so songs for live shows, they wanted to whittle it down to just the hits.

“Those were the strongest ones,” said Heimbichner. “They fit really well. We had different music video ideas and made a music video for one of them. Just sort of lumped together with a few things, what we felt would sound good on the radio. That kind of was a deciding factor.”

“We talked about it when we recorded [the EP] with Sean,” said Giddings. “How this is kind of like our resume to people that don’t know us.”

The album is a fabulous four-track power pop effort, with some lovely nods to bands from the late ‘90s in particular. A quick perusal of local journalism blurbs regarding Sunday School from their short history will quickly produce some of the associated acts people tie together with the band’s current sound: Built to Spill, Supergrass, and most notably, Weezer.

“Alex and I, we both really loved Weezer growing up,” said Heimbichner, “and obviously that can be heard in our music. Especially with ‘Hold your Breath,’ you can totally hear it, the influence from Pinkerton.”

But with direct comparisons and music, while being told that you sound like a band you admired growing up is an honor to many—if not most—there’s always the instinctive desire to be seen as individuals, to have your own sound.

“I want to personally move past that [late ‘90s sound],” said Heimbichner. “There’s a ton of great music from that era, and I love Built to Spill and Supergrass and Weezer, that was a great band. But, I think for our next stuff, I kind of want to move away from the power chord-y guitar and maybe into some more complex stuff. Baroque pop would be super cool to do … I’ve always wanted to make a full baroque pop album, with harpsichords and stuff. I don’t know if it will happen, though.”

And Heimbichner isn’t just joking or spitballing when it comes to the idea of moving toward a baroque pop sound. He’s dead serious.

“I feel like there aren’t many baroque pop masterpieces in the world,” Heimbichner continued, “and I would like to add to the catalog. A lot of bands delved into that in the ‘60s, but not very many people play straight-up baroque rock. From time-to-time, we’ll cover ‘Time of the Seasons’ by the Zombies live, and we do it a little different style-wise … It feels like a logical step.”

The key to deciding their evolutionary path lies in decisiveness, which, Heimbichner admits, is not something he comes by so easily.

“I honestly get pulled in a lot of different directions when I start thinking about what I want to do,” said Heimbichner. “As a songwriter, it usually starts with me, I mean, we all get involved with it, but … I have trouble sticking to one thing. I listen to a lot of different music, and I’m like, ‘Now I want to make a country album and a synth pop album or something.’ I need to pick something and move forward with it.”

For now, though, the guys from Sunday School really love how the EP turned out, and are currently focused on promoting that, and over the next year or so they will strategize where to go next.

“We’re looking at playing up and down the coast this summer,” said Heimbichner, “but I think we’re still looking for shows outside of this area … maybe down south in the L.A. area. Maybe Portland or Seattle. As far as writing a new album, I have a ton of ideas, as far as a deadline for myself, by the end of the summer to have that figured out, and probably by the end of the year to have everything written. It will probably be 2018 when we start recording.”

No word on whether or not they will consider a tour of Germany.

Check out Sunday School live at Concerts in the Park in Cesar Chavez Plaza in Sacramento on June 30, 2017. Also performing will be Vista Kicks, Hobo Johnson and the Lovemakers and ONOFF. Sunday School’s self-titled EP is available for purchase on iTunes and Amazon, and you can also check it out on Spotify. Follow the band’s adventures at Facebook.com/sundayschoolcanbefun. Check out their video for the track “Hold Your Breath” below.