Down to the Sacred Wave • Sunmonks on New LP, Two Play, and Music as Soul-Sustenance 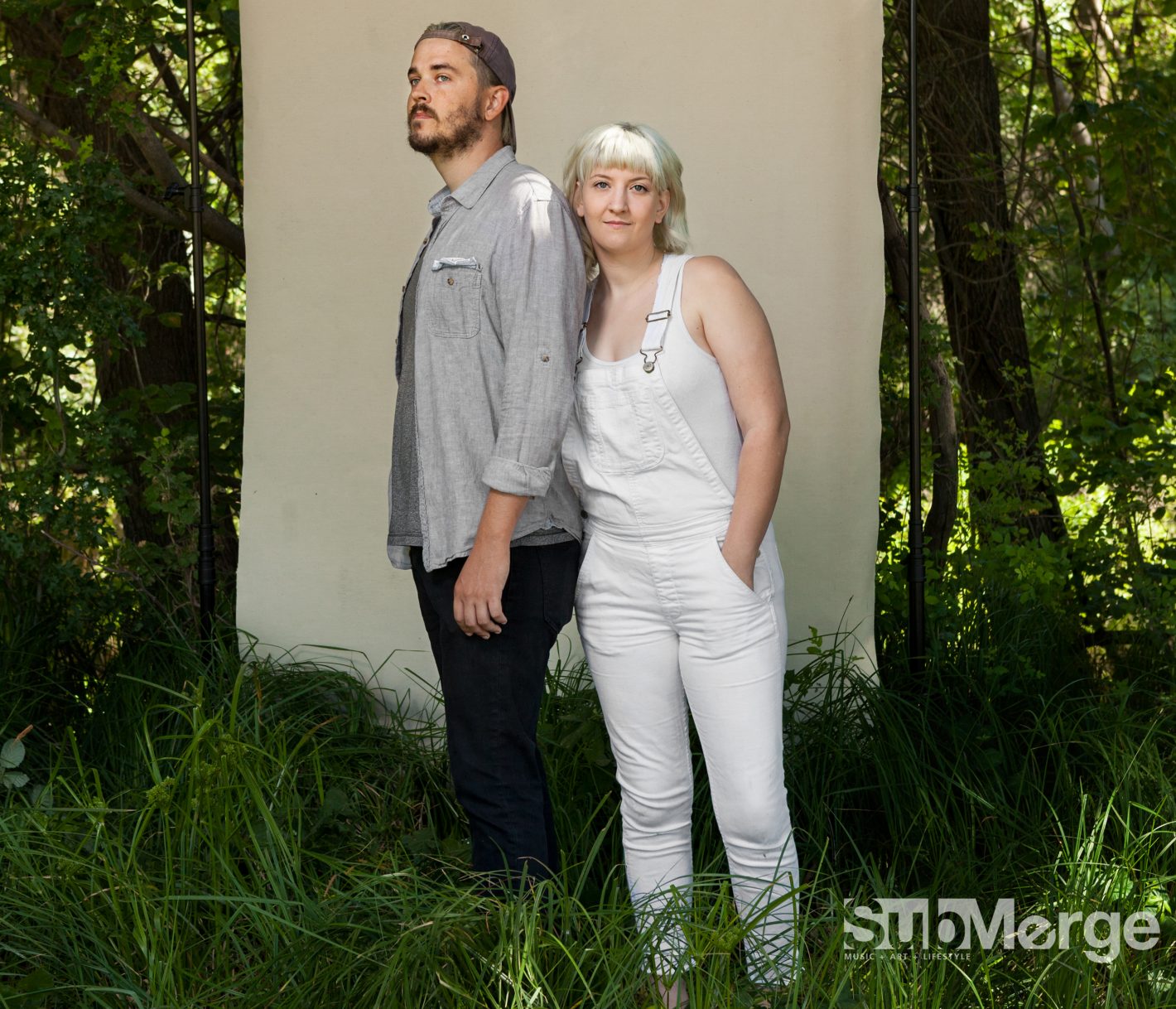 The enduring trope of the NorCal-SoCal cultural divide is a perfectly entertaining way to play up the superficial aesthetic differences of our state’s major urban centers, but neglects the far richer patchwork of the Californias that reside along the margins. The Sierra Nevada foothills is one such kingdom unto itself, where the red state/blue state mentality dissolves into a more purplish tint, spiritual seekers of the traditional and new age varieties rub shoulders together, and rich veins of artistic ferment contribute to an embarrassment of musical wealth, among which the musical entity known as Sunmonks is counted.

The duo, made up of Alexandra Steele and Geoffrey CK, grew together out of the close-knit musical community of Auburn; both came from families where religion and music were intertwined; both received training from an early age, and have retained a sharp ear for melody and an insatiable appetite for all genres. To date, their output has combined earnest lyrics, instrumental and rhythmic complexity, impeccable harmonies and a swirl of influences (among them pop, choral, West African highlife, samba, math rock and jazz). Such chameleonic deftness provides a wealth of possible moods with no single, descriptive brush to paint them with. This may lead to confusion among label strategists, but has only contributed to the band’s growing, eclectic audience.

The 11 tracks on their recently released album, Two Play, act as a catalog of Sunmonks’ artistic evolution over the past several years. Forgoing the traditional retreat, record, release approach to crafting their songs, they’ve tempered their arrangements in full view of their audiences, basing their song selection on the chemistry that can only be captured between the performer, the viewer, and their shared, inexpressible vibe. “We develop everything in public,” explains Geoffrey. “In real time, by looking at faces, you can make decisions about what they like and don’t like. Without that, you’re just making stuff in a vacuum.”

In their music practices and their day-to-day lives, the duo seek a balance between the mystical plane and the real world. Alexandra trains horses, and Geoffrey finds additional inspiration in the countless mysteries afforded by people-watching—from the self-appointed guardian he encountered protecting his beach from encroaching tourism outside a nearby coastal recording studio, to the weathered character who can be perpetually found biking on any given day down the length of the American River. Hovering between a love for the mystical and the mundane, the two have found ways to transform both into fantastically uplifting songs, but never without a drop or two of skepticism—a quality that adds a nervy, new wave intellect to their mellifluous melodicism. All of these shades are on display on Two Play, out as of June 15, 2017, and a perfect record to kick off the euphoric daze of early summer in Northern California. For some surreal scenery to introduce newcomers to the Sunmonks aesthetic, catch their recent, very Jodorowskian video for “Cannibal Wit.”

We sat down with the two to discuss the source of their musical awakening, the constant battle to escape the confines of “genrefication,” and the endless quest to find a wholly new sound. 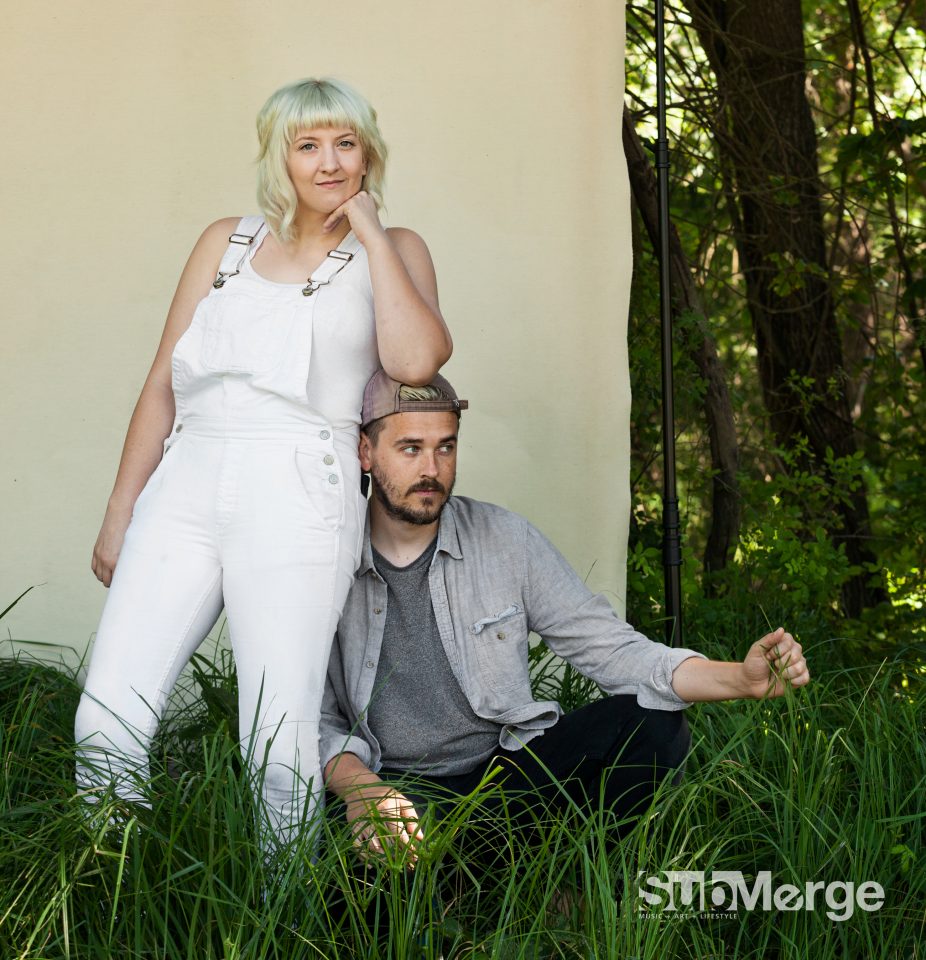 Tell us about your musical upbringing.
Alexandra Steele: I grew up with music in my family—it was a very family-oriented thing. It was never something that I considered to do professionally in any way, it just brought pure joy to me and I just grew up singing around the piano and once I met Geoff, who also played music for fun, but always had a goal in mind for it, that changed how I thought about it. Getting more technical about how I sing and a purpose for how it comes out, and how I want it to be portrayed—focusing on the very minute movements of my voice, that was super exciting for me—that’s what pulled us together. We wanted to do it big. Or try, at least.
Geoffrey CK: We both had a super-religious American upbringing. She comes from the Church of the Nazarene, from the second great awakening, when a bunch of American religions were kind of splintering off of European denominations, and my family was Mormon, which popped up around the same time. And that kind of culture doesn’t lend itself to using music as a commodity or utility. It’s just like eating—it’s something you do that is its own reward. It’s also part of that hill folk mentality that comes from Nevada County. And in that area you have people like Daniel Trudeau from Pregnant, so many different artists; people who breathe music and art as a part of themselves rather than some kind of at-arms-length representation of themselves.

Would you say there’s still a hymnal quality in your work?
AS: For me, I purposefully changed the way that I sing a bit away from that. My grandmother, who taught me how to sing, she was the leader for the church musical department. I had a lot of vibrato in my voice. I could sing the other way, but that was what I liked to do, like opera. I moved on to jazz stuff, but I think I’ve totally changed how I sing from when I was younger.

I think it was difficult to just find my voice instead of attaching it to my favorite singer and trying to mold myself after them. It was part of how I learned to sing, but now it’s about what I sound like, and what I’m comfortable at, how can I tweak and manipulate it to get what I want out of it.
GCK: I think we’re just very conscious of the practical uses of music in different genres. Choral music—experiencing it multiple times a week in church, you really start to understand the emotional effect it has on yourself and an audience. So you can kind of cherry pick those effective musical elements.

There’s quite a variety of different instruments and genre elements put together in your music. Do you have a way to categorize it, or do you avoid that?
GCK: The original scheme for this project was to form a band around it, like a big ensemble. My dream was like Fela Kuti, not the music, or even the sentiments in his music necessarily, but the idea of this rollercoaster sound that’s generated by this giant collection of people. We wanted to make, especially with this record—which might have been overambitious—we wanted to make something that didn’t exist. Part of that came from wanting to be excited by what we were doing, to feel that this is something that, when people hear it, they won’t be able to say “Oh, I know exactly who I should bill them with.” But we’re also running into very practical challenges, where we’ll take a meeting with a label and they’ll say, “This is fantastic, but I have no idea what I would do with this or who the market is.”

People don’t know what the DNA of this music is, so we’ll often be billed as “world music” or with “world” bands. I don’t really like “world music,” I just happen to like Fela Kuti. I don’t even like that phrase. Tony Allen, Fela Kuti’s drummer for years, basically called it a racist term, because it simply meant anything that wasn’t from England or America. It essentially groups the world into two poles. It doesn’t create an open door for cultural give-and-take, or a recognition of the difference between genres in different regions. They’re just billed together. Sometimes we’ll run into the opposite, where people hear more of the indie rock instincts that we may have, Arcade Fire-y kind of elements, and they’ll bill us with a straight up guitar-bass-drums rock band, and that always confuses me a little bit, because when I go see a show I want to see a bunch of different things. That’s why festivals are so successful, because you can curate your own experience. You can genre-hop.

Do you think it’s more common these days for listeners to just scrape along the surface when it comes to music?
GCK: It’s frustrating to see a lack of nuance in the way people listen to music. For instance, the opening song of the new album is called “The Monk,” and it’s about art movements and a personal conversation that I imagine artists have with themselves about why they make or don’t make certain decisions, and there’s a lyric that goes “Dada, Dada,” and it’s a reference to the Dada art movement of the 20th century. This blog I’d submitted to at one point got back to me, and they basically said about that part, “We don’t like the bubblegum vamping. The daa-daas, it just sounds too bubblegum.” But it’s not just mindless. Nothing is an accident.

How did you get all the great brass parts on your album? Was it hard to find musicians to play the parts you wanted?
AS: Part of the struggle is just finding people that can switch their mindset and play with different feels, because people get stuck in the routine of what they’re used to playing, and they hear something and might automatically associate it with what they were playing before, but we push them to go just a little bit off that path.
GCK: Oh yeah, it’s a struggle especially in Sacramento, because there are so many fantastic musicians here, but most of ones who have the technical capability to do some of this stuff, they’re older, work state jobs, versus big cities that have more hustle-type musicians who are open to it and really good, who have the same thirst.

Recording the brass stuff for this record, we talked to two different brass ensembles, bringing them the sheet music and the songs, and both of the band leaders got back to me and basically said, “This is wrong.” Like, “Technically, this is wrong.” I had to go back through the sheet music because I’m self-conscious. I’m willing to take criticism, so I assumed I must have done something weird. I combed through it all trying to see if I’d written something out of range for a specific saxophone and nothing was out of range. It just stretched the technical capacity of these instruments.

We eventually we got this one guy, Jacob Gleason, who plays all these instruments, including any kind of saxophone that you could think of, and he took one look at the sheet music, and was like, “Oh yeah, no problem.” And just slayed it the whole day. I think we tracked four saxophones for five different songs in one day that he had gotten the sheet music for only a week or two before.

How would you compare the live experience to Sunmonks on record?
GCK: I think that people like our recordings, but the way that this band has always generated interest has been through people coming to see us, and you’ll see it in people’s faces, where they have these kinds of “Aha!” moments where it all makes a little more sense. It translates better.