Sunmonks and the Organic Evolution of Sound

The day after Halloween carries with it the reputation for temple-crushing recollections of a costumed evening prior spent howling at the moon. Burning the midnight oil. Chasing the dragon. Whatever your bag may be. When I catch up with Sacramento’s Sunmonks, it’s as if this were some distant reality unlikely to affect them, rather than the possibly rough-hewn phoner I’d partway anticipated. After all, we’re talking about a band here. It’s not as if musicians don’t hold their own reputations for debauchery even without the benefit of an annual excuse.

The fact that Geoffrey CK (vocalist, guitarist) and Alexandra Steele (vocals) were unaffected, uninvolved and ostensibly clear-eyed as we spoke Nov. 1, 2014, over what may have been a PA system/speakerphone hybrid at an unidentified house speaks more astutely to the nature of their music than you might think. Centered as they are around mitigating the dependencies of contemporary approaches of songwriting, Sunmonks’ tendency to side-step the familiar has become a strong-rooted foundation on the relatively new group.

“We’ve written a lot of songs that we haven’t recorded and that will never be recorded and that we wouldn’t be able to remember,” explains CK. “We’ve written a lot of songs we won’t perform, that are kind of dead. So in one sense, we’ve been a band for a long time, or at least a duo for a long time. But we just did it because it was part of life. Now we’re making our whole life music instead of having music be part of life.”

CK and Steele met in 2005, as they report, both immersed in a tight musical community in and around bucolic Auburn, California.

“We didn’t really care that the other of us played music,” says CK. “We just became friends and hung out a lot. I would write songs and play in bands and she would be around. Sometimes a band I would be in session with or playing live with would have a part they’d want sung and because she was there she would sing it. People liked it, so we started to play together.”

It wasn’t until around 2012 that CK and Steele settled on the direction they wanted to move toward as a musical entity, together. Prior to that, the duo wrote songs and sang together without any intentional path. Utilizing the admittedly modern benefits and staggered, textural whimsy of a loop station, CK began crafting songs like building blocks, creating demos by stacking parts over acoustic guitar and adventurous melodies and harmonies between himself and Steele. The formative wellspring of what would become the Sunmonks sound and ethos—so innately anti-modern—was stemmed from incorporating very modern technology.

This fact is important to the story of Sunmonks. Their debut EP In a Desert of Plenty—released Oct. 28, 2014, via Crossbill Records—explores themes, rhythms and melodies culled from myriad primal influences. Eschewing the parameters of what CK describes as a “paint-by-numbers” approach to songwriting, Sunmonks’ compositions are put through rigorous litmus tests by the band—now also including Julian Loy and Dave Middleton on drums and bass, respectively—unspoken though they may be.

“There’s no wrong way to make music,” begins CK. “But in terms of how much fun you’re having or how much you want to surprise yourself, I think it’s a lot more fun for us to play with people and even to start writing with people than recording yourself as a person on a computer.”

“Geoff still makes demos [with a loop station],” clarifies Middleton, “but he’s a great writer and arranger, so they come fully formed. A lot of music is written with loops in modern times, but one of the unique advantages from taking a looped composition and laying it out organically is you get these unique moments of chaos or these little human things that wouldn’t otherwise happen. I feel like that’s where we’re at now.”

For CK, citing inspirations like David Byrne and Fela Kuti (some symbiosis of the two may approximate the percussive-heavy, tribal pop R&B mish-mash of Sunmonks’ oeuvre) instigates the internal conversation he has regarding what the purpose or relevancy or resonance a particular song might have prior to even being shared with anyone else.

“It’s a more religious experience instead of a more scientific experience,” says CK. “That’s something that really excites me about music in general: some deeply profound or magical, primitive thing.

“People who write using plug-ins or gridded beats or things like that, I don’t know that they necessarily intend on having a religious experience while they write. Oftentimes it’s sort of feeling their way through it. It’s like, ‘this is super dark, so I like it,’ or ‘this is intense, so I like it.’ Then a listener hears that and they have a religious experience. Which I guess is the point anyway. But with me it has to start that way or else the song doesn’t survive the point where I can even show it to anybody else.”

On Desert of Plenty, the EP’s four songs play from most recent song written, to oldest song written, alluding to the recording’s nomadic snapshots, as this collection of songs was written and recorded over long periods of time and in mostly different locations. In an attempt to include some sonic congruency, the four songs were mixed together at Panoramic House studios in Stinson Beach by the band’s producer—and Tape Op publisher—John Baccigaluppi.

Special attention was given to eliminating the use of cymbals, as Afro-beat progressions bubble and bloom throughout the title track. Elsewhere, on the outstanding tune “The Deaf,” Sunmonks’ affinity for superb horn arrangements, densely layered textures and feel-good romps ripe for dance-alongs is made plain. Geoffrey and Alexandra’s voices weave together in primeval harmonies, expounding ancient melodies that create bridges between the organic inspirations they covet and the contemporary crutches they’re all but beholden to. To wit, the band says Desert of Plenty is a record of where they’ve been, with their upcoming 2015 LP aiming at where they are now.

The fantastic “Golden Words” ushers in yet another dynamic for Geoffrey and Alexandra’s quiver of songcraft, with fissures of funk cascading over sultry R&B melodies. Still, overused genre classifications do little to discern the lively vibe of Sunmonks’ sound. Those aural observations, as we’ve learned, are triggered by the energies dispersed during the composing of the songs. 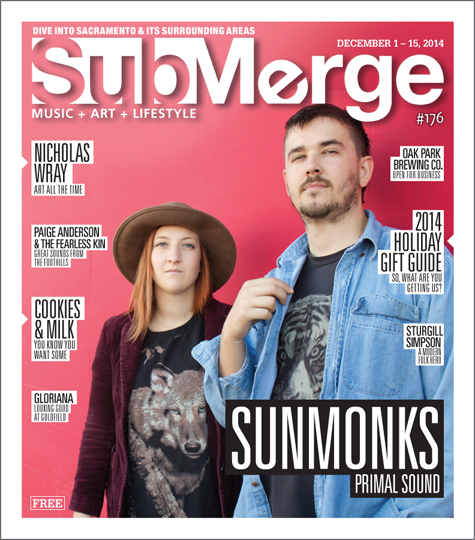