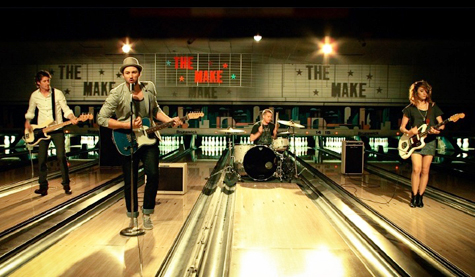 Green Bay Packers quarterback and reigning Super Bowl MVP Aaron Rodgers, a native of Chico, Calif., has launched a new record label called Suspended Sunrise Recordings and with it a group by the name of The Make. Comprising of core members Jeff Schneeweis (guitar/vocals), Trevor Sellers (bass) and Sarah Ann (guitar), The Make might be new, but they’re not unseasoned. Schneeweis and Sellers both played and toured together for years in the band Number One Gun, who were signed to Tooth & Nail Records, and Sarah Ann has a solo project called See You Soon. Having been longtime friends with the now superbly famous Rodgers, who is an avid music fan (rumor has it he plays a little guitar, too), Schneeweis and crew were able to share The Make’s early demos with him and he thought they would be perfect for his new label. On June 30, 2011 they debuted their single “Get It,” an upbeat pop-rock song along with a polished and ridiculously professional looking video produced and directed by Murphy Karges, bass player for Sugar Ray. To download the song “Get It” for free, hit up Themakemusic.com and to view the video visit click play below. Warning: this song may get stuck in your head for days at a time and cause involuntary rhythmic spasms in your feet, hips and/or neck.