Super Duper • KYLE Might Be Rap’s Next Big Name 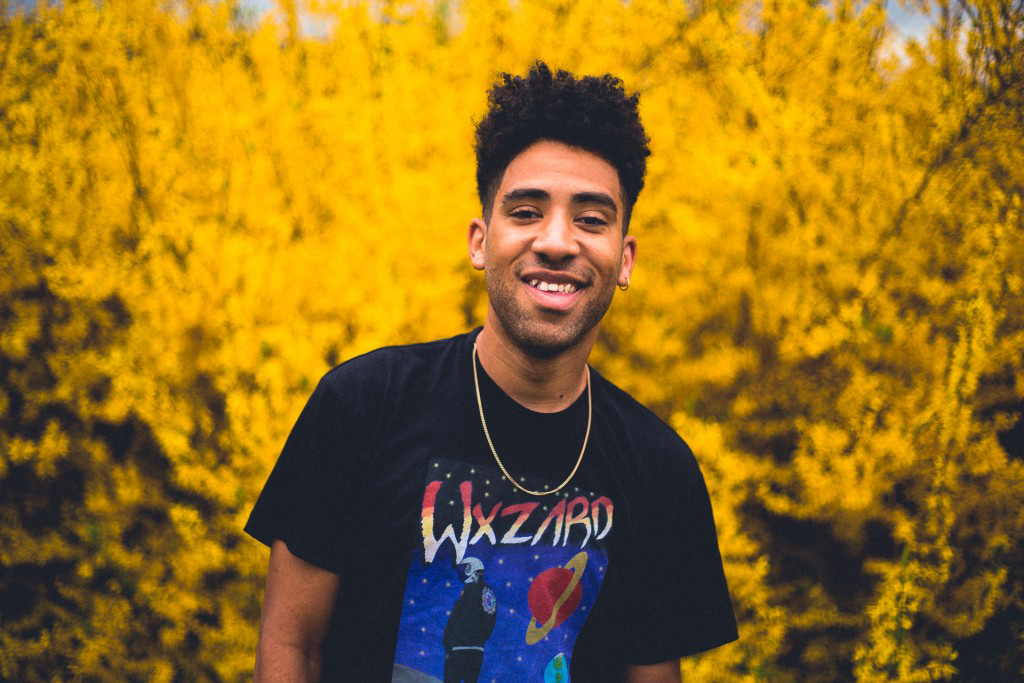 While many people might have been ringing in the New Year at a local bar among friends, Ventura, California rapper Kyle Harvey went riding into 2016 on an 8-foot Wham-O BZ foam surfboard in South Lake Tahoe—bringing the ancient art of crowd surfing back to its purest, most literal form.

He had just finished his hour-long set on day three of SnowGlobe, the first music festival Harvey’s ever played. Because his performance was scheduled relatively early—3 p.m.—he says he hadn’t expected much of a turnout, yet found himself pleasantly surprised when the Sierra Tent grew packed in only a matter of minutes.

“I think the gods just blessed me,” Harvey says, reflecting on what he calls a “very lit” first festival show. “The rap gods were like, ‘You know what? We fuck with this kid. Here you go.’”

What Harvey considers good fortune could probably be better ascribed to a strong sophomore album release this past fall, not to mention a breakout career he’s been zeroing in on for at least a couple of years now.

Following up on his 2013 debut project as KYLE, Beautiful Loser, Harvey—formerly known as K.I.D. and sometimes known as SuperDuperKyle—dropped Smyle on Oct. 2, 2015 to rave reviews and chart-topping success. Smyle peaked at No. 3 on the iTunes Hip-Hop Chart, as well as No. 7 on Billboard’s Rap Albums Chart and No. 53 on its Top Album Sales.

The record itself plays like a never-ending beach summer bash; you can’t help but grin from ear to ear listening to it. Dipping in to ‘80s and early ‘90s dance-pop influences, and even invoking some new jack swing bounce too, the Ventura native offers up a positive vibe at face value. More refreshingly, though, Smyle actually carries a sincere message throughout in Harvey’s raps and singing, delving into some very dark places with a hint of light at the end of every tunnel. In other words, it’s really got a glass-half-full kind of tone.

That was the goal at least, Harvey says, adding he wanted to make an album that could lift spirits by simply hitting the play button.

“I wanted it to be easy for people to wake up in the morning,” Harvey explains. “I wanted to make an album that if you feel like shit and you’re unhappy with yourself … you could put it on and get going. It’s just like, ‘Here, take this good feeling.’”

Having just finished a nationwide headlining campaign in the spring—the King Wavy Tour, named after his popular collaboration song with G-Eazy—Harvey, 22, is ready to venture out yet again this winter.

This time he’ll be joined by a couple of fellow rappers, New York-based Hoodie Allen and Hollywood-born Blackbear for the 36-city Happy Camper Tour. Ahead of the tour, KYLE will be playing a pair of headlining dates, including Feb. 2 at Harlow’s in Sacramento.

Submerge caught Harvey on a phone call to ask him about the newest tour, his thoughts on Sacramento and whether he feels he’s the next “alternative” rapper to blow up, among other interesting insights.

I understand you’re about to go this new tour with Hoodie Allen and Blackbear. Correct me if I’m wrong, but weren’t you just on tour not that long ago?
I was. But I live for touring. That’s my favorite thing, period. Of this entire music industry, in this entire music genre of rapping, my favorite thing to do is to perform live in front of people. I come from a musical theater background—I used to do musical theater and shit. So being on the stage is awesome for me. So the more I can be on tour the better. But yeah, the first stop is going to be in Sac. I’m playing at a place called Harlow’s. You know Harlow’s?

I think it’s like 300. But yeah, go on.
I had nine people there. Nine! My first show at Harlow’s, and I had nine people there. And it was awesome, we went for it. We did the whole thing; the crowd was interacting and everything. You feel me? It was incredible. I think my friends even picked me up and let me crowd surf on their shoulders. That shit was sick, though. Harlow’s, in 2013, I had nine people there. Then the last show we went and did up there [at The Boardwalk] on the King Wavy Tour, we sold it out. But that wasn’t at Harlow’s. So I’m actually really glad to go back and conquer the gates of rap hell. It’s gonna be a redemption ball.

Do you have any other memories or impressions of Sacramento?
The last show we had in Sac—on the King Wavy Tour—was probably, energy-wise, like the best show on the entire tour. And I remember that verbatim. I remember being like, “Damn, we came back here, and we sold out.” That was probably like the most excited crowd out of anybody. And it was the last show as well. It was the very last one. And it just left off so well that I remember, as we were leaving the show, I was like, ‘Dude, we have to come back here. Always. Like, we always have to come back here. Like, these kids, look how much they love us.’ Every tour from now until forever, I will always go to Sacramento.

But you’re not like a damn robot or anything. You’re a person, you have a range of emotions. You can’t be happy all the time.
Of course not. I mean, if you listen to this music, a lot of this shit is sad. That’s what I’m saying. [People] are so afraid of a person like me. They think it’s all, “Oh he’s just smiling. He’s gay.” It’s like they’re so afraid of that, they don’t even really listen to the content. And I think my true fans are people that listen to what I’m actually saying. I’m actually talking about loss; I’m talking about losing family members to drug addiction; I’m talking about losing family members to alcoholism; I’m talking about shit none of these other niggas are talking about. But I’m just doing it in a way that’s not bad. You’re gonna get over, you’re gonna be fine. The sun’s gonna shine tomorrow, it’s gonna be great. It’s just sometimes they can’t really see past that. But if you listen to my music, like “All Alright,” it’s about some shit. I talk about problems. You feel me? I talk about dark things. But I talk about them in an uplifting positive way … But I’m not trying to be philosophical every time. I’m not trying to be fucking Plato every time I hop on a track. But I’m not just out here talking about sugar and spice and everything’s nice. It’s not that. I’m talking about dark things. I’m rapping about sad shit in a happy voice.

You know, based on the research I’ve done, and the media coverage you’ve been receiving, I get the sense that you’re just about where Chance the Rapper was a couple years ago when he came out with Acid Rap and was touring a lot. Within a year, he blew up. Do you feel like you’re at that stage too? On the cusp of your career taking off?
I do. I feel it right now. I feel this shit every day. I feel like this is it in 2016. What day is it?

It’s Friday the 8th.
Bro, it hasn’t been eight days, and I’ve already got so much shit in motion for this year. So yeah, I feel like 2016 is it. 2016 is the year where I’m really trying to continue [my musical efforts]. It’s really just about each individual person you connect to. That’s my only goal. You feel me? Connect to one person at a time, individually. And I think this year it’s going to spread to, like, everyone. After I do this tour, I’m coming out with some new ass songs that are flamin’. And it’s gonna be very tight.

What exactly are you feeling right now? Are you nervous, excited?
This is the thing, I’m excited. To keep it lit with you, in 2013 when Chance first came out and all these people came out—like, I’ve been here the whole time. I’ve been here working as hard as I can. I’ve been here with my team working as hard as I can the entire time. So we’ve been ready. I’ve already gotten over the anxiousness. I’ve already gotten over like, “Damn, when is this gonna happen?” We’ve been here since 2013, and all those other historical events that have happened, we’ve been sitting in the background waiting for our moment. Right now, I don’t feel any anxiety. I feel ready to step into this shit. You feel me? I feel like I’m at a casting call, and they’re like, “And, uh, Kyle Harvey?” I’m ready to just kick the door open like, “Boom! I’ve been waiting here the whole time. You didn’t see this fly ass shit?”