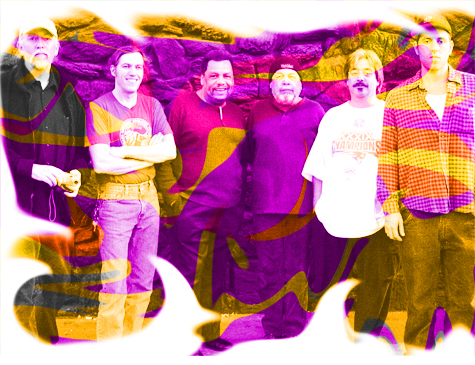 In 1996, Sean Barfly arranged a jam session at Sacramento’s historic Golden Buddha. He didn’t know then, and seems to this day baffled, that the convergence of musicians would generate what is now a decade-long journey into the fluid annals of MindX. Having schmoozed with some of jam-rock’s most well-to-do performers through various grassroots connections, Barfly soon found himself at the nexus of a thriving chemistry of songwriting, one that boasts an Americana/bluegrass concoction, full of extended compositions and brimming with pop culture parody (“a sick, warped, demented, politically incorrect sense of humor,” hails their bio. And it’s true).

The band has gone through some major changes during the course of its career, with the original quartet disbanding in 2000. It wasn’t until Shawn King and Rick Zamora joined in on percussion and lead guitar respectively that the necessary building blocks were in place for a solid future. In 2003, Peter Philis and Martin Holland joined in and the unit was set. MindX was now ready to saturate the avenues of back porch country, wheat-in-yer-cap bluegrass and flannel-clad Americana for a community perfectly poised for it all.

The long-running jam heroes will be releasing their new album, Jonesers and Tweakers, on June 26. The album features an impressive list of collaborators, including Steve Kimock, Melvin Seals, the late Martin Fierro, Jimmy Pailor, Peter Grant, Tony Passarell and others. Despite a heavy schedule, the band continues to be a staple on the Sacramento Happy Hour circuit, while also readying a comprehensive “party band” tour of bluegrass festivals throughout the summer.

Barfly took time out of his schedule (which may or may not include preparing for a solo gig in Amsterdam this August) to discuss with Submerge the ins and outs of one of Sacramento’s most ballyhooed jam bands, as well as exactly what the hell is the Slapaho Nation. Here we go!

It seems you didn’t set out to do anything more than form a band you could jam with. How does it feel to have now been around for over 10 years and have created a sort of niche within the jam scene?
I really didn’t have a vision of putting “a band” together at the time. I had already played in bands and understood the concept of playing arranged songs, but wanted to really try to let go and see what could be created rhythmically and melodically, and wanted to see what could happen with various textures harmonically. What came out of that was just the opposite. The first six years with Gerry Pineda, David Vandusen and Eric Crownover was the first time I was in a real “band.” Sure, there was some jamming, but our strength was our complexity, arrangements and great chemistry for what we were doing at the time. MindX became a jam band after the original band was no longer playing together and Martin Holland, Peter Philis, Shaun King and Rick Zamora joined the band. As far as how it feels 10 years later, well I guess the best description is trying to reinvent what we do and keep it interesting for the band, as well as our fans.

Explain the Slapaho Nation to the novice of MindX.
Ah, the Slapaho Nation. The whole joke started out with our former bass player Gerry Pineda. He was already a busy working professional when we were fortunate enough to have him play with us, but he was unable to play all the gigs we threw at him. He was in demand for obvious reasons, and we affectionately called him a “ho.” We were booked to play the Trinity Tribal Stomp Music Festival, a festival that is a benefit for various Native American Indian tribes that was held in Trinity County for many years. On the way to the gig in our car, we came up with our own tribe called the Slapaho Tribe, mocking the nickname we had given to our Chief (Gerry Pineda), and it was born. The funny thing is, it has never been a gender thing, and it seems it can be taken out of context and turned into a whole other thing that we find ridiculous if you really know any of us personally.

Has being the only original member left in the band done anything drastic to the direction of the band from a thematic or chemistry standpoint?
Once the original quartet dissolved, MindX became more of the band I originally had conceptualized. We were much more of a jam band, and I think the band members had much more in common musically. The new band was open to far more ideas that I had than the previous lineup, but I think that was more because the band had run its course. The direction of the band at this point was directed by me, which were big shoes to fill as the former group was a total democracy creatively.

It’s difficult to pin down the tongue-in-cheek from the serious moments of your music. How much of it is parody, and how much of it is to be taken seriously?
My philosophy when making a studio record is the jam band thing simply does not work in the studio. My favorite parts of the former band are what works in the studio—complexity and comedy! It’s amazing; we will play a show and throw some complex material at the crowd and you’ll always hear someone scream, “White Trash Town” or “Salty Balls” and we have just finished some complex arrangement I have always dreamed of playing, and they want to hear one of my dumb songs about tweakers. But laughing is the most healing medicine in the world, so that’s cool.

Additional information?
A side story that is very important to the band is that we dedicated this record to the memories of Merl Saunders and our good friend Martin Fierro, but most importantly we dedicated this record to our good friend and brother Erik Klevin. He was one of the greatest musicians/people I’ve ever encountered and we (the music community) miss him every day!