Eyes peripherally on each other, ears perked, a trio starts a meditative tune with the strumming of what sounds like a sitar but is actually Jed Brewer’s guitar, specially constructed to mimic the eastern instrument’s twang.

Brewer is accompanied by the methodical drumming of Alex Jenkins’ tabla and either a sharp interruption of saxophone or a deep rumble from a standup bass, both played by Tony Passarell, adding a jazz element to the improvisational piece.

Pieces are a more accurate description than songs for what makes up Swimming in Bengal’s Volume 1 album. Don’t expect to ever hear the three tracks played live. In total improv fashion, the trio plays whatever it feels, when it can, where it can, without notes.

“Sacramento is historically a music/jazz/improv city,” says Jenkins. “We have a deep and rich history of improv that dates back to the 1930s. You can find jazz/improv music every night of the week in Sacramento.”

Chances are, wherever you find that improv, you’ll find Jenkins or Passarell too—and less frequently but just as passionately, Brewer—as all three play in multiple bands, ensembles and jam sessions throughout the city, in churches, cafes, bars, music fests and local art galleries.

Jenkins has been playing drums for more than 25 years and tabla for 12 years. He took two long music study trips to India and attended the Ali Akbar College of Music in San Rafael, California, for five years.

He now teaches “everything drums” and has been a full-time musician since 2003 (often with Passarell) in The Alex Jenkins Trio, The Nada Brahma Music Ensemble, Ross Hammond, Inertia, The Alex Jenkins Sound Immersion and other bands, almost all part of the improv scene.

In 2005, he won a Sacramento Music Award for his work on the self-titled Daisy Spot record release, and another in 2008 for his work with the Ross Hammond Trio.

“It’s better than 90 percent of the crap out there,” Jenkins says about why he loves and plays improvisational music.

For Passarell, the love comes from his musical interests and influences. These include Carnatic jazz, a fusion of Indian Carnatic music with American jazz that both utilize improv; jazz pianist Vijay Iyer; and Steve Coleman and his concept of M-Base, an idea of creating music that relies on improv and has “a very angular and snake charm-y” sound, according to Passarell.

He named several musicians across the country who have mashed eastern sounds with modern jazz, so that’s what Passarell was hoping to do when he first came across Brewer. 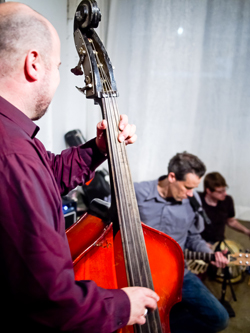 “A few years ago, my wife was teaching at a school and Jed was teaching at the same school (he teaches second grade) and we had a ton of mutual musician friends but had never met somehow,” Passarell says. “He said he had gotten this special gourd/sitar/guitar and I had heard his band San Kazakgascar that has a similar sound I was looking for. I knew Alex Jenkins for years so I introduced those guys and it was just one of those things where we got in a room and started playing together and it sounded good.”

Out of this initial session came Swimming in Bengal, for now an experimental collaboration with no specific musical direction.

“All bands are whatever the musicians bring to them stylistically,” Passarell says. “Because Alex and I are full-blown improvisers, we start at zero and end at zero. You’re using whatever chops you have and whatever you can bring to the table to hook people. It’s already a huge part of Indian music, like Ravi Shankar. He was often improvising.”

Passarell has been part of the music scene since the early ‘70s, starting with jazz but moving into early punk in the Bay Area and Northern California where he grew up.

“My first band that people actually liked was Hunting Game. We used to tour around, had a record, got some airplay, so I kind of got away from jazz in the ‘80s and then went back in late ‘80s. I never stopped listening to it, though.”

Brewer, meanwhile, grew up playing guitar and has been part of several bands in Sacramento since the early ‘90s, even starting a co-op record label, Lather Records, to release his and friends’ music. It’s a low-profile operation, he says, with no recording studio and bands paying for their releases; but with faster and easier ways of sharing music online, the bands have grown their local following easily through the small label.

Brewer’s band San Kazakgascar also has a quasi-Middle Eastern and Indian-inspired sound, something that appealed to Passarell. The differences for Brewer, however, took some time to get used to—where San Kazakgascar is loud, lyrical and structured, Swimming in Bengal is not any of those things. 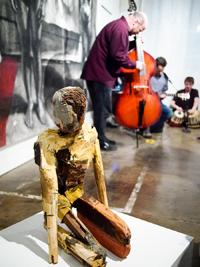 “It was challenging for me at first, but I’m getting more used to it,” he says of improvising. “We’re not doing anything authentic, just approximating those sounds and doing our take on it. [Jenkins and Passarell] come from a jazz background and I come from a more underground rock background. Sometimes we’ll do a show and I won’t have seen Alex for months and we’ll meet up and say hi and we’ll just start playing.”

Swimming in Bengal’s upcoming appearance is at the Davis Music Festival, a place dear to Brewer, as a UC Davis alum and former employee at the Davis-based community radio station KDVS.

“When I was a teenager, I really liked thrash metal so I wanted to play that and then I started finding out about other music when I went to school at Davis and worked at the radio station,” he says. “Even years after I worked there, a lot of great DJs have turned me on to music that influences what I play now. They really opened up my eyes to the weirdo music that’s out there compared to all commercial stuff.”

As for Indian music, Brewer never grew up listening to it, but it’s always affected him.

“It’s minor sounding, and I like the chromatic nature of it too,” he says. “Something about the scales and melodies has always really attracted me. There are rock bands that have a little of that in it.”

The trance-like droning music that comes out of Brewer’s guitar suits the style perfectly, though not everyone may have an ear for it.

“We are pretty straight with the shows—sometimes we’re sitting, sometimes we’re standing,” he says. “You have to really like the music. It’s not really a show-show. You won’t see us jumping around. People with ears more geared toward instrumental like it, so it’s a small group but enthusiastic.”

Passarell separately adds that an audience hasn’t really been built for what Swimming in Bengal plays, but events like the Davis Jazz Festival have been embracing of their style.

“A lot of it is just exposing people to stuff and seeing how they react to it,” he says, adding that this is much easier to do than it was 30 years ago. “That’s a big difference between the ‘70s, ‘80s and now, being able to produce and promote your own stuff, it’s a totally different world. You could barely afford to do anything back then. It was a lot of money. That stuff’s coming around, for bad musicians and good ones. It’s kind of great though because people can decide if your stuff is good or bad.”

With the current Swimming in Bengal album out with Lather Records, and another on the way in a few months, listeners can decide for themselves whether the improvisational East meets jazz sound is right for them. Check out Sanskazakgascarsolo.bandcamp.com to order the CD or download the album. You can see the band live as part of the Davis Music Festival on June 22, 2014. The festival will feature 54 bands playing in 11 venues from June 20–22. For more info, go to Facebook.com/davismusicfest.