Talk of the Town! at Holy Grounds, Marysville

At first glance, the venue appears as if maybe you’ve ended up in the wrong place. Surely this tiny, tucked-away, church building is not the chosen location to house four local bands and their throng of supporters for the evening. What in God’s name (literally) is going on here? As I walk through the front doors past the merch tables, crew and into the stage room I find myself staring at amps, guitar cases, cables, drum kit pieces and”¦a large mounted cross. Oh, yes. This is definitely a church. And the congregation of young music-lovers shall be praising the rock ‘n’ roll Gods tonight.
A flurry of action catches my eye and I realize the first band is up real soon, and the stage is looking real empty. Push Push Pull is up first and its members were definitely going to have to push and pull their shit together to start on time. Luckily the old adage of “working better under pressure” proves to be true in this case and the rushed set-up does not affect the performance. Self-described as a cross between The Rocket Summer and Cute Is What We Aim For, Push Push Pull produces a mellow, melodic sound which reverberated through the room with dance-y power chords and steady synth strokes. The band’s debut EP, The Handsome Reward, is scheduled to be released late next month and sounds promising.
Nicky London, singer of Everyday wastes no time quickly jumping up on stage and chatting up the front row. Dressed in designer jeans, a trendy V-neck and caught on what seems to be the third day of not shaving, he is especially popular with the ladies. It comes as no surprise that the Roseville native knows how to work the crowd, emerging from well-known acts such as Rip Nicky and With Hearts of Heroes. Only one other body takes the stage, that belonging to Austin Haymen, guitarist. The acoustic duo swoon the masses and I can almost hear hearts breaking all over the room. Hell, I almost fell in love within those fifteen minutes. With uh, Austin’s guitar playing, duh. Coughcough.
The band up next admits it’s going through a lot of changes, and I think it’s safe to call that an understatement. The vocalist’s range is all over the place and sloppy tuning on all instruments is apparent. I ask the guy next to me to check my ears for bleeding. People begin leaving the room midway through their set. I’d have walked out too if I didn’t have to write this review. The Paper Melody, Brightest Light or whatever they’re calling themselves this week did a poor job of keeping the audience engaged and at a small venue like this, that’s a huge point blow. After a few songs of experimental rock terror, it’s over. Hallelujah.
After a seven week tour, the boys of Talk of the Town! are up and happy to be home. The room fills to maximum occupancy and at the risk of getting shoved aside I scurry toward stage left and post up. Only a few notes into the opening song “The Remedy” and everyone’s already rocking out. Two girls in particular are stoked as ever and squeal when singer Tyler and bassist Bryan motion for them to move in closer. The Yuba City five-piece definitely bestows upon all in attendance a musical spiritual experience. With over 33,000 friends on Myspace who dig their indie pop sound, Talk of the Town! is the it-band in their part of town, and spreading. After a successful U.S. tour the boys say there’s nothing they can’t accomplish. 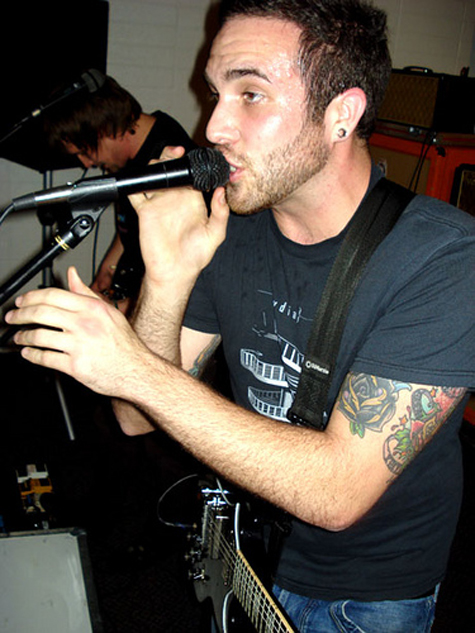