Who is That Masked Man? 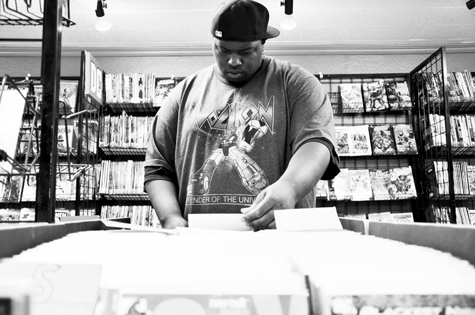 Superheroes assume secret identities that symbolize the life of the common man to protect themselves and the lives of those around them. The secret identity keeps the gifted rooted in reality. Following superhero archetypes, Task1ne is a rapper who protects his passion for music by doing accounting work for the state under the name Corey Lake Pruitt.

Pruitt takes the light rail to work and sits in the back. At the state office, he processes documents while quietly rapping to himself, which draws ire from his hard-nosed boss. He’s well known at the comic stores and strictly wears comic book T-shirts. At home, he has two cats that are disinterested in him unless it’s feeding time. He enjoys comics (a lot) and reviewing films. “I’ve seen Captain America 12 times,” he said. “It’s as good as a Captain America movie could have been. Is it the best comic book movie? Hell no. But, they captured Captain America, unlike Green Lantern, which was the worst piece of shit I’ve ever seen in my life.”

But, when the clubs open and the mics are plugged in, he transforms into Task1ne, a loud-mouthed, nerdcore rapper that speaks street Wookie and reps a crew called Skynet. He’s also poised to join the elite local ranks. “I’m extremely slept on,” he said. “I feel like I’m the underdog of Sacramento because I started out when everyone was already established.”

Like most superheroes, he had to polish his special powers in order to shed his colt legs. Remember Spider-Man’s first attempts with his webbing? Bad things happen to heroes not quite accustomed to their powers. Bad things like getting humiliated in a rap battle against Mahtie Bush. “I completely lost my lyrics,” Task1ne said. “It was three years ago, but to this day people call me ‘the guy that lost to Mahtie.’ It’s like what do I have to do to get people off of that?”

Determined to never lose a rhyme again, Task1ne took to mastering the art of freestyling. He freestyled at work. He kept instrumental CDs in his car to rhyme over. If a mic was offered at an onstage cipher, he seized it, until his skills off-the-dome became notorious.

“I stepped my freestyle game up,” he said. “I’m a geek, so my brain is going different places. I try to rhyme crazy things, like one time I rhymed about Pirates of Dark Water, the old cartoon. Or I said, ‘I swing from tree tops like I’m an Ewok.’ It’s in my brain. That’s what I do.”

But freestyles and a mixtape compiling a year’s worth of guest verses titled Task1ne Verses the World were not enough to earn him the Sammie nomination he sought, or a shot at a Submerge cover for that matter. Task1ne had to prove he could join the ranks of Random Abiladeze, C-Plus and Lostribe by dropping an album in 2011. “I did a lot of work last year,” he said. “I went from being in a group to being solo. I changed my style up a little bit and people started really liking it. So I started getting thrown on other people’s songs [including DLRN’s “Trill Cosby” with C-Plus]. Didn’t get nominated. That kind of hit me.”

Task1ne began working on District 916 a year and a half ago at Sound Cap Audio. He took a neutral stance for his solo record in order to work with whoever would send a beat his way. The only criteria was the producers had to be from Sacramento, which earned Task1ne beats from Lee Bannon, Adam Bomb, Nicatyne, Rufio and Jon Reyes, among others. “The whole album I wanted it to represent Sacramento,” he said. “One of my favorite movies is District 9. I feel like we as hip-hop here in Sac are kind of like that. In the movie the aliens are trapped there, and they feel like they have no way out. I kind of feel that way. But at the end one of them finally escapes out. I’m trying to be the one that escapes out.”

Task1ne has unbridled pride for the local scene, which filters into his philosophy on collaboration. He’s dieting, but his natural presence offers a well-sized frame to put the city on his shoulders. District 916 is a melting pot of crews that included working with Nicatyne and Yae of Fly High in Natomas. “Nobody really messes with them,” he said. “They do their own thing. There are a couple of groups they work with, but for the most part no one really does stuff with them. I wanted to. Got a beat from Nicatyne, which became the track ‘Villian’ featuring Yae–another Fly High member. Yae hit me up about doing a song about us being super villains. I said, ‘Here’s the beat. Start!’ That’s probably my favorite song on the album.”

The album is a balance of nerdcore references prepped for the battle circuit and everyman storytelling. The track “Bounce” breaks down the true story of Task1ne’s first groupie experience, in which he reacts like any normal dude with a state job and raps on the side might–mistake fleeting groupie love for the real thing. “I jumped to all these conclusions, thinking about a relationship, but she’s trying to leave. And I was just left like ‘Where are you going?’ So I tell my boys about it and they were like yeah, those are groupies.”

His daily routine of riding light rail inspired him to write “Back of the Bus,” a song pondering why young black men still sit in the back of the bus despite the privileges Rosa Parks made possible. “We’re a new generation. We can’t really relate to that. There’s no real answer to why I sit in the back. It’s just an automatic thing that I do.”

On “Introducing the Greatest,” Task1ne ponders what it takes to get a Sammie. And while the answer is power-bombing social networks with self-promotion, he needn’t wonder any longer–his name was included in the Best Emcee list of 2011. “I got it this year, thank God,” he said.

Implementing a no-days-off policy, he is planning his next project to be a free EP produced entirely by Adam Bomb, who produced three tracks on District 916. Task1ne maintains his secret identity beyond the common traits of superheroes. He holds his state job as a reminder to not give up his quest to be one of Sacramento’s greatest rappers. “I’m glad I work there because I see what I don’t want.”

In District 9 the alien that escapes takes the spaceship with the intentions of returning to those left behind and bettering their situation. Task1ne intends to do the same with a fall tour along the West Coast. In October he’ll play shows in Portland, Seattle, San Diego and Los Angeles. “I’m actually scared; I’m not going to lie,” he said. “Most rappers act cool about it, but naw, I’ve never done this before. I’ve never been to Seattle or Portland. A lot of people feel like it’s hard to find a way out, even though there are ways out. A lot of people feel trapped here and can’t branch out.

“I want to go up there and establish the Sacramento name, so the next time I come I can bring people with me. Like in the movie, the guy left and he’s going to come back to get his people.” 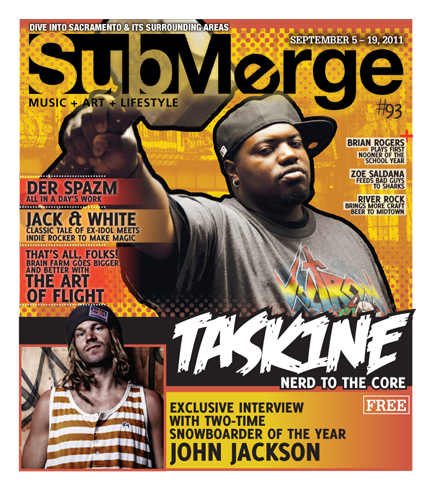 The District 916 CD release party will take place at The Blue Lamp in Sacramento on Sept. 15. Performing will be Digital Martyrs, JRas of SouLifted, Dregs1, Sleeprockers and of course Task1ne. For up to the minute info, follow Task1ne on Twitter @TASK1ne.