TAUK Tell an Epic Story Without Saying a Word 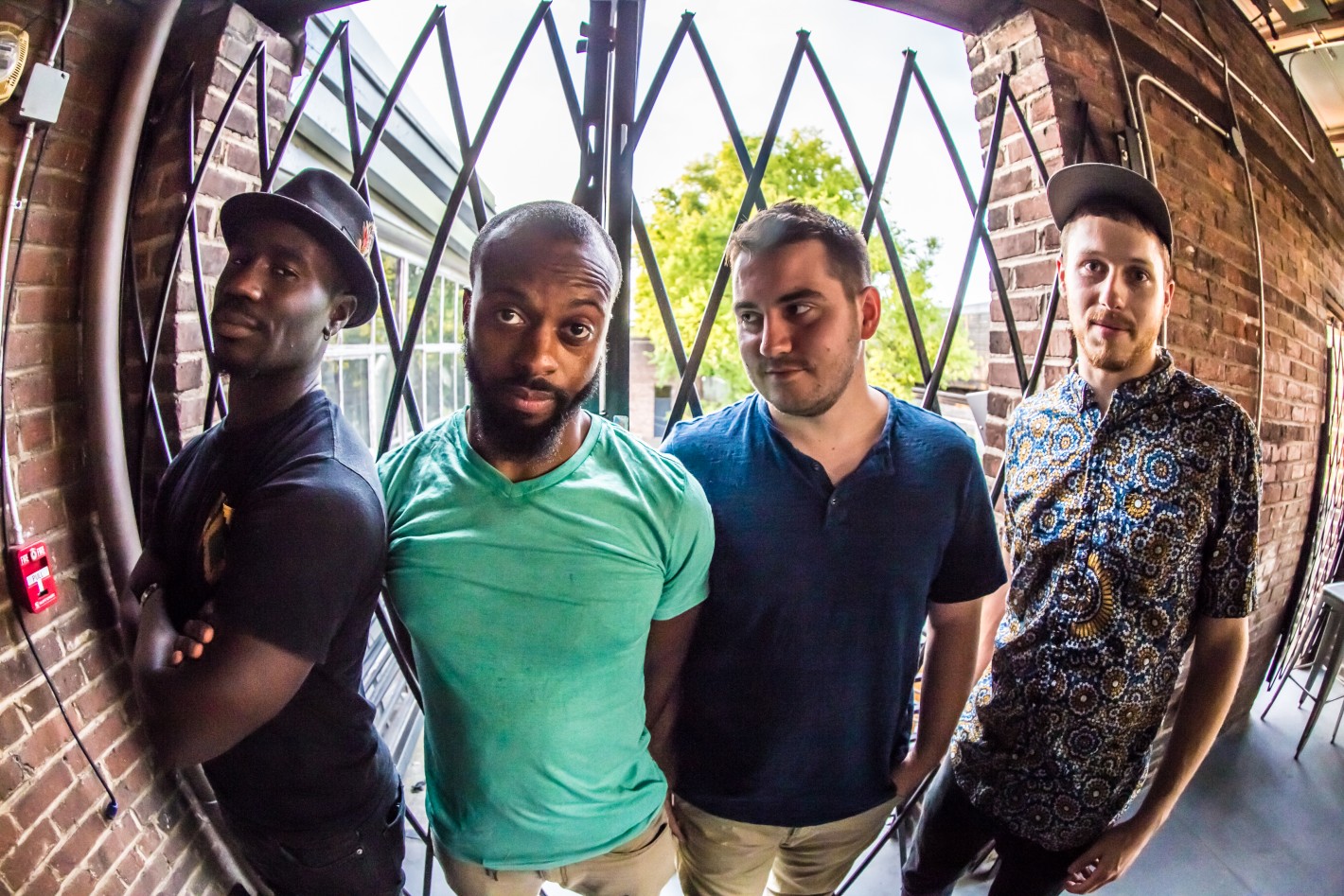 Some believe that having a strong message and storytelling through music is crucial. However, sometimes the language of music is spoken without saying a single word. Consisting of Matt Jalbert (guitar), Charlie Dolan (bass), Alric “A.C” Carter (keyboards) and Isaac Teel (drums), it’s quite certain that Oyster Bay, New York’s TAUK possess a keen grasp of creating a vivid sonic landscape without a need of vocals.

Upon listening to TAUK’s four albums—recorded in as many years—it’s apparent that several different genres of music have contributed to the building of the group’s unique sound. Jazz, classic rock, ambient and controlled funk music weave in and out of the landscape on songs such as “On Guard” and “Mindshift” from 2014’s Collisions.

TAUK’s latest release, Headroom, is a showcase of live material recorded at select venues on their 2014 and 2015 U.S. tour. This record demonstrates TAUK’s ability to take listeners on a swirling journey ranging from relaxing meditations to wall of sound outbursts. Many musical paths are chosen, even within a single track.

The group has grown their fan base in the last several years, in part due to their relentless tour schedule, having played alongside of Umphrey’s McGee, Widespread Panic and STS9 just to name a few. It’s also worth noting that the band’s two most recent records, Collisions and Headroom, were produced and/or mixed by Robert Carranza, who has worked with well-known acts like Ozomatli, The Mars Volta and Jack Johnson.

Submerge sat down with guitarist Matt Jalbert to discuss musical styles that have influenced the group’s sound, studio work versus live shows, the significance of undying fan support and much more. 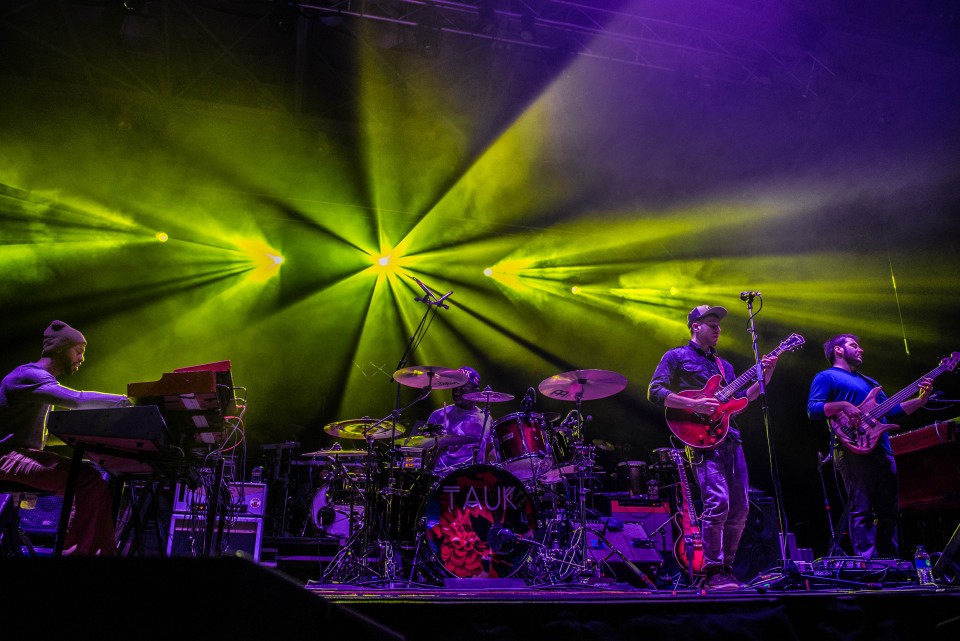 Is there any significance to the name TAUK?
There are a couple different angles to this. Three of us are from New York by way of Long Island and the eastern end is called Montauk. We shortened that a bit and came up with TAUK. We did research and found this lady who talks to dead people who goes by The Art of Universal Knowing, so we felt intrigued enough to name our band after the Montauk area.

Where did the term “cerebral funk” come from and do you feel that’s an accurate term to describe your music?
It’s tricky for us to classify or slot our sound since our songs range stylistically and we jump around between time signatures, but we are definitely a groove-based band inspired in part by funk music.

As you mentioned, your sound is tough to pinpoint and several styles are discernible from, song to song. Who would you say are some of your biggest influences?
When we write songs, we never try to emulate any particular artist, but all of our influences make their way into the fold. Classic rock acts like Jimi Hendrix and Led Zeppelin were a big influence growing up, but as time went on I developed a tasted for more electronic music like Aphex Twin or Radiohead. Lately I’ve been trying to dig into albums by Esperanza Spalding. Collectively, we try keeping open minds and ears out for new and different artists.

What do you see as being the challenges of playing in an instrumental band?
At first people would ask us about if we’d ever get a singer to join. After a few years of being acquainted with ourselves and knowing what we’re striving for, things that may be viewed as disadvantages turned into advantages. We would force ourselves to create powerful choruses or hooks instrumentally. We see it as a constant challenge of seeing which road we can go down to make music relatable to the crowd.

How are your songs generally structured and how has your chemistry evolved over the last few years?
Over time we’ve used new tools to shape our songs, whether it’s a groove, melody or chord structure. We are aware of these things in the context of our own catalog and strive to cover new ground with writing each new song by not falling into the same patterns we’ve done before. Sometimes we’ll come up with a memorable section but then depart from it completely or come back to it in a different way, to keep things fresh.

Do you find that audiences respond to certain themes differently in a live setting?
It varies from night to night. Sometimes it depends on where a song is placed in the set, the energy of the room or the effort we put out. Crowds pick up on cohesion with a band and if we’re doing our part and putting our best leg forward, we tend to get a great response, no matter the location. But different cities or towns have different vibes, which makes touring so fun and worthwhile. The best things we can do as a band is strive for that magical feeling that can only be found at a live show.

After releasing three studio albums, what were the reasons behind making a live record?
A lot of time and effort was put into making the albums, but we tour a lot and feature raw and improvisational moments live, which can’t be captured as well in the studio. We consider ourselves a live band and wanted to paint the most accurate picture of what it’s like to experience a TAUK show on record.

How did your relationship with producer Robert Carranza come about?
Robert took us under his wing years ago when we were sending old recordings out. He seems like a member of the band at this point; we trust him and always receive an honest opinion. He produced our last studio album Collisions and mixed our live album Headroom but also has an impressive resume with having produced artists ranging from Jack Johnson to The Mars Volta.

Whose idea was it to cover “In Bloom” by Nirvana and present it on Headroom? Do you ever catch the audience singing along when you play that live?
Everyone in the band loves that song and during rehearsal we realized it had a similar groove to a song called “Never Remember” by Kneebody. Live, we’ll play “In Bloom” and then go into “Never Remember” and then morph back. The audience loves to sing along with the chorus to “In Bloom,” so seems like a no brainer to keep playing it.

Who are the STAUKERS?
The STAUKERS are our most diehard fans that help us with promoting shows, buying our albums and get the word out about our band through social media. These are also some of the devotees we see several nights in a row following us around on the road. There’s no bigger compliment than receiving praise at the end of a show from a fan. It’s very uplifting and helps keep us going.

What is the best advice you’ve ever received in the business?
To go out there every night and do what you love by believing in yourself. You can’t worry about what other people think. You have to stick to your gut and don’t bend to other people’s expectations. You’ve got to do what works for you.

TAUK come through Sacramento March 23, 2016 at Harlow’s with locals Ideateam opening the show. Doors at 7 p.m. Tickets are $10 in advance. On March 24 TAUK opens up for Umphrey’s McGee at Harrah’s Lake Tahoe as part of their South Shore Room Concert Series. Tickets are $27.50 in advance, 7 p.m. doors.