TBD Fest is More Than Music

TBD Fest 2015 will pop up in the Bridge District from Friday, Sept. 18 through Sunday, Sept. 20, 2015. The festival’s impressive three-day music lineup will be paired with local food, beer and wine vendors, handmade good vendors, amusement park rides and a number of noteworthy art exhibits and installations.

Although participating artists this year will hail from around the globe, much of the art to be on display was made in Sacramento. Shaun Burner, who is curating and building out a structure for live mural painting for about 12 artists at TBD, has hometown pride. “Sacramento is growing in all forms,” says Burner. “I’m excited to observe its growth as well as help push it forward.”

Says TBD art manager Seumas Raibéart Coutts, Ph.D., “There are some surprises in store … some rather giant installations. Some world-class contemporary dance and performance artists … Art is an education, a form of knowledge, of living.”

Here are three artists to keep a look out for at this years TBD. 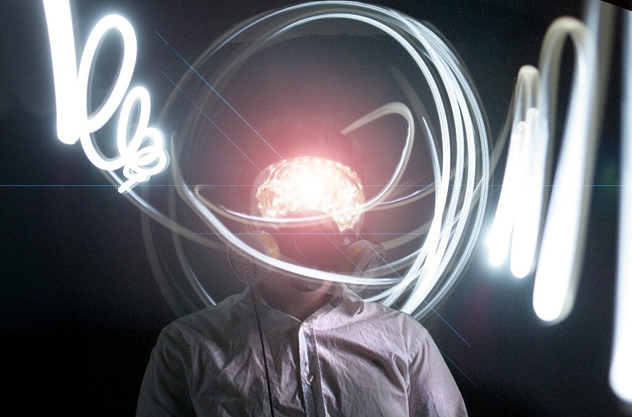 Unassuming in a white T-shirt, dirty black jeans and a nondescript brown haircut, 28-year-old Matt Brown is kind of a big deal in Sacramento’s thriving artscape. Or, anyway, he’s getting a lot of work. Committed to art life, Brown foregoes many creature comforts in order to create rather than punch a clock—to a point where he’s been known to live in his van, outfitted with a rooftop projector.

Attendees of last year’s TBD Fest will unanimously recall his iconic laser cube art installation. This year, TBD dubbed Brown Artist-in-Residence, and he plans to up the ante by incorporating his newfound knowledge of robotics into his contributions to the festival atmosphere. Among the captivated crowds and surging excitement, Matt Brown will be low-key exhibiting his strange brand of art that combines absurdity, beauty and a healthy dose of his enjoyment of fucking with people. 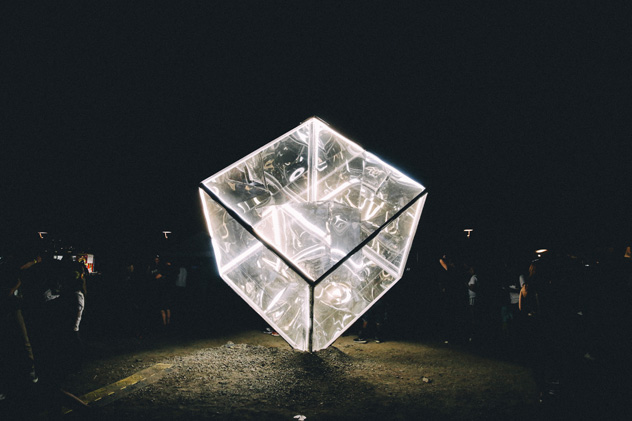 In regards to the cube, Brown recounts, “Holy fuck. I think I met with Clay, and we were talking about projection stuff, and he was like, ‘I need something iconic. I want to project on the lily pads on the river,’ and I was like, ‘That doesn’t really make sense, I don’t even know how to do that. And then I thought it would be so cool if there was this giant laser cube!”

With the help of Matt Byrd, the cube was created. “I had no idea people were going to like it so much,” Brown smiles. But the smile fades as he remembers, “Somebody would draw a dick on it constantly, just one after another, and I don’t know why.”

For the upcoming TBD Fest, Brown has a couple of projects underway. “I am doing a robot that will move around and talk to people. I’ll be remotely controlling it in the distance and I’ll be talking to people through it. It will have a fog that it will emit if people get too crazy,” says Brown mischievously. Welded metal, dryer pieces and car stereos are among the fodder being employed in the creation of this marauding cyborg. 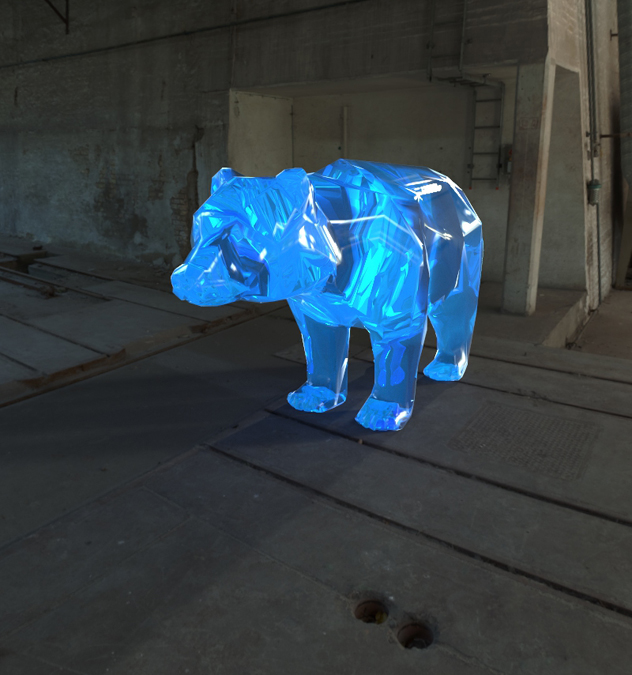 And then there’s the Ice Bear. “It’s going to be giving people motivational help and philosophical speeches, and it will be playing This Mortal Coil. There will be a fog machine near it creating a haze, and I’m thinking about having a laser shoot out of its mouth every once in awhile. It will be wearing gold jewelry, like bling, you know?”

Of the music lined up for this year, Brown says, “I am the most excited to see Death Grips. I’m also super stoked to see Tears for Fears; they got me through a really hard time.”

Brown has been making art for over a decade, and has been commissioned to create a body of work—from sculpture to paintings, films and video projections—for high-profile organizations like TEDx, Blackbird Kitchen + Beer Gallery, the Sizzling Sirens burlesque troupe, Sacramento Electronic Music Festival and more. Throw a rock in any direction in Downtown Sacramento, and you’ll likely hit one of his murals (often not commissioned). “A lot of my art is temporary, just happening in real life,” explains Brown.

Brown was also literally an artist-in-residence at Exhibit S, a 12,000 square-foot art space that garnered squatting rights at Downtown Plaza in 2013 and housed other artists such as Danny Scheible (known for his Tapigami art) and Maren Conrad.

“I was moving out of my house at the time, so I was totally sleeping at the mall,” says Brown of his Exhibit S tenure. “I would shower in Assembly when it was open. It was really hard for me being in a public space trying to make art, so I had to wear a mouse mask.”

Currently residing at the Warehouse Artist Lofts on R Street, Brown is ready to go back to living in a van down by the river. “I prefer just living in a car, and I think I’m going to move to Auburn where there’s nobody around for miles. It’s very insular.”

But R Street hasn’t seen the last of Matt Brown. He’ll have an indirect hand in the R Street Block Party on Oct. 3, along with a host of other Sacramento artists, musicians, businesses and vendors.

The basement at WAL, which is a rehearsal and jam space, will be open during the R Street Block Party. “There will be a Jacob’s Ladder and some robotics, and Shaun Burner and Franceska Gamez are painting the walls,” describes Brown. “I want it to look nothing like the rest of the building at all, for people to go down there and feel like they’re going into a totally different world.”

In a totally different world, where all that matters is art and wonder—that’s where Matt Brown resides, regardless of the roof or lack thereof over his head. 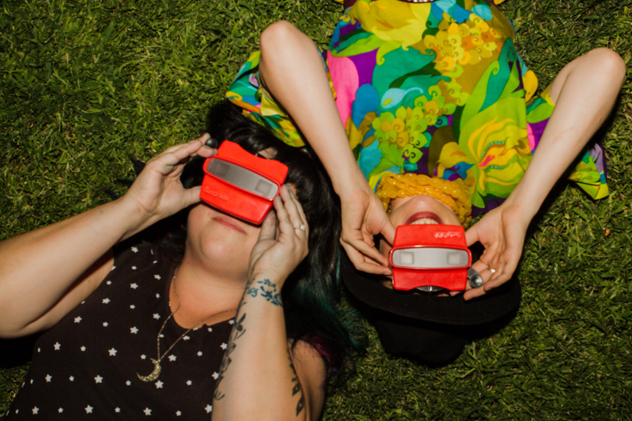 DO YOU SEE WHAT I SEE?

Arielle Robbins and Laura Marie Anthony seek to challenge the way people think about what it is to be social and beautiful at TBD Fest by way of their ViewMaster Interactive Art Installation, which will be a series of red retro slide viewers placed on tripods throughout the festival space.

“We hope the installation will make people think about how beauty is a vast and flexible thing, changing from person to person and group to group, but even among perceptual differences, core similarities in how we all experience beauty underscore that we connect with it in remarkably similar ways,” the duo explains.

Anthony’s artistic background is in visual art, while Robbins’ is in writing, concept art and music. Both recently founded an artist collective called Retrograde Collective. In the coming year, they will premiere two important projects—a short film, Sutro Ruins, and a periodical, Venus in Furs. 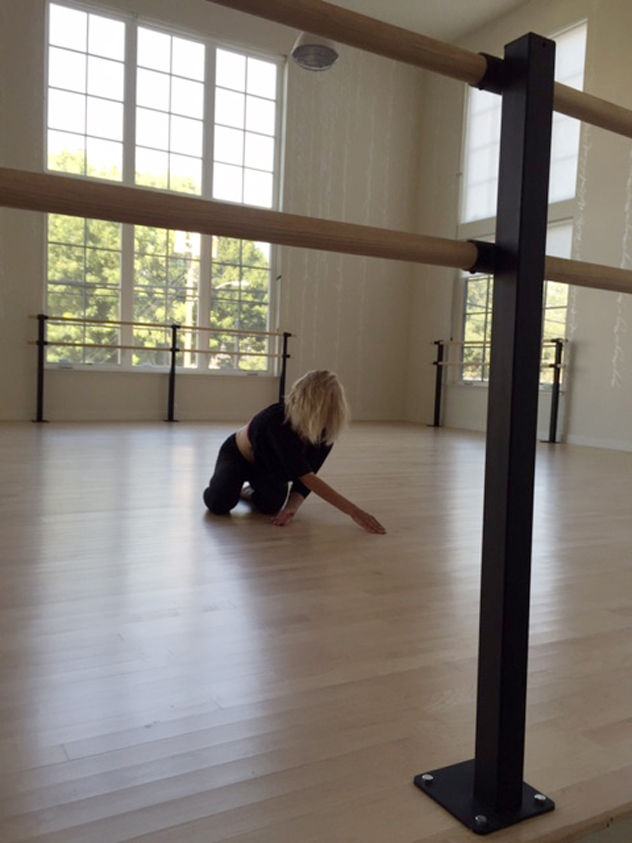 Having performed over the past five years in museums and galleries throughout Europe, Amanda Prince-Lubawy will showcase how movement can be art at TBD.

“My piece for TBD Fest is called rolling on the riverfront,” describes Prince-Lubawy. “The choreography proposes repetitious, durational movement that requires the body to endure time and mimic the ebb and flow of the Sacramento river.”

Lubawy’s three-hour performances will commence at 7 p.m. each night of the festival.

“I am a dance artist,” explains Lubawy.

“I am interested in the body and conversations that directly approach the body as a movement medium. I like to explore dance in a minimal sense— everyday movements, not overtly stylized. I want Sacramento to view dance as more of an experience rather than entertainment.”