Beauty and the Beast

For the last 15 years Cameron Others and 7evin have been working on their material, laying out beats, loops, archaic recordings of bedroom beatbox compilations and reworking that material into new orchestrations. In the last two years it’s all come together, and now, as Tel Cairo, Cameron and 7evin are set to release their debut full length, Voice of Reason. The album itself has been part of the long process of self-discovery for these two electronic musicians. Their sound, their relationship to composition, their knowledge of technique and technology have increased with each singular endeavor, and the result is a precision track listing of rattling low-end bass and twinkling high-end melodies.

And I’ve yet to mention what, for me, is the most impressive part of the album: its list of local MCs and vocalists who dominate the lyric and lead portions on the majority of the project. It’s a list of past, present and future Sacramento stars, artists whom have been working the scene for the last two decades trying to lift the city up with their own talents and careers. There are individual appearances from Aurora Love, “This Is Not”; Agustus thElephant, “Music Box”; and Mic Jordan, “Electro Knock.” On “Twelve Paths Toward Movement,” Sister Crayon frontwoman, Terra Lopez appears alongside hip-hop local TAIS; Mahtie Bush spits verse after verse on the track “Illicit” and the unknown, yet powerful, Stephanie Barber holds down the hook. Lest we find ourselves stuck in the lady sings the hook cliché, Paper Pistols new lead, Juliana Lydell sings the verses to the high pitched chorus of Caleb Heinze, from Ape Machine and Confederate Whiskey; and Task1ne, Voltron reference and all, flows over the verses of “Evening Push,” before local legend Jonah Matranga gives his signature falsetto to the hook. It’s a list that’s both diverse and impressive, and it makes for an album that highlights the many dynamic qualities of music in Sacramento.

Breaking from some highly competitive Wii, 7evin and Cameron sat down with Submerge, and we talked about Sacramento, influences, genre, processes of songwriting and recording, skateboarding, musicianship, Ira Skinner’s beard and the talented slew of lyricists they worked with on the album. In addition, Submerge exchanged a few emails with the lyricists, and, likewise, we share their thoughts on working with Tel Cairo.

What brought you to Sacramento? What are the best and worst parts about this city?
7evin: I moved here about eight years ago to work with Ira Skinner, a good longtime friend. Sacramento has an amazing group of musically talented individuals. We like what’s going on here. The cost of living is amazing; you don’t have to feel so pressured. The bad part is that there is almost no monetary value for art here.

Can you describe your songwriting process?
7evin: A lot of times we start off with analog, a guitar, drumset, bass. We get in there and start doing electronics. We don’t do samples. We do our own tones and MIDI controlling. There’s always one part, and we shoot it to the next person until he can’t work on it anymore, and he shoots it back. We’ll meet once a week and we’ll work on that song. We made 32 tracks for this album and 11 made the cut.

What sort of influence did Ira Skinner have, working with him as a producer?
Cameron: Ira let us figure out who we were. He took all the things we’d been layering for so long, and we’d forgotten what we started out with, and made them sound amazing. Some of these things were already done. We’d put so much into it. We needed to step away a little bit.
7evin: He is so chill in the studio. He let us fumble around to find a niche, and the second he hears something that’s good, he’s like “Wait, go back! Let’s do that.” We have the first word, bounce it off to someone in collaboration; we get the second word, and Ira comes in; and we get the final word.
Cameron: In between there was also a lot of growth and learning on our side, with the programs.

Of the two of you, who’s the biggest perfectionist?
7evin: We’re never happy with it.
Art is never done. We just move onto another song.
Cameron: We look at things a little differently. I’ll hear things differently that he might not hear. Technically, I think he’s the perfectionist, making sure everything is lined up. I’ve tried to watch, and I’ll fall asleep for a little bit.
7evin: We tag team it, recording. I’m 20 percent deaf in my left ear. I don’t hear high end, I hear mid-tone and bass. You can see that and feel that live. [Cameron will] come in and stick this melody here. He brings the beauty to my dirtiness. I’m a gutter-punk; this guy comes in, and he’s playing 12-string guitar. We’re very similar but we’re like the Alice in Wonderland, Looking Glass Mirror versions of each other.
Cameron: We get inspired at the same time from different things. We get a feeling. It could be DJ Shadow, it could be anything, a country song; our creative juices start, and we just sit down and see what comes out. When we work together we balance each other’s ideas.

I know that every collaborator brings a different set of skills to the studio, the songwriting process. Who impressed you most while recording?
7evin: Mic Jordan is one of the smartest people in the world. He’s brilliant. Just kicking it, he’d expand our minds in so many ways. When he came in, we worked an experimental song; it’s not a typical hip-hop track. He rose to the occasion.
He has like four different cadences, and it’s beautiful.
Cameron: Jordan, for sure. Caleb [Heinze], I’ve known that dude for a long time, and I knew he could sing. The way he nails that chorus is genius.
7evin: He has a range that no male should have. We weren’t sure what to do with that track “Nirvana,” but Juliana [Lydell] approached it off of his vocal, like the ghost of the guy she lost her virginity to.

What was it like to work with Jonah and everyone else? How’d you get them to collaborate on the album?
7evin: They were all our friends, except for Jonah, though Jonah’s now friends and family. Jonah’s someone we looked up to, someone we’d seen as kids growing up, going to shows at the Cattle Club. We had mutual friends so I hit him up.
Cam sent over “Evening Push” and he just ran with it. He was so kind and gentle of a person to work with two guys he didn’t know. We sent a lot of emails backwards and forwards. We haven’t got a chance to do it live with him as far as performance. But we’re doing that on April 4, everyone on the album is performing. It’s never going to happen again. It’s like one shot.
We definitely took a Gorillaz approach with this. Terra [Lopez and Cameron] are damn near best friends. I knew Stephanie [Barber] from helping her and her sister with their restaurant, and that girl can sing. We locked her and [Mahtie] Bush in my bedroom with us, and it was like a Seven Minutes in Heaven kind of thing, writing a song on an SM58 microphone.
Stephanie Barber [who is quietly present during most of the interview]: It was really creepy and productive.

One of the ways I’d describe your sound is electric, post-grunge, skateboard culture, all grown up. You happy with that?
Cameron: I’m cool with that. That’s what I do every day, [skate]. Skate videos have helped me listen to different things. In old Toy Machine videos, Ed Templeton uses a lot of Sonic Youth. I watched them hundreds of times. It made me want to experiment with my own guitar.

Would you say your music belongs as the soundtrack to the cinematic build up of a riot or the post-riot moment of optimistic melancholia, where a new world briefly exists but won’t last over time?
7evin: Afterwards, definitely. After everything’s been destroyed, and we’re rebuilding. There’s healing process in these songs. There’s hope. Your heart gets demolished, but you can grow and
move on. 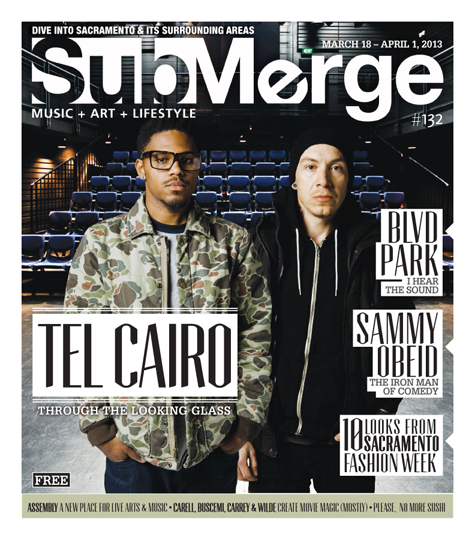 Tel Cairo will celebrate the release of Voice of Reason at Midtown BarFly, 1119 21st Street in Sacramento, on April 4, 2013. This will be perhaps your only chance to see 7evin and Cameron Others share the stage with all of the vocalists who appeared on the album. For more info on the show, go to https://www.facebook.com/telcairo, or hop over to Midtown BarFly’s Facebook page, https://www.facebook.com/MidtownBarFly. 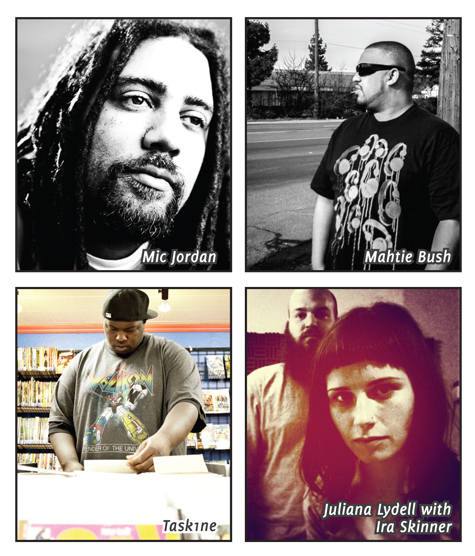 How was it to work with 7evin and Cameron on your track?
Mic Jordan: They played me a skeletal version of the song they wanted me on and set me loose with no real guidelines. I definitely had input into its final outcome, but I also felt like, “OK, everybody here knows what they’re doing, they trust me do my thing lyrically, so I trust them to do their thing sonically.”
Juliana Lydell: They’re really open-minded, supportive, and enthusiastic. Creating with them is a lot of fun.

Can you tell me about the process, e.g. did they have the song done and let you do vocals over it, or was it more of a collaborative process where you aided in the musical composition?
Task1ne: They trusted my expertise and let me just record the track like how I usually do it with no problems. It was a blast. I fell in love with the track instantly. I’m a fan of all types of music, so it was great to get to experiment on something different.
Mahtie Bush: They built the track right on the spot, and as they did that I was writing to the beat. It just happened; we were on the same page. The vibe was ill.

What makes Tel Cairo vital to the local scene?
Mic Jordan: The fact that they are bridging the (artificially separated) electronic, alternative and hip-hop communities. Ultimately, what sets Tel Cairo apart is the fact that their music defies easy categorization while somehow sounding authentic no matter what territory it’s venturing into.
Juliana Lydell: How excited they are, how much they believe in community, and what a team effort they make out of the act of creation. They think big. It’s contagious.

How long until Tel Cairo achieves world domination?
Mic Jordan: Who’s to say they haven’t already?
Task1ne: A better question is, which one is Pinky and which one is the Brain? Inquiring minds would like to know.