Natalie Ribbons discusses her new band Tele Novella, some of the more unfortunate aspects of the music industry and even wrangles us a critter

Hey, so you remember Sacramento’s Natalie Gordon (aka Natalie Ribbons)? Beautiful lady with bright red hair? Sang and played guitar with Agent Ribbons? Well, she moved to Texas and she’s in a brand new band called Tele Novella with a couple members of Voxtrot. And I think her hair’s brown now. Anyway, the band—Gordon (guitar/vocals); Jason Chronis (bass/vocals); Sarah La Puerta (keyboards) and Matt Simon (drums)—plays some really interesting, sophisticated and moody pop music that’s sort of like Peggy Lee with a bit of British Invasion or something. Their music reminds me of Mad Men if the entire advertising agency was on acid and New York City was haunted by slutty, curious and ultimately friendly ghosts. Their new EP Cosmic Dial Tone combines Gordon’s raspy “man voice” (her words) with some really intimate and, at times, creepy-ish rhythms. Songs like “Don’t Be a Stranger,” are characterized by unbreakable melodies, fuzzy bass and lyrics that taunt the listener into feeling a bunch of tingly feelings (“When I’m low/ I try to say “hello”/ to people on/ the street that I don’t know/ It’s difficult when there’s so many faces to remember/ But if the world is going to end/ please, don’t be a stranger.”). Tele Novella transports the listener to a time reminiscent of the past, but doesn’t actually exist yet. And, more importantly, they make music that manages to get under the listener’s skin and stay there for quite some time. So, in preparation for their upcoming West Coast Tour, Gordon answered a few questions for Submerge. Spoiler alert: She says “fuck” a lot. And halfway through the interview (in one of the most Texas moments to ever grace the pages of this humble magazine), she catches a lizard with her bare hands.

So is there any difference between Austin and Sacramento?
Nope. It’s exactly the same.

Good, that’s what I thought.
No, I was really reticent to leave Sacramento and it bums me out in a lot of ways, but for me, personally, what I was trying to accomplish, it was definitely the best thing I ever did.

In terms of music?
Yeah, I really thought I was doing a lot more than I actually was when I was there and then I moved here and got completely beaten down by the realities of life and realized I had to start working a lot harder. So I feel like I’m working 10-times harder with Tele Novella than I was with Agent Ribbons.

What do you mean “beaten down?”
There’s just so much competition and nobody gives a shit. Success has absolutely nothing to do with—well, I guess it has something to do with ability and quality of songwriting and stuff to some limited extent, but it’s really, completely just like who you know and how much money you have to put in to promoting what you’re doing.

So it’s like everything else?
Exactly. It’s just like politics or whatever. I don’t know. I feel like I’m learning to be a smarter businessperson, even though that kind of grosses me out. It really is a lot like politics in some fucked up way. My step-dad just ran for County Supervisor in Sacramento and he’s been running for different offices in Sacramento since 1996 and he finally won. Just seeing all the stupid games he has to play and pandering to people that will fund his campaign it sadly reminds me of the music industry.

And writing, too. It’s the same shit. So your step-dad’s a supervisor now?
Yeah.

I should really keep up with that stuff.
A lizard!

What?
I just caught a lizard. It’s a little anole.

That was such a Texas moment right there. I’m glad that happened.
The lizards here are slower here than in California.

Are they fat because they’re Texans?
No, no. They’re just not as sprightly. I remember trying to catch lizards all the time in Napa Valley and stuff when I was there visiting and there was just no way in hell, but here I catch lizards all the time. Toads, too. There’s big fat toads all over the place. And every type of bug that you can ever imagine is constantly in your house no matter what you do.

That sounds horrible. Like spiders?
Spiders, a huge array of different types of cockroaches that I didn’t even know existed. Huge ants. The ants are gigantic here. And they bite you.

Is that because you’re poor or does everyone experience the bugs like that?
Poor people get bitten by ants more often than rich people. That’s a fact.

I’ve seen you guys in Spin and in other publications. Is it exciting to see your stuff being broadcasted outside of your little circles?
Yeah, it’s exciting. I don’t think that’s really happening all that much right now. The publicity is not very palpable. Where it really helps is getting better shows where people will see us. It’s the booking agents that are impressed by Spin and USA Today and shit like that. They see that and they take us seriously and they give us a guarantee instead of saying, “Fuck you,” and we actually play with bands that are not shitty. And we make fans.

Tele Novella is more technically sound and complex than Agent Ribbons. You think so?
I would agree. I think it’s a lot more thought out, whereas things were a little bit more random and thrown together than with my old band. But there’s—for at least the time being—a lot less raw energy in it. And I think it’s because when I suddenly had the opportunity to work with all these people that were far more proficient at their instruments than I was, I got more serious. And I think that after this tour I’m going to write some material that feels a little bit more fun to perform for me. But it’s been a really interesting experiment to put in these more little baroque parts and challenge myself a little bit more than I have been previously. 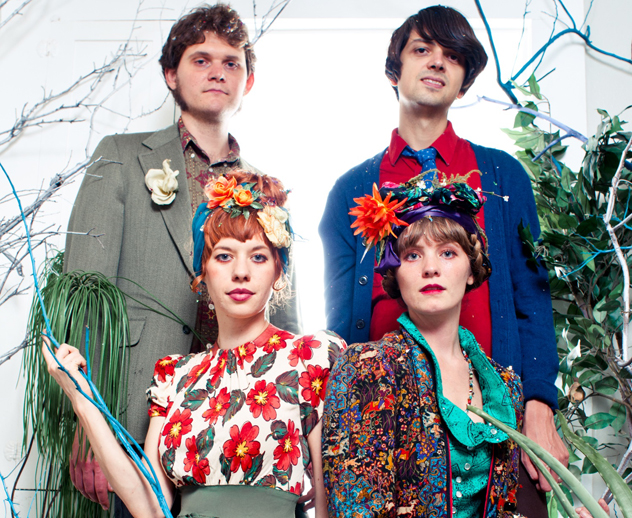 So are your shows different then?
Yeah, they’re a lot more stressful! People expect me to not fuck up, whereas I would fuck up all the time before and nobody really cared because they kind of expected me to fuck up. We were just really sloppy before, but it was kind of more fun that way. It’s still fun, but it’s just really stressful because everyone in my band is a serious musician and they’re really good at what they do, and I still don’t even know the name of any of the chords. And it freaks me out.

Did you ever hear the shitty things people said about Agent Ribbons?
That was seriously the worst. I was so sensitive then. Now I’m tougher than I used to be. But living [in Sacramento]—Jesus Christ. People were really venomous to us. There were so many people that hated me for no reason and said so many truly cruel things about both Lauren and I. It really fucked with my head and turned me into a really paranoid person. I didn’t trust people. You know how it is.

But I think you have a seriously rabid super fan who lives here. They’ll still email me and tell me to fuck off for not writing about you.
That’s so crazy. And really funny. I think there’s like two of them.

Yeah, they’re insane. They’ll email me shit like, “How dare you write about rap music when Natalie Ribbons exists?!”
That’s so humiliating. You know, there’s one guy that actually totally helps us. I didn’t think that anyone would ever listen to that guy, but he wrote to a really big blogger guy and the guy ended up liking us a lot and writing about us and we sold a lot of music and ended up getting a whole spread in Bust Magazine because of it. And it was just from him writing and complaining that they weren’t writing about us.

That’s probably the same guy. That’s cool, though. As long as he doesn’t stalk and kill you someday.
Exactly. That’s the other end of the sword, for sure.

So you guys are about to tour. What’s that going to be like?
I love it. I am really antsy to get out of here. This is going to be our best tour ever.

Give Natalie a warm hometown reception when she returns to Sacramento with Tele Novella to play Witch Room on Sept. 1, 2014. Also performing will be the aforementioned Shannon and the Clams as well as Silver Spoons and DJ Roger Carpio. The show starts at 9 p.m. and has an $8 cover. Check out Witchroomsac.com for more details. 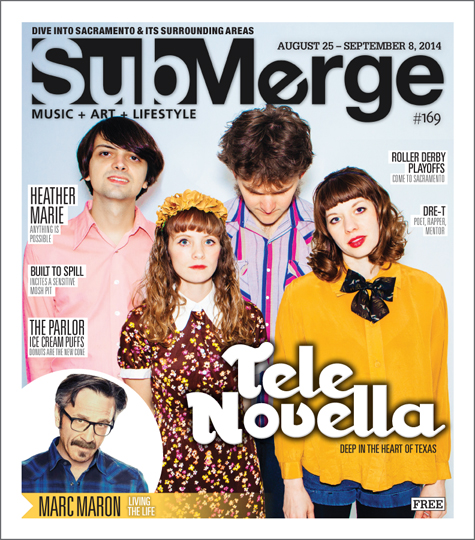