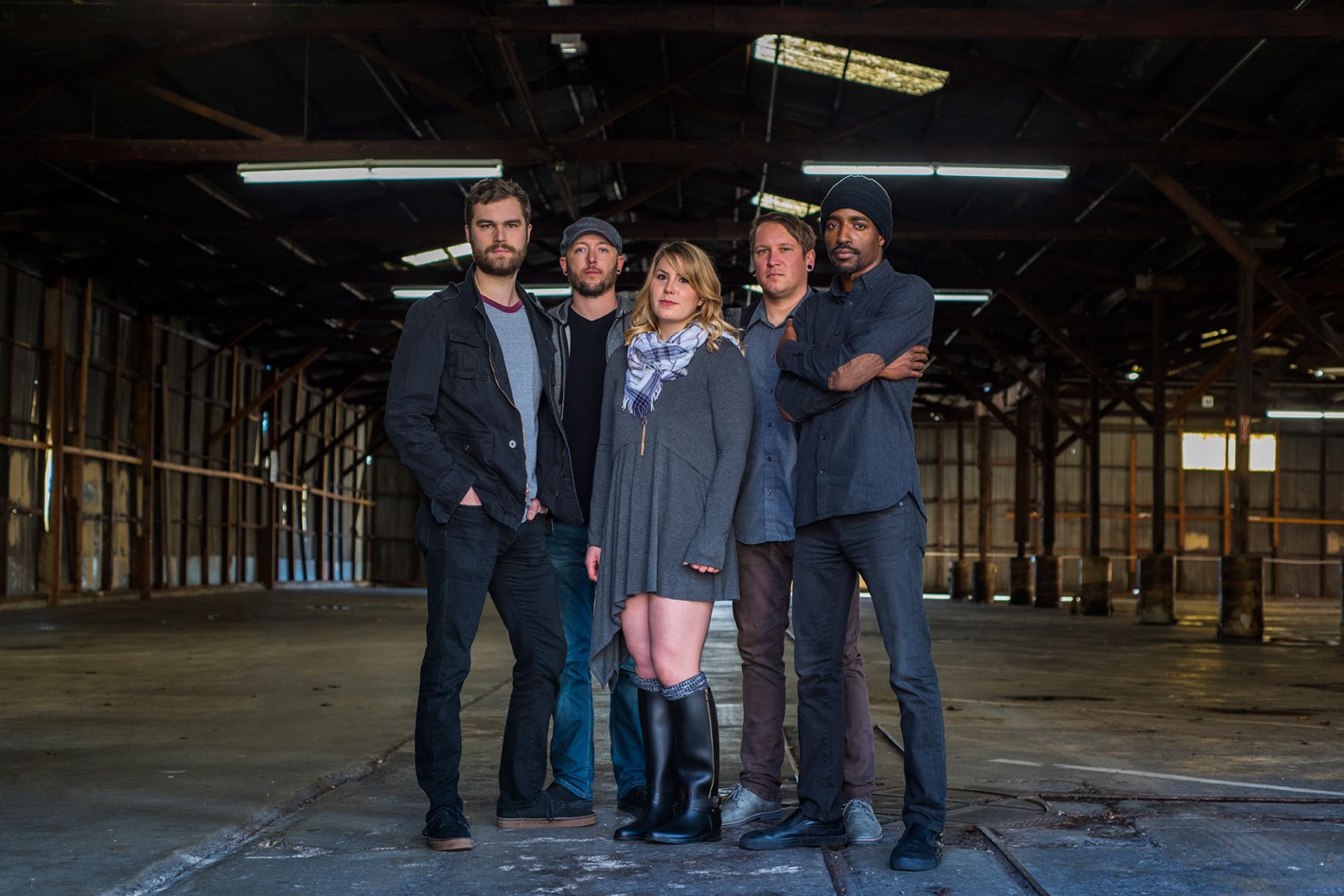 If I ever needed to hire a hype group, Tell the Wolves can take all my money. The Sacramento five-piece is as energetic and bright as a crackling fire in rock ‘n’ roll hell.

Offstage, the band is full of welcoming, positive and joyous dudes. Onstage, however, they turn awesomely erratic and sonically chaotic. I sat with vocalist/guitarist Leryan Burrey and bassist Zack Davis to talk about the release of their upcoming EP The Great Design, and how they manage to balance being the extremely optimistic, super nice guys making music that delivers a riveting middle finger.

Tell the Wolves has been together since 2013, and has only added members in their few years of being a band. The band’s name comes from multiple instances of wolves popping up in their lives. The main one being when Davis came across the book Tell the Wolves I’m Home (by Carol Rifka Brunt), and was struck by the ring of it. He went to his bandmates, who had been knocking around band names for quite some time, and presented them with his band-name epiphany, “Tell the Wolves.” Destiny was manifested that day, and the rest is history.

Burrey and Davis first met at Harlow’s, where coincidentally, they will have their first EP release show with their band. “The details are a little murky,” Burrey admits. “We had both had a bit to drink that night.”

At this point in the conversation, they both go back and forth in trying to piece together what happened that night, and how it led to their partnership. The conclusion was: “Essentially, it was a labor of love brought together in a drunken blur.”

Both guys have been long-time musicians in Sacramento, and attribute their accomplishments to local networking. “We wouldn’t have been able to accomplish anything. Not Concerts in the Park last year, not any of it,” Davis said. “The Sacramento music community is so supportive and they all like and share our stuff. It has all been a very supported ride.”

The first show the band ever played together was also at Harlow’s, where they played for pretty much just bartenders and girlfriends, “The place was completely dead,” Burrey reminisced. This time, for their EP release show at that same venue on Feb. 6, 2016 things are already turning out much better.

“We have already been selling some tickets, so we are stoked to have the support this time around,” Burrey said.

Zack added that, “Harlow’s and Old I are some of our favorite places to play. Last time we played at Old I, though, we were physically too big for the stage. It’s a bummer because it is our very favorite dive bar. It has such a super awesome atmosphere. And it has the scent of dive bar.”

Tell the Wolves has mastered the art of creating erratic rock ‘n’ roll with a soft spot. They like to emotionally vomit their heart out into song.

“I like bands that do weird things and are not afraid. I appreciate the fact that they take so many risks,” said Davis. “I like feel-good-for-you music that is creative and interesting, but still meaningful. My favorite bands, like Incubus, don’t just make art for art’s sake. They make art so that you feel something. On the other hand, I can honestly say that those guys can shit in a bucket and I would buy it.”

He continued,“You can think of your favorite musicians and pinpoint how their music makes you feel. That’s what it is all about. For example, Rage Against the Machine, who are one of my biggest influences, started out as a couple of young guys who sung about their frustrations with the system. Here we are 20 years later, and what they sang about sadly still matters and is relevant. They used their music as an honest platform, and they are absolutely timeless. Surrounding myself with music like this for years, has rubbed off on me and made want to create similar music experiences.”

Tell the Wolves says that their EP is a “Culmination of everything we have ever wanted to do. EVER.”

“We wanted to make some groundbreaking, beautiful, rock and roll,” said Burrey.

“We had already made all of this music, played all of these shows and had a bunch of fun making our music. This EP seemed to be the only thing missing, and it’s kind of being used to sum up the work that we have done in the past three years,” Davis continued.

“This EP took us a year and a half of fun, fighting, drinking, hangovers, deaths, crying, things we can’t even talk about,” Burrey said.

“And a couple of murders,” added Davis, “This is off the record, right?”

Davis’ overall experience with Tell the Wolves and his music can be summed up with a little help from Justin Timberlake. “We were so excited to write this music, and we are so excited to play it. We have such a good time goofing the fuck off,” he said. “It is so important for us not to take ourselves too seriously. Most of the time, our music is really emotional and serious, but when people see us live or get to know us, they will see that we aren’t like that. Music is our outlet for that. Justin Timberlake once said, ‘I don’t take myself too seriously, but I take what I do very seriously.’ We hope people hear how much we love to create music. I want them to feel our love and the passion that goes into it. The studio is our sanctuary, and it’s where we get to express all of those feelings that are all bundled up. We get to let loose with noise and share it with our audience. This is what music is all about for us.”

The whole album was recorded mostly every Sunday. Saturday night before recording would always turn into ridiculous nights of catastrophic drinking. “My girlfriend affectionately named the Den we would drink at ‘The Den of Bad Decisions.’ And so it was,” Burrey said. “All of the songs on the EP were created through the urgency to express ourselves through all of this craziness in our life. We would have these wild emotional journeys, like my issue with alcohol, that I was really able to deal with through making this EP.”

You can catch Davis and Burrey with the rest of the Tell the Wolves crew at Harlow’s Feb. 6, 2016 for the release of their very first EP, The Great Design. Also performing that night will be Some Fear None and Hero’s Last Mission. Doors open at 10 p.m. for a 10:30 show. Tickets can be purchased in advance through Harlows.com.