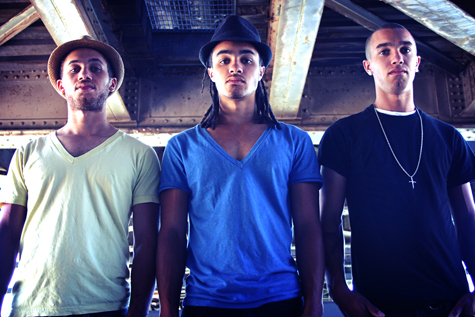 Local rock band The Bell Boys are made up of three brothers: Erik (guitar/drums/vocals), Elijah (drums/vocals/keys) and Jacob (bass/vocals) Bell. Get it? “It’s a functional, no gimmicks name,” their bio says, and indeed it is. The Bell Boys’ new release, The Jean Hagen EP, is set to drop on Wednesday, Nov. 23, 2011 at Luigi’s Fundgarden (1050 20th Street). These dudes are obviously all about family; not only are they three talented brothers in a band together, they even named their new EP after their mom. “Jean is my mom’s middle name and Hagen is her maiden name,” Elijah recently told Submerge. Their mother, Donna Bell, even gets credit for the EP’s album art. Elijah mentioned that it was a piece she created a long time ago, back in 1978, he thought, but that she just recently found in an attic. “It was a trip. She created that a long time ago, and it just worked,” he said. For the recording process of The Jean Hagen EP, the brothers enlisted the help of Lucas Thompson as well as Art Padilla (of local band Hero’s Last Mission), who engineered, mixed and produced the record. The song “Black Shoes White Cars” can be streamed at Facebook.com/bellboysmusic. The EP release show will also feature openers James Cavern and Hero’s Last Mission. All ages are welcome, doors open at 8 p.m. and the show is just $5