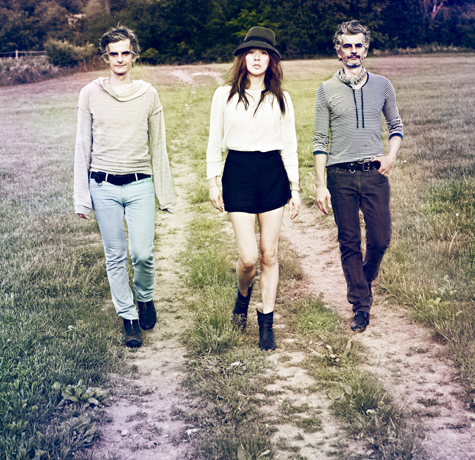 Some bands preach an ethos of doing something different on every album, and other bands actually follow thought. Blonde Redhead is certainly the latter. Following the group from the angular, grimy post-punk of its early years in the mid-‘90s to the dream pop that garnered the group its growing notoriety, it’s difficult to believe all this music–a catalog now eight albums deep–came from the same three individuals. For their latest release, Penny Sparkle, Blonde Redhead, comprised of twin brothers Simone and Amedeo Pace and vocalist Kazu Makino (Amedeo’s wife), reinvents itself again with 10 mood-altering, electronic-drenched tracks.

Doing something new may be its own reward, but it doesn’t always translate well with critics and fans. Metacritic.com, a site that summarizes reviews of movies, music and video games, rates Penny Sparkle, released Sept. 14, 2010 at just 68 out of 100 percent, whereas the band’s past three records notched well over 70 percent (their previous record, 2007’s 23, also Blonde Redhead’s biggest commercial success, raked in 83 percent). Metacritic.com user scores followed suit as listeners’ average score for the album tallied just 6.8 out of 10, whereas Penny Sparkle’s three most recent predecessors reaped scores over 8.

Statistics don’t always tell the full story, however. Simone Pace spoke with Submerge on a rare day off on the road. He sounded tired, but happy to “finally have a little privacy.”

Much like the constantly changing face of their music, Blonde Redhead is also mixing things up with their current North American tour. In addition to playing major markets–New York, Los Angeles, Houston and their one Northern California stop in San Francisco–the band has also played a few dates off the beaten path, such as Newport, Ky., and Carborro, N.C. The band also spent a good deal of time working on the visual component for these live performances, working with Jonah Strauss to design a lighting element for the shows.

“We wanted to do something special for these shows, because we’ve never had that. It’s always a pity, because it does make a big difference,” Simone said. “The idea was to do something that wasn’t like a rock show, but do something a little more arty.”

Simone said the look of the show is also evolving.

“Now we keep developing it,” Simone said. “Every night we talk about different concepts about how to make it not only a rock show, but a different experience altogether.”

The artistic approach to their live lighting is probably in reaction to the feel of Blonde Redhead’s new album. Rich with electronic flourishes and spacey vocals, Penny Sparkle is also surprisingly simple and direct. It’s the sort of album that either lends itself to being savored in its entirely or becoming severely misunderstood. Perhaps that’s why reaction to it has been lukewarm so far.

Penny Sparkle was produced by Van Rivers and The Subliminal Kid, the duo of Henrik von Sivers and Peder Mannerfelt that fostered the spooky-chic sound of Fever Ray’s 2009 eponymous full-length debut. Alan Moulder, who mixed 23, returned for Penny Sparkle; and Drew Brown, who has worked with Radiohead and Beck in the past, provided additional production work. The album was recorded in Stockholm and New York.

“This was a hard one to make,” Simone said of the process of making Penny Sparkle. “It was heavily produced… It was a lot of adjusting and organizing, which is all good. We hired them [Van Rivers and The Subliminal Kid, et al.] for that purpose. After the record was done, you had sort of a weird feeling, because it was such a strange and meticulous process.”

Meticulous would be putting it mildly. The band sequestered itself in Upstate New York to work on the record, then Makino went off alone to Stockholm to work with von Sivers and Mannefelt before returning to work with the rest of the band and Brown at the Magic Shop in New York City.

“There were a lot of people involved and sending files left and right,” Simone explained. “It’s interesting because I’ve never done this before. In the past, we just went into the studio.”

Simone said that puzzle-like way the band pieced the album together made it difficult for him to understand Penny Sparkle at first. Now, as the material has become more familiar, he’s warming up to it.

“My first reaction was I need to step back and listen to this thing and see how it feels, because I didn’t even understand it anymore,” Simone admitted. “What really helped was playing it live. Then you start to really have it make sense in your head. It becomes part of you more. Now, I enjoy it.”

Taking a little time to enjoy his own music isn’t anything new for Simone. He said that the only album of his that he really fell in love with was Blonde Redhead’s second album, La Mia Via Violenta.

“It’s the record that I listen to the most, and I sort of fell in love with it, which usually doesn’t happen with my own records,” Simone said of La Mia Violenta. “It hasn’t happened with any other record as much as that one, but I love this record [Penny Sparkle].”

He said that learning to love Penny Sparkle took time in order to understand the different visions at work in creating it.

“It’s not just me, it’s a lot of different things. It’s Amedeo and Kazu. It’s Henrik and Peder. It’s Drew, who engineered it and Alan mixed it. Everyone had their own visions that I have to digest and almost respect,” Simone said.

With the band approaching a run of two decades together, Simone said that trying to pave new roads for Blonde Redhead to travel has become more difficult, but it’s a task they must endeavor out of necessity.

“The first album, you have your whole life to do it, and every other album, you have one year, two years, three years,” he said. “It becomes hard to reinvent yourself in a way that’s genuine to what you’re doing–in a way that you believe is right. As you go along, it becomes harder, because there aren’t many options. We all feel like the most important thing is giving up who you were before and letting it be its own thing and not trying to redo what you’ve done in the past. It’s important to give something new to the listener.”

Simone said that the set list for the new tour sticks mainly to the new material, but also features songs from the band’s considerable past catalog. And while their music strives to be different from what came before, he said there are certainly common threads.

Trying something new is never easy, especially when those who come to see you play expect–or demand–you to be a certain way. However, those who are fans of the band should expect nothing if not the unexpected from a group that consistently pushes its own boundaries. If you’re looking for business as usual from Blonde Redhead, you’re probably missing the point.