The Circle of Meat 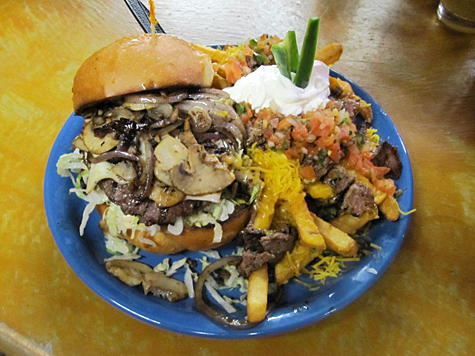 If you prefer white linen or are a supporter of PETA, this is not for you. On the other hand, if you have a hunger for exotic meats and fresh food prepared unpretentiously in large quantities, keep reading. I had been hearing legend of Flaming Grill CafÃ© from numerous people for a couple of years, but I never could motivate myself to make the drive out of downtown. But when a trusted friend and former chef informed me Flaming Grill was serving a lion and gazelle burger (which he jokingly nicknamed “the circle of life burger”), I decided I had let my Midtowner, “if it’s not on the grid it’s too far away,” attitude keep me away long enough.

Last week a couple of my esteemed colleagues and I made the trip down El Camino Avenue to investigate Flaming Grill CafÃ©. To look at Flaming Grill isn’t much; it’s an old gas station with outdoor seating only. It is equipped with a few plastic windows to keep some of the bugs away, some ceiling fans slowly moving air around and poured concrete seats and tables. It is very reminiscent of a small Southern Californian taqueria.

“I’ve been cooking for about 25 years,” owner and sole cook Jose Silva told me. “One day I was searching the for-sale section on Craigslist and found this little coffee shop for sale, so I bought it.” Not much is left of the coffee shop. “We tried selling small breakfast burritos and coffee, but it wasn’t working, so we asked the customers what they wanted,” he said. Obviously burgers were the cuisine of choice, and let me tell you, they don’t just serve your run-of-the-mill hamburgers.

Flaming Grill features some strange and delicious meats: buffalo, Kobe beef, antelope, elk, llama, ostrich, yak and wild boar, as well as a few “specialty while supplies last” meats such as alligator, kangaroo and the aforementioned lion. Since we had sampled many of their “standard” meats at other places, we opted for mushroom Swiss burgers with a kangaroo patty and upgraded our fries to the intriguing carne asada fries. Unfortunately, they were sold out of the lion and gazelle burger; however, I have been informed that it is back in stock in limited quantities on Fridays. 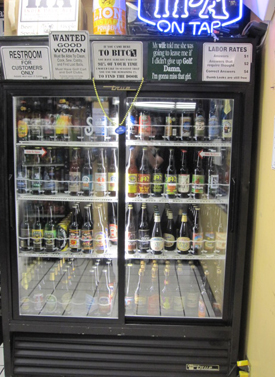 Before our burgers came out, our friendly waitress suggested we check out the beer coolers inside. “I like big hoppy beers,” Silva claimed. This was obvious by the contents of the coolers, which were filled with porters, pale ales and stouts. Flaming Grill keeps it semi-local, promoting many beers from Northern California breweries such as Lagunitas, Anchor Steam, Speakeasy and Sierra Nevada. It’s not all dark, strong beer, though. They stock some of the harder-to-find lighter beers like Shiner Bock, Old Milwaukee and even Schlitz Original in a can!

When our burgers hit the table, we were slightly overwhelmed by the sheer amount of food on the plates. They came complete with a heaping pile of fries smothered in melted cheddar cheese, carne asada, pico de gallo, sour cream and fresh sliced jalapenos. Some of the carne asada bits were cooked a little more than I like, but nonetheless it was still very good.

Oh and the burger–let me tell you about the burger. The bun was fresh, slightly crisp on the outside but tender and sweet on the inside. Unlike certain chain burger joints that serve lettuce that is about to turn and unripe tomatoes, Flaming Grill uses vibrant, fresh lettuce and thick slices of rich, flavorful, ripe tomatoes. The sweet and nutty flavor of the Swiss cheese and mushrooms complemented the strong flavor of the juicy kangaroo patty. No, kangaroo does not taste like chicken. It is a much denser meat that is closer to beef. “I don’t like to season the meat or overload it with sauces,” Silva said. “I like to let the meat stand alone and speak for itself.” He also said that they have gotten hate calls from a few PETA supporters, but “we can’t get anything even close to the endangered species list. Everything we have is legal in the States in certain quantities.” Silva also said if you don’t take his word that the meat is what they say it is, he’ll give you the number to his meat purveyor and you can ask them.

Flaming Grill CafÃ© is about to celebrate its three-year anniversary and will be offering a few specials on Nov. 4, 5 and 6, 2010. When I asked Silva what meats we can look forward to in the future he simply smiled and said, “Camel.”