If The Devil Makes Three was playing music 80 years ago, they would likely be playing saloons with maroon interiors and raucous patrons.

Pete Bernhard, Lucia Turino and Cooper McBean emerged as The Devil Makes Three in Santa Cruz in 2001, after making their way as far west as possible from their hometown in Vermont.

“It was about as far as we would get from Vermont; it seemed like an adventure to us,” Bernhard says. “[California] was somewhere I had been before, but really didn’t know much about.”

Since their beginnings, traveling has been a constant. They bounced around the United States, even landing in Midtown Sacramento and Davis while Turino attended UC Davis. (Bernhard still has a 916 area code, in fact.)

As far as traveling goes, “We really had it in our minds,” Bernhard says. “But the band gave us a reason to do it… We had no idea how much we would end up doing it as a band, but it suited us. It definitely suited us, and I think it still does.”

Along the way, they have mastered a sound that falls somewhere in the realm of jug bands, blues and New Orleans ragtime, playing renowned festivals like Hardly Strictly Bluegrass, and sharing the stage with the likes of Willie Nelson and Emmylou Harris.

With both Bernhard and McBean on banjo and guitar, McBean on the musical saw and Turino on upright bass, it is easy to let your ears take you back in time.

In October they released their fourth studio album, I’m a Stranger Here. Days from now, they will embark on a tour to promote the record, making a stop in Sacramento in early February for the first time in more than three years, Bernhard estimates. The band will play Ace of Spades with The Brothers Comatose on Feb. 7, 2014.

“Harlow’s is the only venue we’ve ever played in Sacramento,” he says. “This is the first time we have played a venue in Sacramento that’s bigger than Harlow’s.”

The last studio album the band released before I’m a Stranger Here was Do Wrong Right in 2009, recorded at a house in Davis, and mixed at the Hangar, Sacramento’s well-known recording studio.

As far as I’m a Stranger Here goes, it is their first studio record that they have not self-produced. Instead, acclaimed country musician and producer Buddy Miller took on the task, after meeting the band through a shared record label and management company.

Miller suggested they record at Easy Eye Sound, Dan Auerbach’s (of the Black Keys) recording studio. In addition to playing on the album himself, Miller also brought on members of the Preservation Hall Jazz Band, of New Orleans, to perform on the record.

The result? An album that is impossible not to listen to without bouncing or smacking your knee.

“One of the things we’ve always tried to do with our records is capture the feeling we have playing live, and it’s always been a really hard thing to do,” Bernhard says. “I think this record was the most fun to make, of any record we’ve ever made, and I’m hoping, if anything, that that’s transmitted.”

Beneath the thrill of the fiddles and banjos, however, are somewhat dark and sobering words. Though religion has never played much of a role in the members’ lives, biblical themes crop up throughout the album.

“I know this album is definitely a little bit darker than some of our previous records, and that’s just circumstantial, honestly,” Bernhard says. “I didn’t set out to do that necessarily, but as we put the record together, those were the songs that came to the surface as the best ones.”

In “A Moment’s Rest,” he laments “Lord, I got a heart full of hatred, for me there sure ain’t no cure. I wake up and I’m running, I don’t know what I’m running for.”

Simply put, it’s a song about ceaseless dissatisfaction, he explains.

“That’s another thing that keeps me going, as far as being a musician goes, is I’m never satisfied with anything that I do, either,” he adds. “I always think that I could do something better, and I hope that I always could. So, dissatisfaction is a theme in my lyrics, and probably always will be.”

Performing runs in each band member’s blood; all three come from a line of performers. Turino’s parents were dance teachers, and Bernhard and McBean both were surrounded by musicians growing up.

Bernhard and McBean bonded over music early on.

“Both of our families had huge record collections, and I think that’s really where we got our start,” Bernhard says. “When I was 12 years old, my brother gave me all the Willie Dixon recordings, and Howlin’ Wolf, and the complete recordings of Robert Johnson, and a lot of other blues artists that he thought I would like.

“And I love that stuff. That’s still what I love,” he adds.

Even before Devil Makes Three became a band, they were friends first, as far back as high school.

“We’ve always wanted to do this, and we’ve been pretty single-minded about it,” Bernhard says. “And that’s held us together.”

Regarding I’m a Stranger Here, what prompted that title, because for me that is a familiar feeling.
Us doing what we do, it is a problem that we are strangers everywhere we go. Every day we’re in a different city, and we don’t spend a whole lot of time at a home. It also comes from an old Gus Cannon song.

I think I read that it was Buddy Miller’s idea to go to Dan Auerbach’s studio?
Yeah, it was Buddy’s idea. I had never even heard of Dan’s studio. A lot of good stuff has been recorded there. Dan and Buddy are friends, and he thought it would be a cool place to do it, and that it would have the right feel. And I thought it was perfect, it was a great idea. It was a lot of fun, and we really enjoyed working with the engineer, too.

How long were you guys there?
Not long. I’d say two weeks. We recorded the whole album live, for the most part—all the basic tracks and live vocals—so when we got a good take it was pretty much done. We didn’t take a ton of time in the studio. We spent probably as much time mixing as we did recording.

How did you guys pull the Preservation Hall Jazz Band into playing?
That was Buddy. He played with them before. He suggested it, and I thought it was a great idea, but I had no idea that it could actually happen. He called them up, and we got them on the record. It was amazing. I was really happy that all that came together.

Another thing that I heard on this record was a number of religious references. So why the religious references, and why even did you guys choose Devil Makes Three? Did it just sound cool, or was there anything behind that?
Devil Makes Three was chosen by a friend of ours, actually, when we were all having a big argument about band names. We all agreed upon it, and that’s how we ended up with that name. I guess it did just sound cool, but also there were three of us, and it’s a reference to a song, which, like I said, we like to do that in our songs.

And the sort of biblical references…
Oh yeah. I love gospel music, it’s definitely a big inspiration to me. I listen to a lot of old gospel groups, and I just love their music. A friend of mine in Santa Cruz got me interested in it a long time ago, and I’ve always really loved that kind of music… Also, the Bible is a story that everyone knows. Almost everyone, or it seems like almost everybody, knows part of it in the United States… The stories in the Bible are some of the oldest stories around, and I think it’s an interesting place to draw from in terms of material, and just to sort of try to tell a story within it.

What sort of impact were you hoping to have on your listener, or your listener’s ear, with this album?
Oh, well, I kind of leave that up to the listener, you know what I mean? I think that music is up for interpretation. Whatever impact I hope to have isn’t necessarily going to pan out… People’s interpretation of music is a strange thing. Sometimes people are talking to me about a song, and they’ll say it meant this to them, and I’ll think, “It didn’t mean that to me at all,” but that’s the great thing about music.

The Devil Makes Three show at Ace of Spades has Sold Out. Be sure to check out I’m a Stranger Here at Thedevilmakesthree.com. 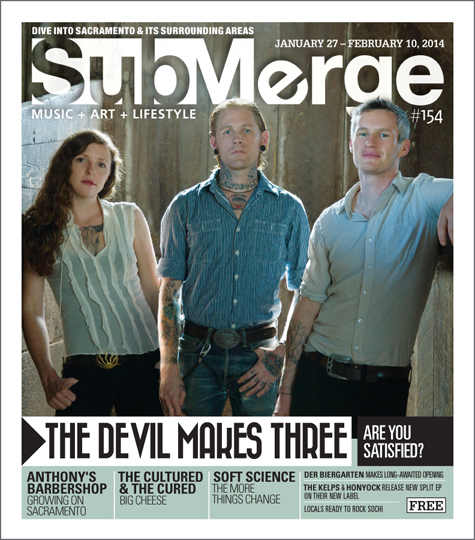