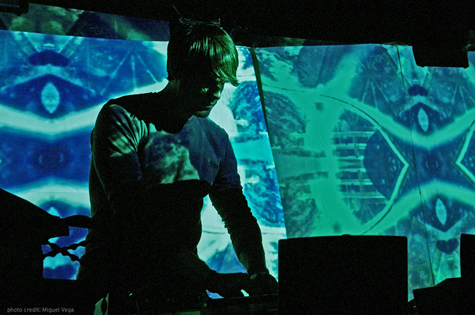 Sacramento is a cowtown; we cannot escape that fact. Living in a city disrespected by the rest of California keeps us out of the Hypemachine, to a fault, but it’s also a benefit. Our artists move to San Francisco and blow up, resulting in press that neglects to mention origins prior to the Bay Area. Ambient electronica darling Tycho is one of our lost children. But not lost entirely as Tycho, who in a brief interview, enlightened me to the reunion of a lost scene he once helped cultivate in his true hometown.

“We used to have this thing called Command Collective,” Scott Hansen said. Hansen is Tycho, and Tycho is on the rise in national exposure with the Coastal Brake 12-inch on Ghostly International. Hansen was raised in Fair Oaks and lived in Midtown for eight years, where he made his first two (and a half, somehow) albums. Circumstances lacking relevance to this story resulted in Hansen moving to San Francisco, but he spoke with candor of his fledgling years in Sacramento designing Tha Fruitbat’s album art, Blue Bell compilation covers and Command Collective show posters.

“Doing those show posters and compilation covers were the impetus to my whole style,” he said. “I talk about it like it was a big deal in my career, at least in my head, but I don’t know how much of an impact it had on the random people who went to the shows.”

The early Noughties were ripe with enthusiasm for electronic music. A new millennium aroused hope of flying cars and space-age fabrics that would dress us down in shiny suits. Electronic music, devoid of organic instruments made of brass, wood, sheep intestines, gourds and bones, was an evolutionary step providing temperance to our insecurities about relying on advanced technologies as the providers of aural fascination. Unfortunately, for some, watching a nerdy dude stand at a laptop, nodding to his push-button performance lacked the visceral visual aesthetic of rock star power poses and frenetic shirtless drummers drenched in sweat.

Opinions varied, but according to reports, there was a consensus that between 2002 and 2004 Command Collective shows at Espresso Metro were “the scene.” For those who lived for it, it was a window of fortunate times. For some outsiders trying to understand the emerging scene, attention spans were tried with grueling self-indulgent sets.

“It was a pretty loose deal,” Hansen said. “It wasn’t like we were a group making music together. The reality of it was we were the only electronic musicians in Sacramento. We might as well play these shows together rather than open up for a bunch of rock bands.”

Command Collective was Dusty Brown, Evan Schneider (who operated as Tha Fruitbat and formed the groups Hysteresis Loop and Two Playa Game), Park Avenue (now known as Lifeliner), Tycho and Chachi Jones. DJ Mupetblast was the resident DJ of the collective, filling in the downtime between sets at the Metro. “Donald [Bell, Chachi Jones] and Tycho put [the collective] together to reel in all the top dudes from the different crews that were doing beat shows,” Schneider said. The collective focused on IDM, jungle and ambient sounds. There was a dance scene, that cannot be ignored, but it was another scene entirely.

Schneider began in ’98 with his band Hysteresis Loop. He and Dusty Brown came up together as operators in the drum and bass scene at raves and underground venues. Later, Schneider and Dain Fitzgerald, known as DJ Mupetblast, had Synthetic Sundays, a weekly (later became monthly) night of electronic music at The Press Club.

Schneider said the impact of Command Collective as a voice for the electronic scene resulted in the inclusion of an electronica award in The Sammies. The addition was prompted by a biting letter from Bell to the editor, who responded to a negative review of a Metro show. “He was the writer in the group,” Schnieder said. “It was great that he used his skills to volley some back at the critics.”

Several factors contributed to the dissolution of Command Collective. The Rave Act limiting the underground shows, a dwindling support of electronic music by venues, promoters and fans, the revivals of rock and folk as respected genres and the collective’s members’ lives changing. Chachi Jones moved to San Francisco for a six-figure editing job, and Hansen had his journey to pursue as well. Everyone carried on, but the name slowly dissipated with the scene.
“It felt like things died a couple years after it got started,” Hansen said. “Metro got sold, which was one of the only venues sympathetic to our cause at the time. People knew about those shows and it was a really cool centralized location. After that [closed] the whole movement lost steam.”

As for the “dude at a laptop” performance criticism, Schneider said it was a crutch of the era adapting to change. “When you’re someone who started with racks of samplers, synths and shit and you finally get a laptop with all that built inside of it, you do have a whole studio onstage. It’s just hidden,” he said. “It also wasn’t very affordable for any of us to do a sick multimedia show.”

Therein lies a vital adaptation by electronica, the inclusion of visual aids to pull your attention away from the man at the laptop. Tycho’s live set is ripe with live tweaked visuals based around his graphic design. Schneider said he tries to bring a “video guy” to his bigger shows as well.

When Hansen blogged on his ISO50 design Web site about the Sacramento Electronica Music Festival, he did not hesitate to mention the partial reunion of Command Collective; partial because Chachi Jones is not playing. The SEMF could be the first step in a resurgence of the scene and Schneider feels the climate is right for it. “Everybody is stoked on the post-Command Collective stuff,” he said in regards to Tycho. “The scene has expanded as far as people making more diverse music. Most of the indie rock and IDM people have heard of Tycho. I’ve been to Seattle and have people know who Tycho and the Command Collective are.”

When Hansen attends shows that Dusty invites him to, he gets the occasional scene supporter of yore regaling him with “I miss those days” comments. Besides nostalgia for the tight-knit scene he once cultivated, Hansen said he misses Sacramento in general. Schneider said with the name garnering a buzz, he hopes for an integrated scene once again. He mentioned Sister Crayon and CityState as the fresh talent emerging that could bring new life to the scene. “My exposure to the scene now is whatever Dusty is doing,” Hansen said. “From what I’ve heard from Dusty, things are on the upswing again.”

Catch Tycho along with a long list of performers at the Sacramento Electronica Music Festival from Jan. 28-30. For a full lineup and more information, go to www.sacelectronicafest.tumblr.com