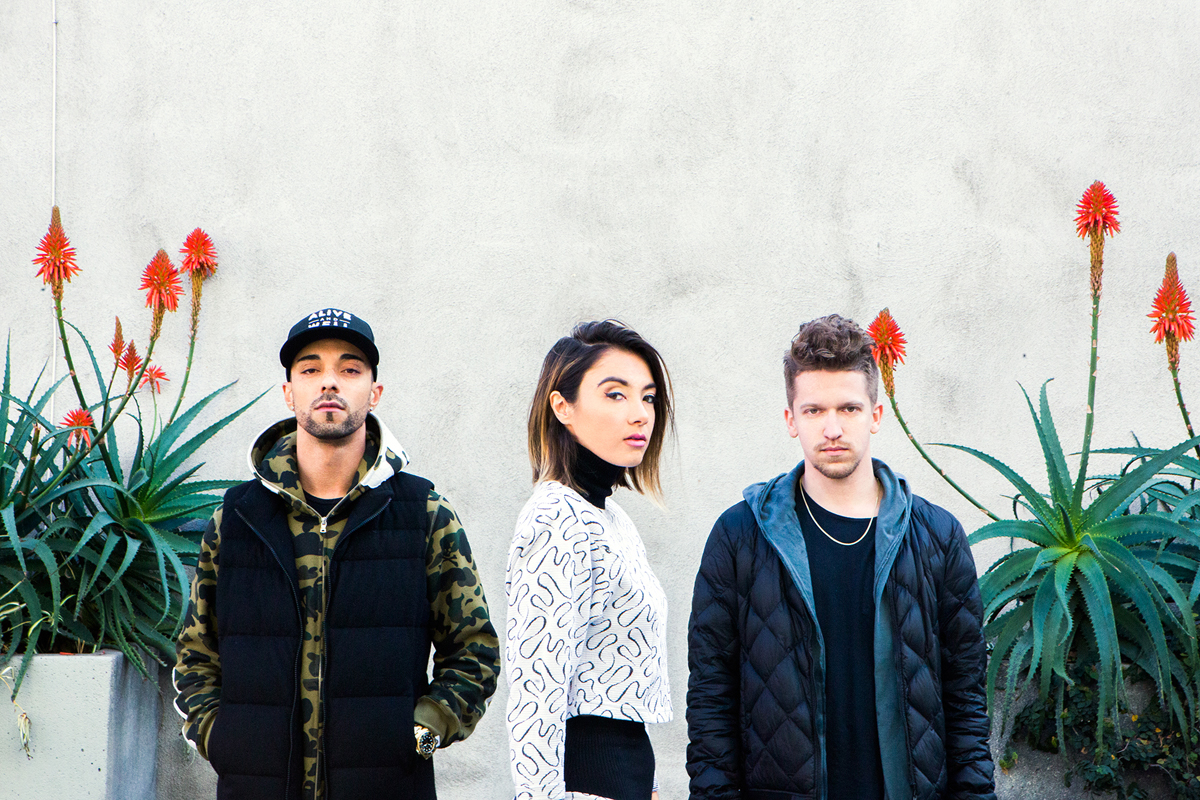 The Seattle-based three-piece band The Flavr Blue describes itself briefly on Facebook as “synthesized love notes, dreams, vices and a whole lot of Flavr!” The first of those tags proves especially true with their latest EP, and the last, without question, has held up through the span of their career.

The trio’s third release, Love Notes, which dropped this past November, stands as a testament to their ever-evolving sound and versatility in and between different genres.

Musically, The Flavr Blue sprouted from a more uptempo, almost purely electro-pop foundation on 2012’s Pisces, then expanded into a more ambient soundscape on 2013’s Bright Vices and now, almost three years later, has really settled down into perhaps the most intimate, organic R&B groove it’s ever been in.

Compared to the group’s last two collaborative endeavors—where vocal duties were oftentimes shared evenly between band members Parker Joe, Lace Cadence and standout songstress Hollis Wong-Wear—Love Notes serves as a particularly noteworthy moment, for its the bands lone female member who graces a majority of the eight-track EP as the lead singer.

It’s fitting, too, that Wong-Wear is getting a bit more spotlight within the band, seeing how she’s made the biggest splash in mainstream media as of late.

Having provided the hook for Macklemore and Ryan Lewis’ hit “White Walls” off their Grammy award-winning debut album The Heist—not to mention working production on two other videos from that record as well—Wong-Wear has probably been the most active of her Flavr Blue counterparts.

In addition to singing, songwriting and producing, she also engages her local community in a variety of capacities. From speaking publicly and performing slam poetry at conferences and conventions to serving on the Seattle Center Advisory Commission and Seattle Music Commission, among other public arts agencies, Wong-Wear certainly wears a number of hats, to say the least.

Most recently, she’s been outspoken about a controversial headline her hometown paper—the Seattle Times—wrote about her, where her achievements as both an independent and collaborative artist were downplayed and then, at the same time, coated in racial connotations that left a bad taste in just about everyone’s mouth who heard about it.

The original December headline, which has been corrected and publicly apologized for since, read: “Warmth and intimacy from The Flavr Blue with Macklemore sidekick Hollis Wong-Wear.”

As the Seattle band ventures on their latest outing around the country in promotion of Love Notes, Submerge was able to talk music, band dynamics and the aftermath of the Seattle Times bungle with The Flavr Blue in a phone interview that shed some light on where things stand with each other, the media and the future of their careers.

I wanted to touch on the latest EP, Love Notes, and just kind of work our way down into other topics. I have my own ideas on the differences between this project and your last two. But I’m curious what you guys think are the main distinctions.
Lace Cadence: Bringing in more live elements to it, honestly. Because, definitely, on our first album—Pisces—it was pretty much strictly electronic-based. And on our second project, we kind of started to mold a little bit more instrumentation into it. And Love Notes is definitely kind of the opposite—just, like, more instrumentation. More live music, and way less electronic aspects.

As far as inspiration goes for writing, I’m guessing everyone is drawing from their own personal experience. Right? Or do you all lean on one person’s experience for song content, or is it just a collaboration between everyone?
LC: It’s usually intended to be a collab, but I think it leans a little bit more on Hollis—for this record especially, because she does most of the vocals. So it’s coming from all of us, but I think it’s a little bit more personally geared toward some of the things Hollis was dealing with. Because she had to a lot more of the writing on this project, so it’s going to come from her a little bit more.

Hollis, what were some of the things you were going through at the time that you leaned on for inspiration in writing a majority of this record?
Hollis Wong-Wear: I think one good realization that I had through writing this project was—obviously this project is called Love Notes. And I think romantic love is obviously like a through line for the concept of the songs. But also, it was just a reminder that the idea of love is really universal and actually transcends just a romantic or personal relationship. It can actually just kind of touch on your relationship with anything, whether that’s, like, the world or your own aspirations or your dream of being an artist. So to have heartache doesn’t necessarily mean you get your heart broken by a single person. You can have heartache from different things … So it was just a reminder for me that even though it can be channeled into the relatable kind of one-on-one relationship, that really doesn’t define your relationship with everything.

I noticed the pace of each album has gotten progressively slower and more intimate, at least that’s my take. Do you guys get that sense too, and if so, was that move deliberate?
Parker Joe: Yeah, I think that’s pretty accurate. A lot of that happened pretty naturally. Again, it’s like Lace said—just starting to work with more live instruments and rehearsing and just having a guitar around to start to doodle around on a song. We started replacing something we used to do with a synth with a guitar, and it just very naturally progressed.

Is that a trajectory you guys are trying to maintain going forward? Slowing things down a little?
PJ: Some of the songs on Love Notes—like “Supply”—we started two or two and a half years before they came out. It’s interesting, because there’s a song on there called “Oxygen” and another called “Pretty Girl.” Both of those are sort of collaborative songs that we did only, like, five or six months before the project came out. And those are much more club-y and dance-y, so we still kind of have that goal as a group and that passion for more upbeat stuff as well. But we definitely focused this project toward songs that kind of melded together in a package that felt more intimate. And that’s definitely what Love Notes became.

I wanted to ask about the dynamic of the group a little and how the media has tended to cover you guys. It seems like Hollis usually gets a lot of the exclusive interviews and sort of represents the band on her own a lot. Do you or Parker ever feel like your roles in the band are minimalized at all because of that, or like you’re not getting as much credit or coverage as either one of you deserve?
LC: That’s a good question. Um, no, not at all. We’re in this together and just because Hollis is an active, popular young lady, that would never bother me. I feel like that only comes back to benefit us. So, if there is any animosity like that going on in the band, I think it’ll just hold us back. So Hollis doing her damn thing is not a problem for me. I feel like a lot of people wonder that, and it’s not a problem for us.

Hollis, I know you wear a lot of different hats in your professional life … As your careers move along with The Flavr Blue, do you feel like one of those roles will have take precedence while the others take a back seat?
HWW: I mean, for me, I’m always somebody who enjoys working collaboratively. But The Flavr Blue is my main musical project. And it’s a project I’m passionate about bringing to light and to follow its evolution. And that’s not going to interfere with how I work with other people or do my own independent work. I’ve been a freelancer for, like, the last four or five years. So I think people perceive me as doing a bunch of different things, but it’s actually like an ecosystem of how I support myself as a working artist. So I’ll just continue to make decisions for myself that best benefit my artistic growth, including growing The Flavr Blue.

I wanted to ask about the recent Seattle Times headline that called you a sidekick. Since this all happened in December and there’s been a couple months of backlash, is it settled now, or is it still an ongoing issue?
HWW: I’m not somebody to dwell or to even make a scene of something. And my desire, obviously once the initial headline came out, wasn’t to half-wage a campaign against my hometown paper or to try to call people out. But at the same time, I have a really strong support system in my city and my community, and I felt it would be remiss of me to not publicly comment on what my experience was. And I think it speaks, to me, about my passion for equity and my passion for everybody to have dignity in media coverage. And if I were able to use the example of how I was treated to just kind of cast a light on how artists of color and communities of color are portrayed in the media—like, it’s a growing call. It’s not like I’m a spearheading a movement by any means. But I guess I’m not interested in dwelling on any one incident. But I am interested in organizing around the need for artists and historically marginalized people to be better represented, to be respectfully represented and the way we’re covered in the press.

I know the editor-in-chief eventually apologized publicly and privately. Do you feel like you need more from them for closure?
HWW: Honestly, my sights are set a little higher than engaging one-on-one with the Seattle Times. I talked to the editor-in-chief and we had a conversation, and then I left that conversation stating my hopes for them that they would take their collective education and evolve seriously. But I’m not really interested in hand-holding any one institution. I’m more interested in organizing and generating within my community and within my band and in my artistic career, rather than trying to reform another organization or institution.

Are there any similarities that you guys are aware of between Sacramento and Seattle at all? Or do any of you have any memories of Sac, or have you ever been before?
HWW: Yeah, we played TBD [Fest] in September and that was awesome. And then we also played Lowbrau last year—or maybe two years ago—in November when we did our first West Coast run. We had a really fantastic time. I don’t know, we had a really strong [showing]. A lot of people came out. People in Sacramento really enjoy independent music and have really sophisticated music taste. So every time we’ve been in Sacramento, it’s been a real pleasure for sure.

The Flavr Blue returns to Lowbrau in Sacramento on March 8, 2016. Doors open at 9 p.m., and the show is FREE. To RSVP, go to Facebook.com/letwisttuesdays. In addition to great music, there will also be drink specials. Lowbrau is located in the MARRS Building (1050 20th Street in Sacramento).