The Fruits of Sacramento 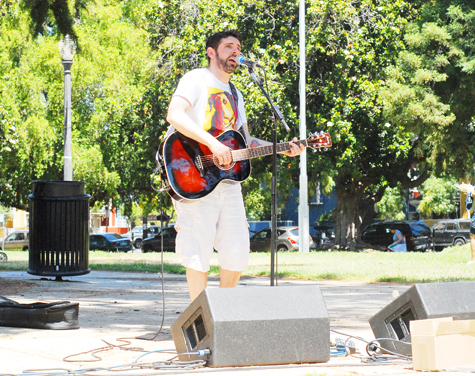 Yes it’s clichÃ©, but it’s true what they say: you don’t realize what you’re missing until it’s gone. After passing time in a microcosm with a population of just over 1000, where you are lucky if there’s a live band playing once a week, or if a tree reaches 10 feet, a visit back to Sacramento reminds you of all that you have been missing.

Take the free Hot Lunch Concert series at Fremont Park, for instance. A makeshift stage planted between tacky, whimsical ceramic statues and towering trees triggers moments of nostalgia that only this city can provide.

Singer/songwriter Jonah Matranga seemed to feel the same way when he played there last Thursday. Matranga spent a chunk of his musical career in Sacramento, developing his former band Far, in addition to his solo project Onelinedrawing. He lives in the Bay Area now, but he came to town to play a few shows, including this one at the park.

“I can’t thank this place enough,” he said to a crowd that had grown from about 20 to 75 middle-aged adults and kids spread out on picnic blankets and lawn chairs.

For the music scene, cheap rent and all-ages clubs that allowed him to flourish as a musician, he owes Sacramento his gratitude, he explained.

Appearing at ease in his white tee and khakis, he was a one-man show and sustained an ongoing conversation with the crowd, his acoustic guitar and the PA system being his only accompaniments onstage.

He began the set with three velvety, acoustic Prince covers, including “Purple Rain,” “Kiss” and “The Cross,” tributes to the legendary performer, who had apparently been spotted around town. Then he delved into his own material, stopping frequently, sometimes mid-song, to comment on being badgered for singing “The Cross” despite being Jewish, or about his love for Neil Young and Eddie Vedder.

Despite his quirky, spirited demeanor, at any given moment Matranga’s songs shifted from uplifting to depressing as he played pieces both from his solo career and from Far. He would sing about springtime, fingerpicking a cheery pop song, and then alternate to a minor key, pounding his guitar strings while delivering cryptic lyrics on spending too much time thinking about ways to die.

Someone who has been in the music scene as long as Matranga has plenty to sing about. Throughout his career he has grown accustomed to the workings of the music business and watched his daughter grow up. He sang frequently of both.

“Every Mistake,” he said, was for his daughter, words of wisdom insisting that living is about making mistakes and embracing them with grace.

Whatever he was doing on stage was working. As he progressed through the set, audience members young and old trickled forward to make donations and pick up a CD from the box that lay at Matranga’s feet.

At some point a disheveled drifter wandered up to Matranga to make a litany of song requests, which included artists Eric Clapton, Paul McCartney and Elton John. In acquiescence, Matranga played “In My Life” by the Beatles.

Soon enough, the shade receded from the crowd back toward the trees, and the relentless sun hanging overhead prompted several onlookers to start packing up their blankets and chairs. By this time Matranga was preparing to play his last two songs.

“There are lots of mopey songs in the world. I’ve written about half of them,” he said, offering an explanation of his next song, “Smile,” which extends a dose of optimism regarding life.

“If you’re here right now you are ridiculously privileged,” he added.

Just then, a group of fashionable young women happened to ride past on their pink and sea green cruisers with shiny silver handlebars, outfitted in sundresses and shades.

Indeed, an afternoon spent listening to music on a picnic blanket beneath trees isn’t so easy to come by in other places. If you are living in the City of Trees, do us a favor and take it in, and don’t forget that you’ve got it made.