The Red Bull Studios Copenhagen website is written entirely in Danish, but search “CHLLNGR” and you’ll likely land on a video mostly spoken in English, aside from a few locals in a bread store. The video features CHLLNGR (stylized, vowel-less Challenger), an experimental dub music project masterminded by Steven Jess Borth II, laying down tracks in the Red Bull Studio for its sophomore record, Form of Release. The documentary mostly depicts scenery from Copenhagen and the studio, recording artists in indigenous garb from New York City and rappers from the United Kingdom, but in the midst of this global project is Sacramento. Oddly, our city has played a pivotal role in Borth’s project since its inception in 2010.

CHLLNGR performed at the Submerge 50th Issue Party in 2010, having graced the magazine cover in anticipation of his then-untitled debut album. At the time CHLLNGR was in a larval state, still largely faithful to dub music traditions of instrumental reworkings of recordings that slug along at a reggae beat stripped to its “riddims,” which translates to bass and drums. It’s a genre pioneered by artists like Lee “Scratch” Perry, Errol Thompson and King Tubby.

In those days CHLLNGR consisted of Borth, Andrew “Young Aundee” Southard and Dan “DJ Whores” Osterhoff in the live setup. But behind the scenes, the project relied on a troupe of local collaborators who continue to be influential cogs four years later on Form of Release, namely Dusty Brown and Justin “Dr. Echo” DeHart.

Much like British outfit Unkle, CHLLNGR defies simplistic classification because Borth seemingly doesn’t have “no” in his vocabulary. It loosely takes the form of a collective, rather than a solo project, as each release hosts a revolving cast both credited as guest features and buried in the fine print of liner notes. The only consistency across CHLLNGR’s two LPs (Form of Release and 2011’s debut Haven), outtakes release Hidden Tracks, and the Datter EP are Borth and the mastering finesse of Dr. Echo. Well, perhaps one other: Sacramento.

For example, Haven’s closer “Dusty” features vocals from Jessica Brown, a long-time contributor to her brother’s eponymous project Dusty Brown. The lyrics to “Dusty” were written by Young Aundee, while the title of the song is assumed to be a reference to Dusty, who opened his studio to Borth to create early Haven demos.

“Dusty gave me access to all his vintage gear,” Borth said. “In that period Young Aundee was there in Dusty’s studio most of the time and he played a really big part. He did most of the arrangements for [“Dusty”], also he did the lead synth on ‘Ask For’ and quite a bit more.”

In the initial Submerge interview, Borth mentioned a few particularly noisy recording sessions with Zach Hill of Death Grips, although it is unknown if they were utilized for Haven—given its nocturnal, downtempo qualities I’m inclined to think not. But in those early sessions Borth’s mindset was hinged upon experimentation. Whereas on Form of Release, CHLLNGR has evolved into a wish list come true of vocalists and co-producers.

“Form of Release, I really wanted to have a vocal album,” he said. “I was comfortable with some instrumentals, but I definitely wanted something that was not necessarily traditional pop songs, but a weird pop music.”

The detraction from having Red Bull’s insoluble budget was that Borth got his wish in the form of a curse. The album features JOSIAHWISE IS THE SERPENTWITHFEET from New York City, Dels from the United Kingdom, Grace Hall of Skin Town from Los Angeles, Blaqstarr from Maryland, and no possibility of uniting this group for a live set, particularly JOSIAHWISE, who contributes to five tracks.

“It’s pretty much just been me,” Borth said. “I’ll sing the songs in their place. With JOSIAH’s songs it’s very tough because he’s an insanely talented vocalist and writes complicated melodies I can’t exactly pull off.”

When I ask about his live setup for his New Year’s Eve performance at this year’s TBD’s New Year’s Eve Block Pary, Borth laughs at the thought as he mentions he’ll have to rely on Sacramento once again. “I need to start sending some emails around because I need to borrow some equipment,” he said. “But I want some old friends to join me on stage as well.”

If Borth is the captain of CHLLNGR, Dr. Echo is his first mate. Through emails he wrote that he and Borth never met properly in Sacramento, though he theorizes they were “probably in the same place at the same time on numerous occasions.” Though his connection to Sacramento has faded, Dr. Echo began as a drummer in dub band The Defendants with former !!! member Tyler Pope, and later ran Soundlab Studios in various Midtown locations before moving to Los Angeles in 2002. Having mixed “98 percent” of CHLLNGR’s output, Dr. Echo was flown out from his current home in Anaheim to Copenhagen on Red Bull’s dollar at Borth’s request. Dusty Brown was also flown to the studio in the last week for the task of “filling in the gaps,” according to Borth.

“Dusty was crucial,” Borth said. “It’s always been in the back of my head to collaborate more with him. I just have a lot of respect for him, his stylings, how quick he is and how he can really bring his ideas to the table and they can be very well thought-out. He has so many years of experience with electronic music that he can just get in there and finish up any ideas that I had started. He tied up the loose ends in a huge way.”

Borth is the captain of CHLLNGR, there’s no questioning it. In a Skype call we discussed the process of recording in the Red Bull Studio and he notes that the majority of the songwriting was done on his laptop with a micro-Korg and spring reverb prior to their three-week recording stint. He said the documentary just captures the focused grind of piecing an album together in three weeks.

“Most of it was doing really nerdy stuff,” he said. “Just running the sounds I’d already made and having the other collaborators record their vocal parts. Dels came out and JOSIAH came out. Justin [Dr. Echo] was there pretty much the whole time with me.”

As first mate, Dr. Echo has witnessed the evolution of CHLLNGR from dub homage to a spacious nocturnal metamorphosis on Haven, and into the Form of Release sessions, which reveal CHLLNGR at its most pop-y and universally catered state. He attributes the early alterations to Borth’s love of R&B as a heavy influence on the distinct sound, particularly in the melodies and harmonies, and the more recent growth to his prolific mind for collaboration.

“I think it should be evident that dub music from the ‘70s to ‘80s is a major influence on his sound,” Dr. Echo wrote. “However, ‘dub’ can be a vague term these days. Qualities such as spaciousness, sonic subversiveness and otherworldliness seem to remain appropriate to CHLLNGR’s sound throughout the years… I really think CHLLNGR’s music truly exists in the cracks of today’s genres.”

Ring in the New Year with CHLLNGR and an A-list lineup at this TBD’s New Year’s Eve Block Party, which will take place Dec. 31, 2014 (duh) on 20th Street between J and K streets. A-Trak, Sister Crayon and Gigamesh (among others) will also perform. Tickets start at $45. Check out Tbdnye.com for more info. NOTE: #TBDNYE IS ALMOST SOLD OUT! LIMITED AMOUNT OF “LAST MINUTE” TIX ARE STILL AVAILABLE, BUT THEY WON’T BE FOR LONG! ACT NOW IF YOU WANT TO GO! 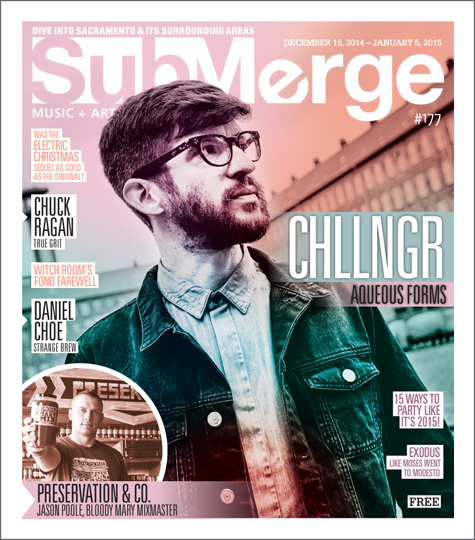