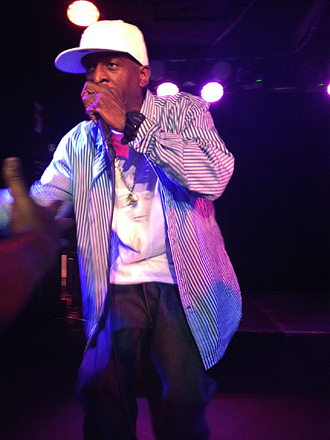 Rakim (aka William Griffin, Jr.; aka the “God MC”) is considered one of the greatest and most influential lyricists and rappers of all time. He has been in the game for more than 25 years, making his lyrical debut with the single “Eric B. Is President” (a tribute to his DJ, Eric B.). Together, Eric B. and Rakim made four albums and created such classics as “I Ain’t No joke” and “Paid in Full,” and Rakim displayed just how transformational and talented he was as a hip-hop artist. Throughout their discography, Rakim proved himself to be a true lyricist, focusing on his love of words and respect for the art of writing. As he says in his song, “My Melody”: “I am the man they call the microphonist/With wisdom, which means wise words being spoken…” Rakim changed the game of rap, offering something to the hip-hop community that had never been seen before: an MC whose lyrical precision was as important as the dope beat that accompanied it.

It is interesting to think what the hip-hop community would have been like without the entrance of Rakim. His respect for the art form of hip-hop paved the way for true lyricists and conscious rappers. Without him there wouldn’t be Common, Nas or Mos Def. Rakim is and always will be one of the most respected veterans of the hip-hop community and his debut performance in Sacramento on Sunday night at Harlow’s proved just that.

As I walked in, I was immediately reminded that the lovers of true hip-hop are alive and well in the city of Sacramento. The DJ was spinning the classics of The Notorious B.I.G. and my personal favorites, A Tribe Called Quest. People were drinking and battle dancing as we waited patiently for history to be made with Rakim’s very first performance in our little city.

The show started at around 11:30 p.m.; Rakim was wearing a blue-checkered shirt with gold chains and walked out with his daughter, Destiny (which I thought was a nice, personal touch). The crowd immediately responded with overwhelming excitement, applause and the prompt emergence of smart phones (to snap pictures and record history) as Rakim greeted Harlow’s and delved into his first song.

He played his classics “Paid In Full,” “My Melody” and “Don’t Sweat the Technique” and proved why he was (and is) dubbed a lyrical king. It was truly amazing to see that after 28 years in the game, Rakim still has fully devoted and awesome fans that are willing to venture out late on a Sunday night to witness and pay homage to one of the greatest MCs alive, showing that raw talent will always outlive temporary popularity.

It was a wonderful night to be a hip-hop fan on Sunday. We were all there to have an amazing time and bask in our love of the good and true old-fashioned form of hip-hop. The performance was like a coming together of souls, all there for one purpose: to remember why we fell in love with hip-hop and to remember why we always be in love.

Music, good music, is that one constant thing in life that will never change. It will always be there to center you when life is a mess; it is that thing that will never leave. For many, hip-hop is a genre and a culture that has changed lives; hip-hop is life. And this proved so true on Sunday. It was nice to be out among my fellow hip-hop lovers, taking in the ambiance and the experience of being in the presence of the God MC, Rakim. He put on a great show, taking us all down memory lane, bringing us back to the time when hip-hop was first birthed, and showing us why he is considered a microphone king. Music is forever; hip-hop is forever. *Mic drop*