Keeping It Dreamy with The Good Fortune

What do you do when you are raised on classical music, majored in music in college and played the flute in high school? Start an electronic dream pop band, of course.

That’s exactly what Jeremiah Tsering did when he and four friends—Mark Johnston on guitar, Phillip Moskalets on bass, Dave Moskalets on keyboards and Mark Tuzman on drums—launched The Good Fortune last summer.

“I’ve always had an urge to write, since high school, which was not that long ago. I started playing guitar first then my goal switched over to writing because I kept having all of these sounds playing in my head (I sound like a crazy person), but eventually I was around some people who inspired me to just start recording,” Tsering says.

This urge eventually metamorphosed into a full-on musical effort when Tsering and Johnston were approached by a friend to fill a last-minute slot at a show at Lounge of Life. The fortuitous event would prove to be the catalyst from which The Good Fortune would emerge.

“It was kind of an accident, we had a friend who asked us to play just this one-off [show], and we did a bunch of cover songs and a couple of originals, and it went really well,” Johnston says. “The band meshed really well, and [we] just decided to roll with it because we got a really good reaction and then we accidentally became a band, and it’s been fun.”

While each individual member of the band wasn’t new to the music scene (all five have played in other musical projects and bands), they admit that throwing together a quick set list and forming a band on the fly was a challenge, but one which they fully embraced.

“It was the most bizarre, euphoric thing, Johnson continues. “We walked on stage having no idea what was going to happen and thinking ‘Let’s hope they like the cover songs.’ And people were dancing, people really got into it and we walked off stage and into the green room and we just looked at each other like, ‘That really just happened. OK let’s do another one of these.’ We thought it was going to be a one-off but it was the best. There’s an intangible to getting off stage and going ‘People who I’ve never met in my entire life just liked what I did.’”

The accidental band then forged on, playing shows at small venues and cultivating and honing their lush, dreamy sound. Soon the fivesome were being invited to play at larger gigs, culminating with a performance at this summer’s THIS Midtown block party, a stint at Sam Sascha Keshavarz’s Le Twist Tuesdays dance party and a slot on the bill at the Submerge Presents Lipstick! New Year’s Eve party at Old Ironsides. But all of the attention hasn’t distracted the band from their mission to bring a soulful and thoughtful voice to the local music scene.

“I always had this dream of playing in a band and bringing a team with me and not doing something super selfish—there’s a lot of people out there who write and say ‘It’s all about me,’ so I think it’s really cool when you can do something and involve other people and they can find their role and everyone kind of grows with you, and that’s what it’s been like so far,” Tsering says.

The longtime friends cite their diverse musical backgrounds and interests as the spark that ignites their collective passion for bringing their distinct vision of music to life—a vision that strives to balance professionalism with a collaborative spirit where all of the players are empowered to have fun and enjoy themselves.

“We all respect each other as musicians,” Johnston says. “Our bass player Phil has surreal amounts of talent. He’s incredible. One of the other guys in the band, Dave, he was in Nashville like two years ago writing country music. Jeremiah grew up listening to a bunch of progressive, indie rock bands, and I grew up listening to metal and hardcore. But all of those influences … and all of us really respecting each other’s musical backgrounds, and really liking the central vision for what we do, makes it such a fun experience.”

The band’s first EP, Social Crowns, was recorded in Tsering’s home studio and was comprised of a collection of songs that the singer-songwriter had been amassing since his senior year in high school. The experience of writing and recording was a therapeutic experience for the singer, who admits that the process helped him get through a bout of depression and that the music is more than just catchy verses and tunes.

“A lot of those songs I started writing even before we got that first show—probably like a year in advance, in total,” Tsering says. “I’ve been writing pretty consistently since senior year of high school. When music really affects me it bypasses all of the senses and goes straight to the soul and emotions, and it’s almost like a high, it’s crazy. My goal is to have real-life messages that we talk about, that make people think about the lyrics, not like, ‘Oh, this is a catchy tune or this is a catchy verse.’ I want people to think about it a little deeper and maybe understand the meaning of the song or question what it’s about.”

And that is what is at the core of TGF’s musical philosophy—a longing to encourage an honest and thoughtful dialogue about everyday life that isn’t pretentious or isolating that celebrates Sacramento.

“I actually ranted about this the other day on Instagram,” Tsering says. “I see Sacramento as we’re laying a foundation for something, and I feel like a lot of other cities and the world has kind of looked at Sacramento as a second-class city, and I like that. I’ve always felt like the underdog, I’ve always felt like I didn’t really have everything but if I was diligent enough I can go ahead and get to the place I need to be, so that’s where I see Sacramento. Especially with festivals like TBD and how that’s growing, and I see the growth of these things and I just want to be part of it and contribute as much as we can to show people that Sacramento isn’t some random city that you just pass through; we have culture, we have a lot of great things.”

The bandmates’ love for music and the magic that a live performance can conjure is also at the center of what they want to bring to the vital Sacramento music scene. As the band looks to the new year, they’re encouraging themselves to continue to push forward. They’re currently working on news songs and hope to release their first full-length effort next year while also embracing the DIY ethos that is at the heart of the new music business by looking to create a series of music videos on YouTube. Oh, and if we’re lucky we might even see Tsering bust out the flute during a future performance.

See The Good Fortune live at Old Ironsides as part of the Lipstick New Year’s Eve party, presented by Submerge. DJs Shaun Slaughter, Adam Jay and Roger Carpio will also be on hand. Admission is just $10 and the party starts at 9 p.m. Go to Theoldironsides.com for more information. 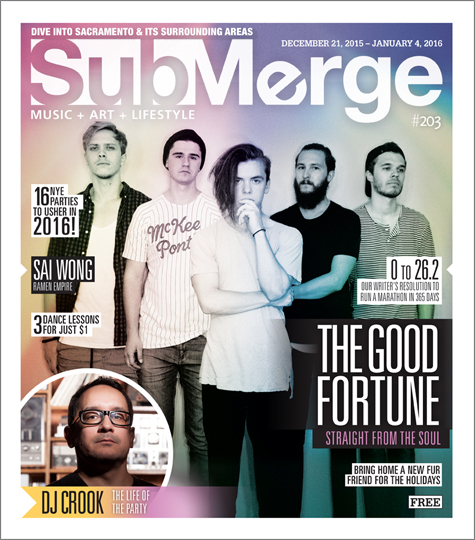