The Kimberly Trip are All Outta Bubblegum

Love at first sight, a whirlwind romance and rock ‘n’ roll…Ah, the recipe for matrimonial bliss. At least for Kimberlina and Jeffry Wynne Prince, two-fourths of The Kimberly Trip, the Sacramento band that combines snarky lyrics, spacey guitar hooks, synth-laden tracks and soaring female vocals into a singular sonic experience.

But don’t let the seriousness of their musicianship fool you. It is a source of pride that The Trip doesn’t take itself too seriously. Submerge recently sat down with the lovebirds to talk about the band’s evolving sound, what inspires their music and the awesome power of unicorns (the band’s sixth studio release is titled Unicorns, Glitter, & Heartbreak, after all).

“Yes, [unicorns] are magic,” Kimberlina, the band’s vocalist, jokes. “See, I like to refer to that album as UGH, because that’s what it spells out: U, G, H. And it’s just quicker—it saves all that mouth work, but I do like unicorns, too.”

And the part about heartbreak, you ask?

“Because unicorns aren’t real,” Kimberlina says with a wink and a nod.

Not one to let the interview veer off onto that rainbow path where mythical creatures roam, Prince chimes in with a more profound explanation of the album’s genesis.

“When I named the album, I noticed the songs pointed to three kinds of things going on in life,” he explains. “One was like shiny optimism, which is kind of like glitter. One is just fantasizing about improving your life and the other is about having your heart broken. So it just seemed like unicorns, glitter and heartbreak encompassed, in a conceptual way, the songs.”

In the span of 13 years, The Kimberly Trip (which also includes Bractune on drums and bassist Michaelandrew) have cut eight albums, thrown legendary DIY warehouse shows, been named Songwriters of the Year by the West Coast Songwriters Association, surpassed 100,000 digital downloads on their website and will commemorate their 500th show on the Concerts in the Park stage on July 25, 2014—a show that coincides with the band’s CD release party for I’m All Outta Bubblegum, which Prince explains as an album of jumbled fragments that is as far removed from the classic Trip vibe as a vibe can get.

“It’s got tons of keyboards and technical elements really outside of our wheelhouse [of music], so we thought it would be interesting to kind of dovetail with the Concerts in the Park, giving our fans a reason to come out,” Prince explains.

While the musical juggernaut chugs on, it’s fair to say that all of these accolades, accomplishments and awards would be but a distant dream if it weren’t for Prince’s tenacity in winning Kimberlina’s heart at a gig on the Sunset Strip. Where else, right?

“In fact, the way I picked up on her was I booked a gig in Southern California in Hollywood, closer to where she lived so I could bribe her to come see us,” Prince explains. “Because I knew once she saw the rockstarness that was happening on stage she would be mine.”

“And that is totally how it went down,” Kimberlina confirms. “So, it’s in Hollywood on Sunset Strip, you know, super premium place to have a gig, right, and he comes out on stage and in the middle of Hollywood, shouts out, ‘Hello, Lodi!’”

“She was the only one that got the joke,” Prince says with a grin.

And that’s all it took. He had ensnared Kimberlina into his web of rock stardom. A quick 10 months later the two were man and wife, and living blissfully in their home and studio in Fair Oaks. But it wasn’t until months later that Prince happened upon her vocal prowess.

“I knew she’d been a singer…but I’d never heard her sing,” Prince says. “So, I hadn’t heard her sing until two months after we got married. She heard me working on a song and she came in and she goes, ‘I have a harmony idea,’ and she sang what she was hearing and I kind of lost my mind over what she sounded like, so we formed the band that day.” 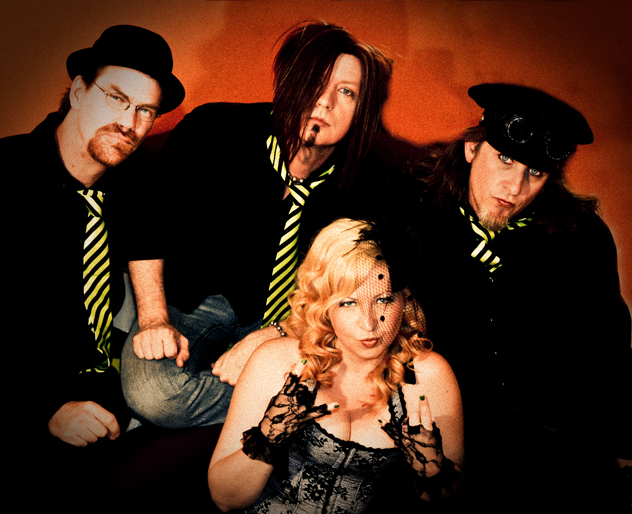 While Prince was blown away by his newly betrothed’s vocal range and beauty, it wasn’t until their roommate at the time, Bractune, who has been making music with Prince since 1984, came home and confirmed they had stumbled upon vocal gold.

“More importantly, she impressed our drummer Bractune,” Prince says. “I had recorded what she had done, and I played for him and he was like, ‘Who the hell is this?’ It’s Kim. ‘That’s ridiculous, there’s our singer.’”

From there, their sound and vision solidified. Committed to making their wry, tongue-in-cheek variety of music on their own terms, just last year they ditched the major-label system and began releasing their music solely on the band website. Moreover, they could fully embrace their songwriting process, which always begins with a song title, Prince explains.

The duo also produces material for TV and films, allowing the band to fully explore its musical vision.

“Back when we started in 2001, music seemed to be really serious and we wanted to be different,” he explains. “When we first started, Kim had mentioned in the early songwriting sessions that there’s a certain point where it becomes OK to laugh at yourself, and when you laugh at yourself life becomes better.”

Kimberlina nods emphatically in agreement as her gaze falls lovingly on her partner in music.

“I mean, I’m gonna just talk in clichés here, but there’s an idea of giving a voice to the voiceless and having a sense of humor about yourself and, at its core, I think music and art in general is a way to help people feel their feelings, or to express their feelings,” she says.

But not letting her trademark smart-ass nature off the hook, she continues.

“I know, I’m way over-thinking the pop-y crap that we do but, yeah, that’s our voice,” she adds with a wry grin drawn on her cherry-hued lips.

“And in our socially dysfunctional microcosm of dysfunction, there are infinite song titles,” Prince adds, riffing off Kimberlina’s vibe of sarcasm and snark.

Because the song title is king in Prince’s world. And, he’ll argue, what’s the use of a badass song if its title isn’t an incendiary send-up of this kooky world we live in of glittery unicorns grieving over lost lovers?

The Kimberly Trip’s CD Release Show for I’m All Outta Bubble Gum is a free, all-ages Concert in the Park show at Cesar Chavez Plaza July 25, 2014. They’ll be joined by the Brodys, Pointdexter and more. For more info, visit Kimberlytrip.com or Downtownsac.org/events/concerts-in-the-park. 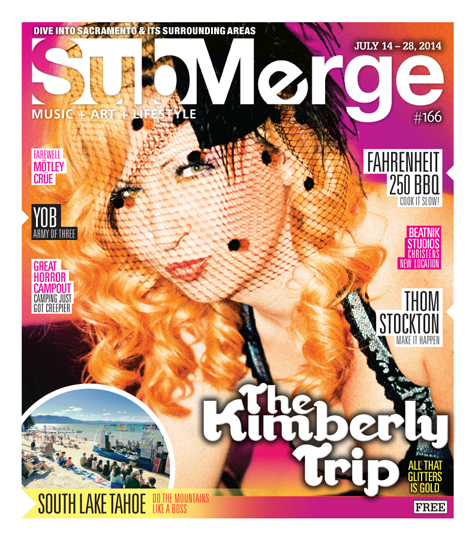