Break Down the Funk: Sacramento Native Rasar Amani Unfolds the Intricacies of His Band The Lique’s First Album 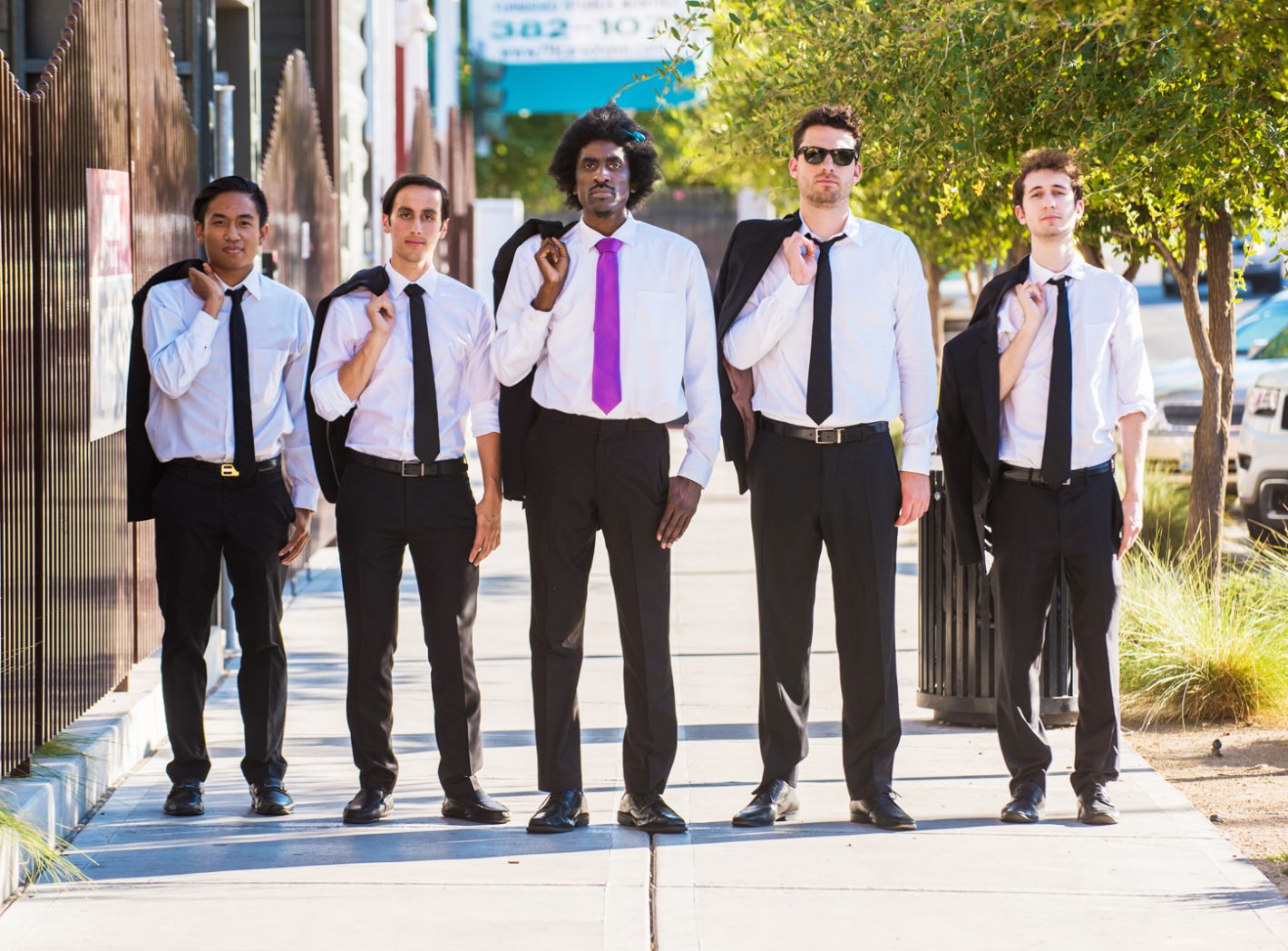 Followers of Sacramento’s underground hip-hop and spoken word circuits may recall the smooth, slick-talking voice of Rasar Amani, formerly Random Abiladeze. He was one of the kids behind the cash register at Dimple Records more than 10 years ago, the only MC on Sacramento sensation Joe Kye’s EP Joseph in the Well and a regular at local venues and colleges.

A call in 2013 from a close friend—world champion beatboxer and America’s Got Talent finalist Butterscotch—led Rasar to try his luck in Las Vegas. That call, Rasar says, forever changed his life. He credits Butterscotch for where he is today—the lead vocalist of one of Las Vegas’ top-rated new bands, The Lique.

Rasar wasn’t looking to join a band. He had completed a successful run in a nightclub show and was planning to leave Las Vegas last year when a friend told him about a group of local jazz musicians looking for an MC.

Guitarist Sean Carbone had a vision for a hip-hop jazz band. His University of Nevada, Las Vegas (UNLV) peers Jeremy Klewicki on drums and Nick Schmitt on bass joined him first. After offering the MC gig to Rasar, the group found Jason Corpuz (“the dopest piano player,” according to Rasar) and in the last year and a half, have scored a residency at a local club, toured venues like Brooklyn Bowl in New York, played music festivals and recorded the band’s debut album Democracy Manifest.

The Lique plays Harlow’s in Sacramento on Friday, Sept. 30 as main support at the album release show for Rituals of Mine (formerly known as Sister Crayon) with James Cavern opening the show. The following night, Saturday, Oct. 1, The Lique will head to Downieville, California to play at ZuhGFest, a grassroots festival at the Sierra Shangri-La Resort along the Yuba River.

Creation of The Lique and Democracy Manifest
Rasar says the guys didn’t know what kind of band The Lique was going to be when they formed. They started off playing his old tracks from the 10 albums he had recorded over the last decade, but as their fan base grew in a matter a months, the need for new material and a unique sound was evident. They had become THE hip-hop band in Las Vegas.

“We had the vision of being classy, wearing suits, having kind of a jazz feel,” he says. “We all got thrown in together and we knew we were musicians but it took a few weird talks about time and the fourth dimension and somehow politics and police brutality came up, but we had never talked about this stuff before over the four months we knew each other. When it came up, I thought, oh, we can go there? That changed the writing.”

Rasar’s past music is rife with political and social commentary, but he hesitated politicizing his fellow cats who just wanted to groove.

“But once we started talking about death and religion … now I write some challenging stuff,” he says. “That was a turning point in the kitchen.”

To get a taste of what The Lique is all about, listen to the track “Billie’s Holiday.”

“It really shows what kind of band we are and goes to the heart of what we want to accomplish here,” Rasar says.

Hidden within the track are approximately 20 Billie Holiday songs. The song itself is about traveling, Rasar notes, and how we have to get away from our comfort zones.

The Lique’s look also has a backstory and its own track on the record. The last track, “The Suits,” was inspired directly by what Rasar, who functioned as the band’s manager and booker until recently, calls the “red tape, hierarchical b.s.” of the music industry.

“We’re a conundrum to the higher ups,” he says. “We’re underground, but we’re sophisticated enough that it confuses people. There’s a ton of suits out here—that’s why we wear suits, because it’s ironic. It comes from me traveling the world with Butterscotch and realizing people took me more seriously when I dressed up. So the whole thing is a big, fat wink in everybody’s faces.”

Rasar tells the story of an agent saying, “We gotta appease the suits” when he tried booking a gig. The funny phrase reminded him of a James Brown song called “Pass the Peas” and the Brown-inspired lyrics and riffs for “The Suits” was born.

The industry’s recent repressive ways are a bit of a theme on the album, and Rasar talks at length about 360 record deals that cause artists to lose themselves and their brand as executive greed takes over.

“Walk into my Office” speaks to that in an eerie, Mr. Grinch meets Led Zeppelin kind of way, through a blend of storytelling, characters, voice changes and rap. The song, like many of the others on the album, has multiple layers and side stories. It’s one of the most bizarre hip-hop tracks you’ll listen to this year. You may even have heard it already in one if its reincarnations.

“Walk into my Office” is a remake from a song Rasar did in 2010 in collaboration with Adambomb from New Orleans. Rasar’s (then known as Random Abiladeze) album Indubitably has the original version, which is two-and-a-half minutes long (the current version is more than six minutes).

“I showed the band the song and they loved it,” Rasar says. “We started exploring it, and I would start telling crazier and crazier stories live with it that were never recorded.”

A few obscure references pop up in the album version, including a growl tribute to “I Put a Spell on You” by Screamin Jay Hawkins to honor him.

“I saw an awesome documentary on him on YouTube and he was a contemporary to Etta James, Stevie Wonder … all the original rock ‘n’ roll greats but was too weird and a one-hit wonder and fell off.”

The third theatrical verse in the song is also a tribute and intended for Dead Western, a dark folk/new American artist Rasar did a show with in Sacramento in 2008.

“He was one of the weirdest dudes I was ever paired with in my entire career and it was the best thing they could have done. You don’t really get a chance to do songs like this too many times in your entire life.”

(Note: Rasar has not been able to reach Dead Western to share the song, so, Dead Western, if you read this, contact Rasar).

Another standout track is “Democrashy Manifesht,” which juxtaposes Rasar’s compelling, often agitated lyrics of historical and political significance with the range and expertise of The Lique’s musicians. The backdrop could almost be a 1950s Las Vegas steakhouse, but without the veil in front of the realities of racism and power struggles.

“My parents are older so I grew up on jazz, Motown, gospel, and my dad is from the old deep South, while segregation was still a thing,” he says. “He was born when WWII was rocking on, growing up around the Klan. Yes, I talk on current issues, but there are so many levels of how we got to where we are right now.”

“Democrashy Manifesht” is controversial, but The Lique finds engagement is an important part of their M.O.

“People are making noise but not impact,” Rasar says. “Every moment is potentially wasted if you’re not doing something toward progress and that’s what this album is about. How can we get all this genre bending, norms shifting, sounds and ideas out in 40 minutes without sounding rushed. The epitome of this band, this album, and the city of Las Vegas is how to fit an hour into 40 minutes.”

Collaborators on the Album
More than 20 people contributed sound to this album, including Rasar’s friend Butterscotch on the song “Soul for You.” Rasar credits her for making him the star he is today, connecting him globally through tours and appearances and bringing him to Las Vegas.

UC Davis alum Ruby Ibarra, one of Rasar’s best friends, is on “Nastiness.” DJ Mr. Vibe scratches on that song and he rolls with the Sacramento crew Sleepwalkers, who work with legendary crew, Hieroglyphics. Rasar reconnected with DJ Mr. Vibe when he moved to Vegas to head up music for the Jabawockeez show at MGM.

But for Rasar, the two biggest contributors to the album are sound engineer Dan Brodbeck and Bay Area hip-hop legend Zion-I.

“The unofficial sixth member of the band is Dan Brodbeck,” he says. “He is one of the best audio engineers in the world. He won a Juno [Canadian Grammy] and worked with Dolores O’Riordan from The Cranberries. We recorded in the back of an old vinyl record shop, which set the tone for the album.”

Zion-I is one of those people who is really big but you don’t know it until you see him, according to Rasar.

“Someone gave me his album in 2005 and it’s one of my top albums of all time,” he says. “I had a chance to open for him at Sac State and UC Davis years ago. When he was in Vegas last year, he remembered me. All of a sudden this person I had been looking up to all these years really wanted to connect with me as, it’s hard to say an equal, but we’re all equal as human beings. It was a dream come true.”

For Rasar, working with Zion-I was indication that he’s on the right path.

“The resilience that brings you back to the people you need to connect with, is what the song [Zion-I is on] is about, ‘The Frequency.’ The whole point is how your vibe attracts your tribe and that’s why we put him on the song. He always talks about that energy kind of like a hip-hop hippie.”

Learn more about The Lique and keep up with their tour dates at Thelique.com or at Facebook.com/theliqueband. Check out their debut album Democracy Manifest via the Bandcamp player below. 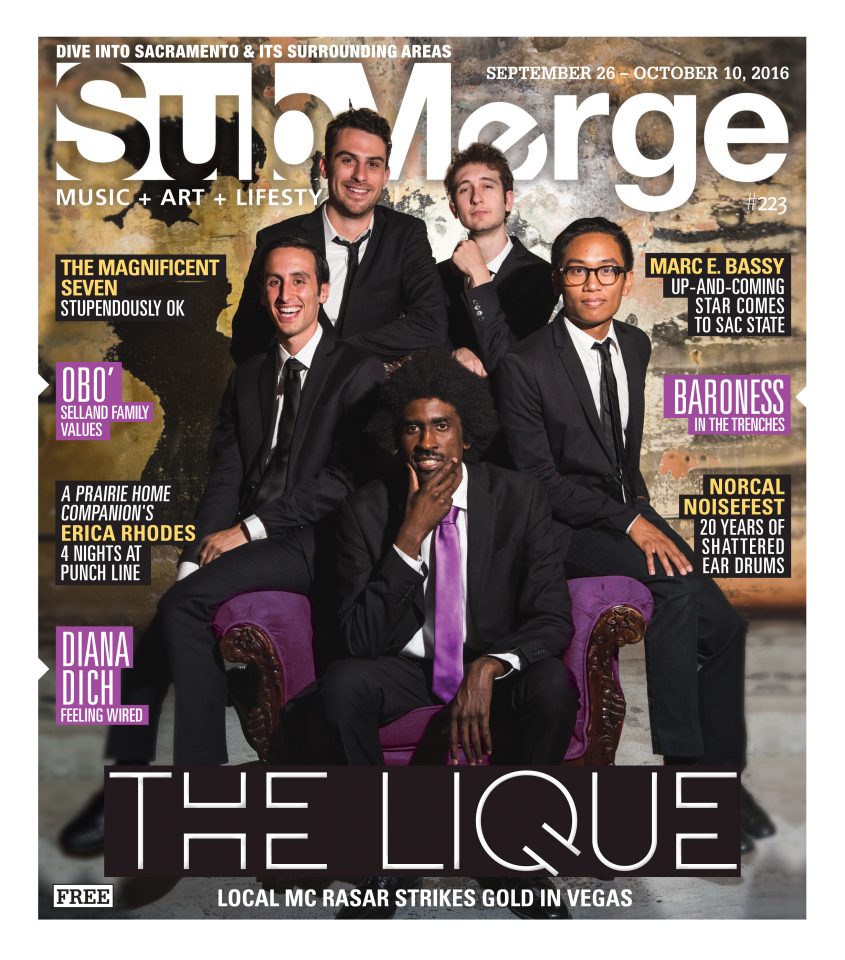