Chase Moore Steps to the Mic for Cawzlos’s LMNH Records

For the true MC, proving oneself in a battle is paramount; not just to prove he is gifted, unlimited with rhymes universal, but as a chance to rep his crew and community. Only the choicest of battle rappers are able to put such weight on their shoulders. After an evening conversation with Chase Moore and his crewmate Cawzlos, it is apparent that someone is hungry for some weight.

Intimidating is not synonymous with Chase Moore’s physical presence. He stands comparative to the average California male, but it’s rash to discount his size in a battle. Mixing words, Chase Moore stands strong on his own, tossing punch lines like darts at his opponents. In March, Chase battled in Santa Cruz, practically eating a burnout local rapper named Dopey Delik alive with lines like, “So if you swear you got great diction/Beware of Chase spitting/You should be scared I’ll raid where you living/I know you got chips/Your parents paid your tuition.“ Stingers.

If you follow the battle circuit, the names will become hella familiar; but rarely is it possible to find music from the rappers, and even more difficult to find good music. For Chase, battling seems like an effortless exercise requiring minimal practice. Chase’s true grind comes from the pursuit of notoriety outside the spitkicker circuit. “[Battling] is really just to raise awareness for my album,” Chase said “I can definitely do both. Ninety-five percent of [battle rappers] make horrible music. You’ll hear rappers who are amazing in battles and you throw on the record and it’s”¦ [Chase shudders at the thought] I spend a lot more time in the studio than I do battling.”

Born into music, Chase’s father, Neil Moore, is an accomplished pianist who invented a playing-based piano teaching method called Simply Music. In 1994, Neil moved his family from Australia to the United States to start his business, which is now an international success. In speaking about his father, Chase used words like “visionary” and “entrepreneur,” appreciating his father’s hustle. “It didn’t happen over night,” he said. “Me, my brother and my sister shared the same room for years. It’s dope, though, that he had that much faith and belief.”

Growing up Down Under, he said exposure to hip-hop beyond commercial hits brought over from the United States was limited. Chase borrowed an old keyboard from his dad in eighth grade to make beats. He learned the drums in seventh grade and said every year he took the hobby to heart, eventually rhyming over his production. It’s no surprise a young Chase was influenced by Wu-Tang Clan’s debut, Enter the Wu-Tang: 36 Chambers. Chase said hearing “Bring Da Ruckus” in sixth grade blew his mind. Now, Chase blasts a hype verse in a gruff voice that’s tough like an elephant tusk. “By the time I really got into hip-hop I had lost my accent,” he said.

Chase spent his young adult life rapping in numerous groups, self-releasing albums to mixed reception. His group Capital Conspiracy earned a Sammie nomination. Chase attributes his youth and limited business knowledge to these ephemeral albums, some of which were never released. In 2007 Chase and Cawzlos moved to Los Angeles with the intentions of getting a record deal.

Young and hungry, the two linked up with Mike Conception, a former Crip who worked with Eazy-E, Dr. Dre and MC Hammer. Conception also allegedly struck a deal with Russell Simmons to call off a hit on rap group 3rd Bass, who dissed Hammer on record, in exchange for a seat next to Michael Jackson at the 1990 American Music Awards. Chase’s song “Lonely Road” briefly addresses his stint in Los Angeles, “I was thrown for a loop/Basically, I was too broke for some food.“ “Working with a heavy hitter in the streets was a crazy experience, but I wouldn’t change it for the world,” Chase said. “For me, as an artist and producer, I just had to move back, regroup and start over.”

Chase is scheduled to release his debut, Moore to Chase, in July on LMNH (Look Mama No Hands) records, a label run by PCM (Paper Chase Music) crewmate Cawzlos. Two years in the making, Moore to Chase seemed doomed from Chase’s lack of focus and his struggles with procrastination. “Because I’m a battle rapper, I relied on a lot of punchlines and wordplay,” he said. “A lot of the material I did lacked content—just smoking weed references and I’m-better-than-you, generic content.”

Now 23 years old, Chase rung in 2009 with a renewed clarity, quitting weed and booze cold turkey. As we sat down to talk at Aura on J St., we casually ordered drinks; myself a Dos Equis and Chase a diet cola. “I started smoking and drinking around 12,” he said. “It got to a point where I was blacking out every weekend, smoking zips of weed. I just felt like I was getting sidetracked.” Chase admitted the vices never go away—a time might come when he returns to them. “I just wanted to get my head clear,” he said. “It was hard at first, but it’s for the better. I made a pact to myself that I will be sober this whole year.”

“I was always loaded in the studio,” he said. Hearing his music sober, Chase spent January re-recording old songs and writing personal songs delving into his struggles with establishing an identity and turning his back on addiction. On “Lonely Road” Chase declares, “In order for my clique to get ample wealth/There’s a lot of business I got to handle myself/And I’m not demanding help.”

Chase and Cawzlos are fervid in establishing their crew and label into Sacramento streets. Fed up with a lack of community support, Cawzlos caused a couple eating dinner next to our table to leave as he shouted “fuck you”s to local radio stations and bars that won’t support local music without payola. “We act as if we hate politics, but at the end of the day our front yard is the Capital,” he said. “We politic like crazy. We clique up. We campaign hard.”

As Chase and I talked, Cawzlos paced the block, talking on his phone and with fellow musicians who happened to pass by. Cawzlos expressed frustration with his contemporaries. He said the conversation was essentially two people “all about their own shit.” Cawzlos recalled when, only a few years ago, Sacramento hip-hop was thriving with artists getting features in Vibe magazine. He said cold shoulders from radio stations caused artists to turn cold shoulders on each other. “If people continually shun you, you’ll recreate a new method to getting your shit out there. And when you figure out your niche, you’re not telling the next guy. Why would you tell the next guy, because it took you 14 years to figure out how to even get to this point?”

It’s not all distaste for Sacramento. Cawzlos is featured on Chase’s album on a cut called “City of Trees,” in which the duo shows love. “We don’t deny that we’re from here, or that we love it here,” Cawzlos said. On “City of Trees” Chase acknowledges a hurt that lingers here as he raps, “When Robert Horry hit the shot we couldn’t stand the Lakers/Could you believe it?/Ai-yo Maloofs we need a new arena.”

The crew recognizes the next few months as a gamble with Chase as the guinea pig. “If you want to swim, you gotta jump in the water,” Chase said. “We’re coming in a big-ass boat ready to dive in the water.” Cawzlos added, “Yeah, I want to be rap star, but as a CEO I have to decide who is the most fit to play that role on our label right now. Even for me to say that, it hurts as an artist, but I’m realistic. Chase is our flagship artist and Moore to Chase is going to be the stepping stone for everyone to follow.”

Moore to Chase will be released in July as a dual package that includes Right on Time, a collection of extra songs that did not make the debut cut. “You have to give a lot more before you can be ready to receive,” Cawzlos said. Catch Chase in Oakland on June 6 battling in the Grind Time Battle of the Bay IV. 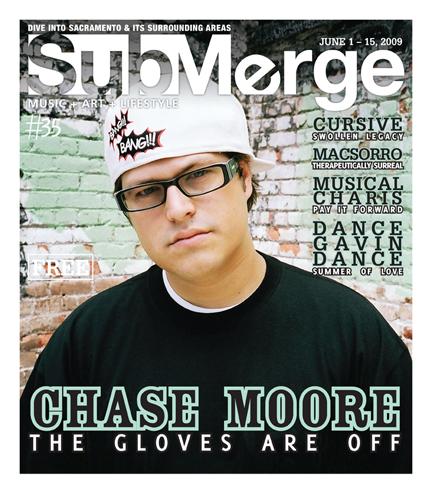