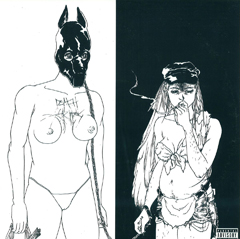 The capital of California, which few could pick out on a map will be the talk of the industry with the release of experimental hip-hop group Death Grips’ Epic debut, The Money Store. Sacramento will faintly appear in every major online and print music publication. It will travel to Ireland and the United Kingdom and stand out awkwardly amongst write-ups in French and German. The strangest of times lie ahead.

Last year’s Ex-Military mixtape unveiled a top-secret project of a highly classified nature, kept in the confines of Oak Park. Death Grips was not a local favorite that got its big break after years of cold shoulders. It was a phenomenon that rattled our cages and left us scratching our heads as to where the fuck it came from. Every announcement surrounding the band is bigger than the last; Coachella dates, All Tomorrow’s Parties appearance, signing to Epic, two albums in 2012 and a European tour. The warp speed of its success is as terrifying and mind-blowing as the music.

Ratchet man Andy Morin, aka Flatlander, and Zach Hill are the Reanimators of the group, who possibly stumbled upon the breakthroughs that led to Death Grips on Hill’s last solo album, Face Tat. The track “Jackers,” with its stem-warps, revving blips and manic drumming, sounds like the birthplace of Death Grips. The two mad scientists were just missing a vessel, which they discovered in Stefan Burnett, aka MC Ride.

The Death Grips sound is a break beat science that experiments with hip-hop echoism, EDM machinations and the wonky warble of (groan) dub-step. The double helix is constructed with a precisionist’s care, only to have a deadly virus unleashed as though Hyde sought to sabotage Jekyll’s work.

As much as we want to seek derivatives for Death Grips, none of them will satisfy; because as you listen to the first five tracks on The Money Store, it’s undeniable that they are without contemporaries or purebred lineage. Sample-based music was a stagnant art form until now; evolving into the digital catalog of stems. Death Grips collect, record and warp them like diggers obsess over vinyl. But Death Grips’ source material is infinite since it ranges from borrowed drum breaks sent through heavy filter or a looped guttural roar from Ride. The Black Google zip file, which included every stem, a capella and instrumental from Ex-Military, wasn’t just for us to tinker and remix, but a glimpse into the creative process. The same goes for the 109 GIFs currently obliterating computer speakers on the Third Worlds website. Ride is a threat without the assistance of effects, but Death Grips is all the more menacing when the track screeches and caterwauls much like horror films allow black cats to jump across cameras and serial killers to stand directly behind terrified damsels–the quick shock hits keep us on our toes.

Small traces of influence, or intention, trickle through The Money Store; Salt N’ Pepa’s “Push It” as performed by 2 Live Crew on “I’ve Seen Footage” is the most blatant, while “Hacker” bears striking resemblance to the outside-the-club sounds in the opening minutes of Daft Punk’s “Revolution 909,” except standing on the fringes of the hopeful patron line is Ride, plotting on whose car is getting jacked once they go inside.

The Money Store pushes Death Grips’ unique sound into a darker realm than the explorations found on Ex-Military, despite the mixtape crippling our senses and causing a cesspool of miscalculated pedigree. It’s inspired and moving faster than we can compute, which is frustrating since it’s only starting to sink in without the nuisance of definition beyond simply calling it Death Grips. In a year’s time, zero copycat bands or established groups attempted to mimic Death Grips as recognition of a new wave. Death Grips stand unchallenged. As MC Ride puts it on “Hacker,” “The table’s flipped, now we got all the coconuts, bitch!”

Much of the intoxicating danger and aggro-rap histrionics in Ex-Military have undergone mutation and the progression suggests that by No Love, the band’s second 2012 record, we’ll have little trace of bread crumbs leading back to introductory tracks like “Guillotine” and “Known For It.” In 23 songs between two records, Death Grips’ movement rivals the intensity of a warpath or rampage with no looking back. It has led them to the kung-fu chamber to face their greatest adversary, themselves, in order to become masters. All that’s left in gauging the impact of The Money Store is the passage of time, but that’s for the canonical talkers, which Death Grips have no time for.

See Death Grips live at Harlow’s on May 5, 2012 as part of Sacramento Electronic Music Festival.