A Little Bit Country, A Little Bit Rock ‘n’ Roll • The Nickel Slots Spill the Beans on Their Fourth Album 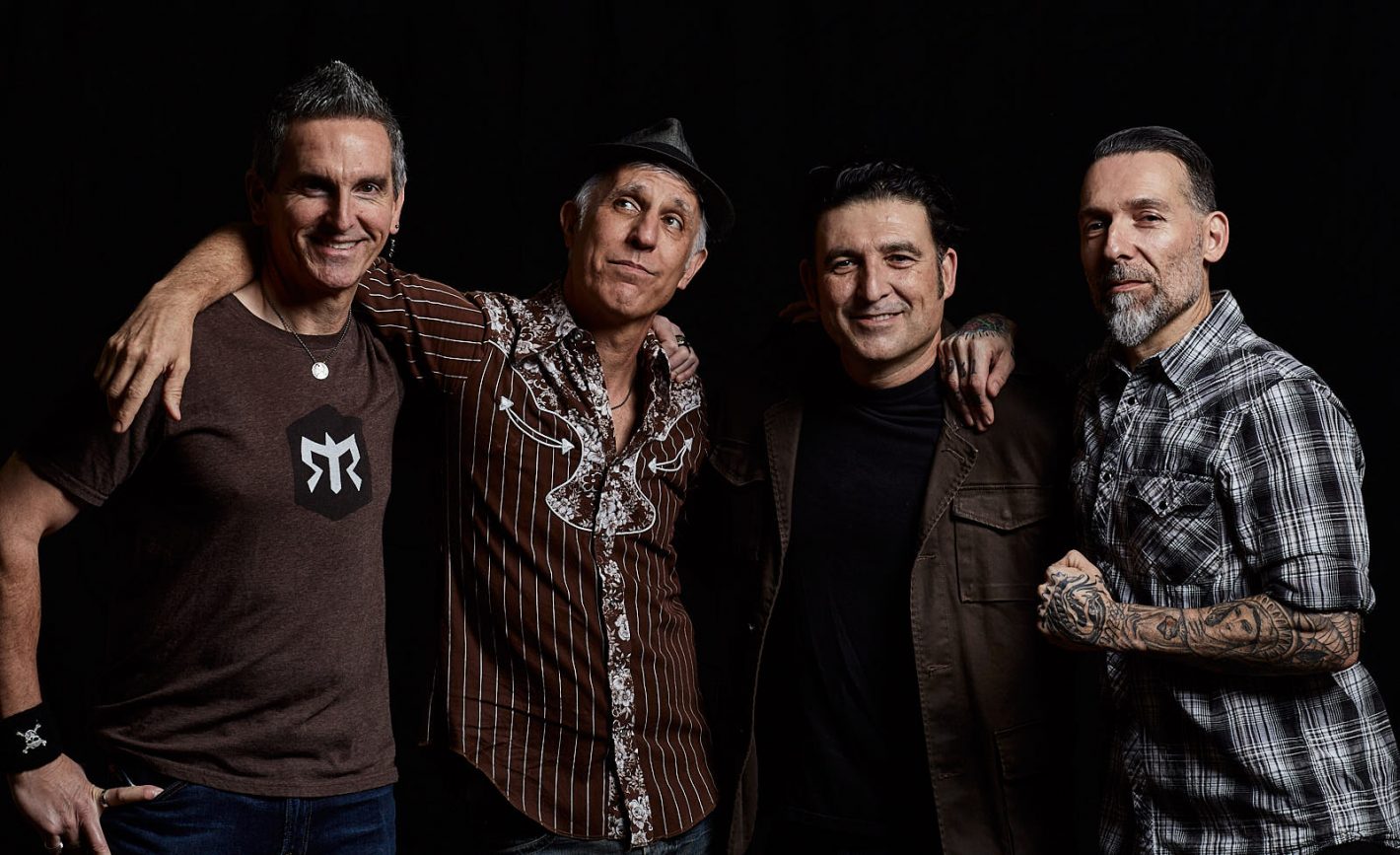 Just over a decade ago, as the country wilted into the pits of a recession, four Sacramento-area musicians found themselves at a shared musical crossroads that gave birth to The Nickel Slots. Ten years later, the band is not only still together, they’ve become a staple in the local Americana, roots-rock scene and are about to release their fourth album of original material.

The Nickel Slots have played a steady parade of West Coast shows over the years and toured Europe four times—all while starting families and working day jobs.

Fronted by Tony Brusca, formerly of local pop-punk favorite The Brodys, The Nickel Slots put an Americana spin on anthemic rock ‘n’ roll. In both projects, Brusca writes the bones of his songs on an acoustic guitar. He’s a natural storyteller, and can string together an immaculately melodic hook, which is a foundational quality in The Nickel Slots discography.

The Nickel Slots formed as The Brodys and several of the future members’ bands, including Red Star Memorial and Popgun, had begun to slow down some.

“I’m a songwriter,” said Brusca. “I wanted to do something different and evolve with my songwriting. With The Nickel Slots, I hit the ground running.”

The band has carved against the grain to create something truly vibrant, routinely carrying three-hour sets on their own with setlists comprised almost entirely of their own raucous originals.

“Early on in the band,” began Brusca, “we consciously made a decision that, for better or worse, we were going to feel a lot more complete playing original music.”

On Feb. 22, they’ll celebrate the release of their fourth album, Pack Up All Regrets, at The Palms Playhouse in Winters. The album rides the line in true Nickel Slots form, bopping from country to rock to Americana to Irish folk. The show will feature special guests and songs from the new album as well as career-spanning favorites.

I recently caught up with Brusca and guitarist Steve Amaral in late January to talk about songwriting, the band’s longevity and the upcoming release show.

How did The Nickel Slots form?
Tony Brusca: We’ve known each other as musicians forever, and our previous bands had sort of run their course. I was looking to start a band and my wife hooked me up with Steve and his brother Chris [Amaral, drums]. Then we got a hold of Paul [Zinn, bass/mandolin], who’d led the Cal Aggie Marching Band.
Steve Amaral: We all were at a stage of our lives where playing Americana roots-rock let us borrow from our influences to create a sound on the timeless end. We had an instant brotherhood.
TB: We’ve been playing music for years and we love the journey, the load in, the load out, the recording, the practicing, the shows with thousands of people and the ones with four people in the back of the bar. When it’s in your blood and it’s in what you do, you enjoy the entire journey, not just the highs.

What can you tell us about the new album?
TB: I’m constantly trying to tell stories with the lyrics. A lot of our old albums were Americana with attitude; stories about people who were desperate but have a little bit of hope. I wanted to take it to the next level on this. Life is a landfill; it’s crap, but I’m gonna pack up my regrets and go for it—a little less desperate and a little more taking charge.
SA: We’ve got a couple of songs that rock harder and some that are a little more country than others, but they all fit. Tony brings us these naked songs and we get the opportunity to grow and develop them. Paul’s harmonies are as much a part of the sound as the guitar playing.

“Humboldt County Rain” sounds autobiographical. What’s the story behind that song?
TB: I did spend my first paycheck on a microphone from Radio Shack and got a drum set from the classifieds. [Humboldt is] a beautiful place and you love it, but you try to find a way out and pack up your regrets. I found friends who played music and we started little punk bands. Music was sort of my way to dance in the rain.

“Whiskey on Your Grave” hits hard. Could you envision its final form when you started writing it?
TB: I always write acoustic. Even as the songwriter for The Brodys, I wrote on an acoustic guitar. I know the strength of all the guys. When I did “Whiskey …” I knew I wanted heavy rock, so I told them straight up, let’s go for it. We try things and there are no egos. It either sounds good or it doesn’t.
SA: It’s fun when Tony brings a new song. He’s generous with how we get to throw ideas out there. We’re fortunate in that the songwriting holds its own at its bare minimum, but it makes it fun to build up.

“Gun Show” dips into politics. How’d that song come to be?
TB: It’s kind of hard to avoid the topic in today’s world. Although we’re not an outright political band, we do have opinions. We don’t want to be too preachy, but we wanted to fit the theme of packing up regrets. [Sammy] doesn’t have supportive parents or counseling, so his way out is to buy a gun and it’s pretty easy for him. I took it from way too many headlines. I just wanted to paint a picture people could identify with—something that got people thinking.

Why did you decide to hold the release show at The Palms in Winters?
SA: The venue is incredible. It suits our songwriting and is a nice way to present the songs and the stories to a captive audience. We’re fortunate to have a fan base that’s very broad and The Palms gave us the opportunity to play a bit earlier, meaning kids can come, too. I have a 4-year-old and 6-year-old and they love it.

You’ve also toured abroad several times, right?
SA: We’ve gone to Europe four times and played to audiences who don’t consist of any family or friends. They owe us nothing, and the fact that we’ve been well-received and made new friendships that continue to grow is very rewarding. It feels legit that we’ve got a product people like.

With a new album under your belt, what does 2019 hold for The Nickel Slots?
TB: We’ve been focused on this album for such a long time, but we’re a pretty goal-oriented band. We have a promo company helping to get the album on the radio and out in the United States and Europe, and we have a few ideas for new videos—a busy year.
SA: We don’t have a label. We are the label and we all have our roles in the band. It’s a partnership. I’m not saying we don’t argue, but it’s so much fun to see results we weren’t expecting at the start.

To what do you attribute the band’s longevity?
TB: Another reason we’ve survived 10 years and we’re still happy and putting out cool music is we have the support of friends and family. I’ll speak for me, but my wife is my biggest supporter. As a musician with a day job, to have that kind of support and encouragement and love and advice is amazing.
SA: When you’re in a busy band like ours, when somebody gets pregnant, people can quit the band. I met my wife at Guitar Center, so she knew what she was getting into. I have to thank my wife for having the patience and encouragement and support. This band is four families all year long, seven days a week.
TB: I get asked by younger bands sometimes “How have you been around so long?” and stuff like that. It’s about finding the right people, finding balance, having people who encourage and support you. Maybe those musicians will read this stuff and it’ll help them find a way through the maze of wanting to be a lifelong musician. We’re very lucky.

Celebrate the release of The Nickel Slots’ new album, Pack Up All Regrets, at The Palms Playhouse (13 Main St., Winters) on Feb. 22 at 8 p.m. Tickets are $18 ($14 for students). For more info, go to Palmsplayhouse.com. Learn more about the band and check out upcoming show dates at Thenickelslotsmusic.com.