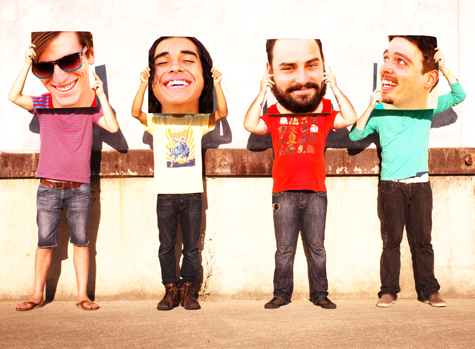 During the course of 19 months, four guys have managed to accomplish what most bands attempt to achieve in years: to get noticed. The “rock and soul” Sacramento group, The Old Screen Door, is quickly gaining momentum in the local music scene and they are just getting started.

They have received over 2,300 likes on their Facebook band page, recently won Folsom Live Battle of the Bands and are catching the eyes of numerous local concert promoters.

“We are at the point now where we don’t have to cold call for places to play anymore, they are all calling us,” explained frontman Garrett Wildgust in front of Peet’s Coffee. “Due to our unique ability to play with any type of band, we can mold with any kind of group.”

Wildgust and his three band mates, drummer Harrison Reich, bassist Jonathan Maldonado and keyboardist Michael Buck have created music that seems impossible to categorize in one genre. Some could argue that their music sounds similar to blues rock, pop and even progressive rock. They like to stick to good old fashioned “rock ‘n’ roll” but with a classic feel and have a story to tell with each song.

“Everyone would tell us that when they would come to see our show it was like listening to a mix tape because we play one song that’s dance rock, then we play another song that’s blues,” Reich said. “It doesn’t necessarily sound like you are listening to the same band because we really have no stylistic qualifier.”

The Old Screen Door have been working to bring out their first self-titled “mix tape” EP, with five dance songs that have been named “crowd favorites.” Since they were officially formed as a band in March 2011, all four members have agreed to take no pay they receive at gigs but instead place it in their “band bank” in order to get their EP completed.

Each recorded song is not only danceable but gives the audience members something to ponder. Their music holds deeper meanings then what appears on the surface. One of their songs titled “Bar Fight” has nothing to do with drunkards smashing bottles over their heads but is a metaphor for how they think society lives.

“It’s about everyone fighting each other to get ahead,” said Wildgust. “When are we going to stop repeating history and move forward with something new and something better for society? The name [of the song] doesn’t ever portray the song’s meaning per se, it’s more of an outward view on the subject.”

To come up with these metaphors for life, The Old Screen Door collaborates with each other inside and outside of the studio. All four artists bring their own individual talents and ideas to create a song. Reich has only been drumming for two years and his first time performing on a stage was with this band. Although he is a fairly new musician, he has picked up the drums very quickly and couldn’t seem more comfortable on stage.

Buck brings a more formal approach from behind his keyboard with his knowledge of music theory, which he studied at American River College. Wildgust has been singing and performing ever since he was a kid.

“I’ve been a singer since I could hit notes,” he said. “I was hitting Mariah Carey notes before I hit puberty.” And originally a lead guitarist, Jonathan Maldonado doesn’t like to take the traditional route when playing the bass and adds his own personal spice, said Wildgust.

“It’s been a really cool learning experience for me as a musician to grow with these guys,” added Wildgust. “It’s really been a give and get kind of situation.”

The Old Screen Door couldn’t have passed their musical message without the help of their friends and family. Wildgust’s cousin creates all of the graphic art for the band’s posters and website, his aunt helps to write the content on its band website and press releases, and Harrison’s mom allowed the band to practice in the living room when they first got started.

The first fan club consisted of friends and family, who would attend every show and enjoy every minute of it.

“They are all stoked because they wanted to be there, they love the music on top of the fun they have at the shows,” said Wildgust. They have helped to spread the band’s name, even the acronym of The Old Screen Door has inspired phrases like “Get TOSD,” “I’m TOSD” or “Way TOSD” at their live shows.

“We try and market as well as we can and we try different things from the other bands that we know, to just try and make sure that we get to everyone possible,” Reich said. “We try everything we can to see if we can get people out and it’s working out pretty well. We get a lot of return visits. A lot of people find us to watch us again.”

With the support of their family, they only had to be together for a week and a half to get up on stage and perform as a band. “Ever since then I’ve been booking the shows. It’s been a super crazy dream with everything that we’ve been doing,” added Wildgust.

Their publicity and hard work is quickly starting to pay off. Each band member considers being part of the band as a part time job, they dedicate a lot of their time to getting noticed and perfecting their music.

“We can always do better,” said Wildgust. “I think that’s why we progressed so fast, it’s just that drive to become something good to listen to.”

The band has been working overtime to fit in band practices three times a week, have one live show a week and continue to talk about their band everyday.

“For how much we put in and how much we are getting back now, it’s priceless,” said Wildgust.