When Imbibe magazine listed Sacramento as one of the top 10 “places to visit in 2013” because of its surging craft-cocktail culture, it seemed as if by some divine alchemy the local drink scene finally made it onto the radar of cocktail enthusiasts on a national level.

At the crux of the movement promoting the local hand-crafted dram is The Red Rabbit Kitchen and Bar, where you’ll only find cocktails created from the ground up—homemade syrups, freshly squeezed juices and ingredients like fresh, hand-muddled herbs join the party in the glass.

“This year we’ve had a lot of national, and some international, focus on Sacramento as being a legitimate cocktail town,” says Matthew Nurge, one of the restaurant’s partners. “To be mentioned now in the same conversation as Portland, as Seattle, as New York and San Francisco is awesome.”

When longtime friends Nurge and Sonny Mayugba (chef John Bays is also a part owner) opened the doors to their hare-themed restaurant in February 2012, their vision was simple: to create a chill environment where cocktail nerds and neophytes alike could luxuriate in high-quality food and drink.

“The whole idea behind this restaurant is we wanted to do kind of a sexy upscale atmosphere, but we really wanted the attitude to be casual and easy and simple,” Nurge says. “So the whole idea between both the food program and the bar program is that we come up with simple, delicious, affordable food and beverage. We want to be a neighborhood craft bar, our motto is ‘Raising the Neighborhood Bar,’ so we wanted to have the same casual vibe of a neighborhood joint with some good stuff—good food and drink.”

A sentiment embraced by the cheerful and enthusiastic staff behind the bar.

“We work really hard to make sure that everyone who comes in here feels welcome. There’s a complete lack of pretension that’s in here,” says Christopher Sinclair, Red Rabbit bartender and president of the Sacramento Bartenders Guild. “It sort of oozes out of the walls. I mean from the way that we talk to each other to the way we talk to our customers.” 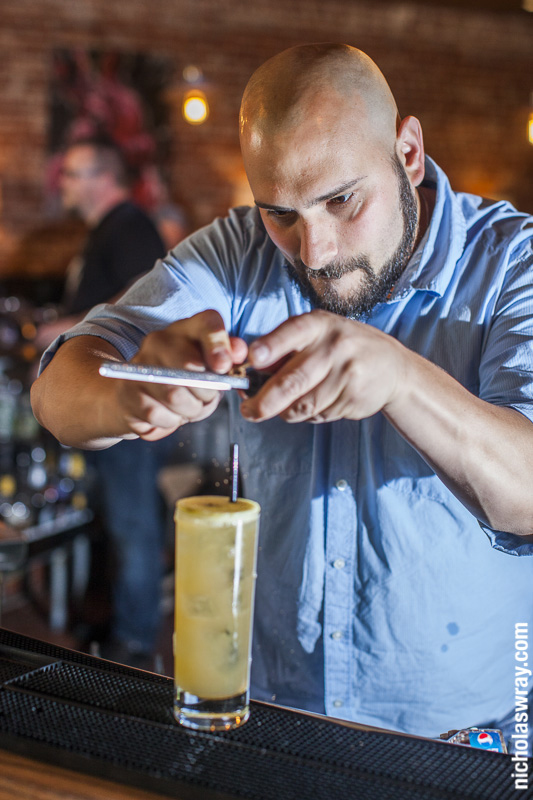 Much like the “farm-to-fork” movement that’s filled the bellies of local foodies, a burgeoning “farm-to-glass” campaign is starting to resonate with those looking to get their quaff on.

Nurge, a Sacramento native and self-professed “cocktail nerd” cut his teeth in the bar business as a youngster hanging out with his mother while she tended bar at Joe Marty’s on Broadway, but perfected his skills as a mixologist at R15 and The Shady Lady Saloon.

Boasting an eclectic roster of spirits, the cocktail menu is a throwback to the fine art of cocktail-making that was the hallmark of the pre-prohibition era.

“Some of them are from old recipes dating back to the 1800s and some of them are kind of modern twists on some of those,” Nurge says. “It’s kind of an amalgamation of that, some are mine, some are stolen, some were lost to history.”

Nurge credits partner Mayugba, yes, the same Mayugba that put out the seditious zine Heckler back in the day, as the “super-connector” for bringing together a brilliant cast of restaurant and bar industry talents—including longtime chef John Bays, who honed his culinary chops in the kitchens of heavy-hitting restaurants like Mulvaney’s B&L, Morton’s and Rio City Cafe.

“I’ve never known anyone in my life who can get things done as easily as he can, he just says things and makes them so,” Nurge gushes about Mayugba. “There’s almost something magical about it, he puts it out there and it just happens. So, Sonny put us together, basically.” 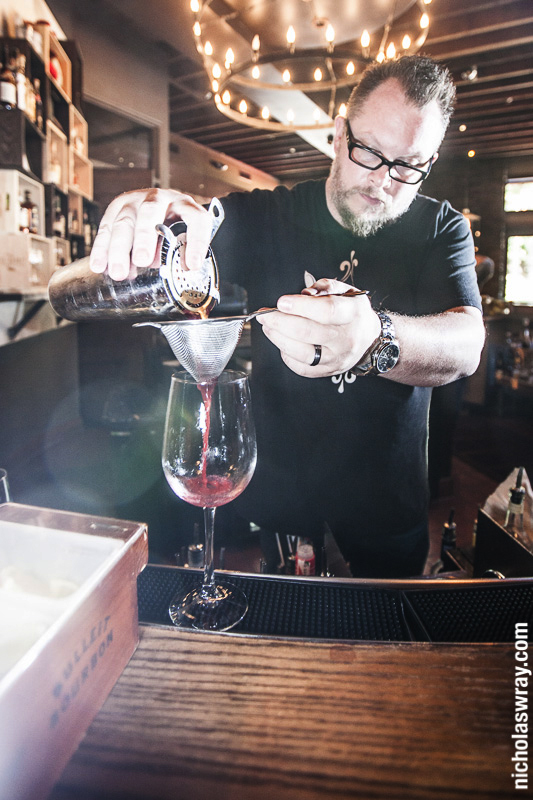 The cocktail menu is an exercise in restraint—you won’t find an encyclopedia-sized treatise of offerings—mixed with cheeky nods to social movements (Harvey Milk punch), historical references (Krakow salt mine) and literature, like the trio of tastings inspired by Chuck Palahniuk’s Fight Club.

“First rule of ‘flight club’ is you don’t talk about it,” Nurge jokes. “The ‘flight club’ is just a simple idea I had to help introduce people to things that maybe they haven’t tried before. It’s an affordable way to try new things or to try things that you already love. The price is ridiculously low. I mean it’s $15 for three tastes and some of the stuff you might get in there is $15 a pour on its own. It’s a fun way to get people to try new stuff; that was my intention, anyway.”

Nurge adds that bartender culture also served as inspiration for one of the libations on the Red Rabbit menu.

“With the ‘buck hunter,’ the style of cocktail is a buck (a class of cocktail that mixes ginger beer or ginger ale with citrus and spirits) and Buck Hunter is a video game that bartenders like to play,” Nurge says. “For whatever reason, I don’t know why [Buck Hunter], somehow became synonymous with bartenders.”

With Midtown Cocktail Week quickly approaching, another reason for the nod to the local liquid culture by the editors of Imbibe, Nurge and the rest of the Red Rabbit contingent are planning a bevy of activities surrounding the fete. From a competition that takes its inspiration from the three-legged races of family reunions and picnics, involving a suit in which two bartenders will literally be attached at the hip, to a pop-up event demonstrating the talents of its drink-slinging employees, the Red Rabbit is gearing up for the alcohol-infused festivities.

“On Sunday, Aug. 25, 2013, we have an event called ‘Best in Show,’” Nurge says. “We’re the last event, and the last event tends to be kind of what we’ve dubbed the closing party. It’s sponsored by Maker’s Mark, and we’re doing a blue ribbon county fair meets pig roast event, so we’ll have carnival games and prizes and a nice, big, fat pig roasting in a box.”

At the core of the Red Rabbit’s bar program is a dedication to quality ingredients, but it’s the partners’ belief in, and commitment to, the ideals surrounding the locavore movement that extends beyond the bar and spills out onto just about every facet of its business model that makes it so distinctive.

“We have a program, the employee incentive program; not that anyone’s made too many dollars from it, but every employee here is actually a part owner,” Nurge explains. “So the employees collectively own five percent [of the business].”

The partners are looking to expand the reach of the hare; Nurge alludes to a possible expansion effort into “The Kay” district and hints at even breaking with a few craft-cocktail traditions when Sinclair suggests the addition of milkshakes to the menu.

“That means we need a blender,” Nurge retorts. “I’ve been on a no blender rule for like eight years. When the whole cocktail resurgence started, everyone who thought they knew something, thought they knew everything, so all of a sudden there were all of these new rules. You know, like no one makes Long Islands, no one carries Jägermeister, no one has a blender, no one carries Red Bull or blue Curaçao.”

After surviving a year in one of the toughest businesses to break through in, as well as a nasty smear campaign by a disgruntled Yelper, the Red Rabbit endeavors to follow in the footsteps of its block mates, notably, Harlow’s and Centro.

“I think we just have a rad concept. We have good product, at what I believe is a good value, and we have good people that work for us,” Nurge says. “That’s a big key to the success of this business.” 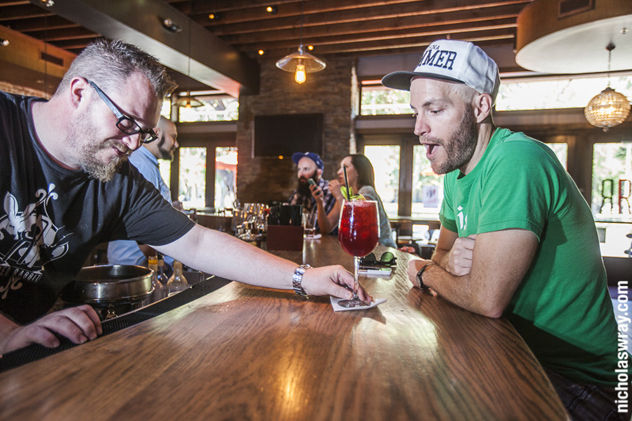 Nurturing the talent in its ranks, while looking to spread the gospel of the Sacramento craft-cocktail scene, Nurge is thrilled by, and, most importantly, supports his employees’ desire to travel the world in search of inspiration—from competitions in Chicago to Puerto Rico.

“I get to meet awesome bartenders and see what they’re doing outside of just our little bubble,” Sinclair says. “It also allows me to spread the good word that is Sacramento and get people really, really excited about coming here and getting excited about seeing this place and bring sort of the appreciation the city deserves, as well as this restaurant.”

The philosophy of craft doctrine also appears to be spilling out into the corporate market—with franchises like Disney and Applebee’s serving up their own craft-inspired cocktails on their respective menus. The movement looks like it’s gaining some serious mainstream credence.

“That’s why T.G.I. Friday’s has craft cocktails on their menu now,” Nurge explains. “It’s everywhere, it’s spreading, but in a good way. It’s a pain in the ass—just ask Carlos over there—to juice for five hours a day, but the end result in the product is irreplaceable.”

Best in Show, The Red Rabbit’s official Midtown Cocktail Week event, will take place from 1 to 4 p.m. on Aug. 25. Admission is free. For a full list of MCW events, go to Midtowncocktailweek.org. 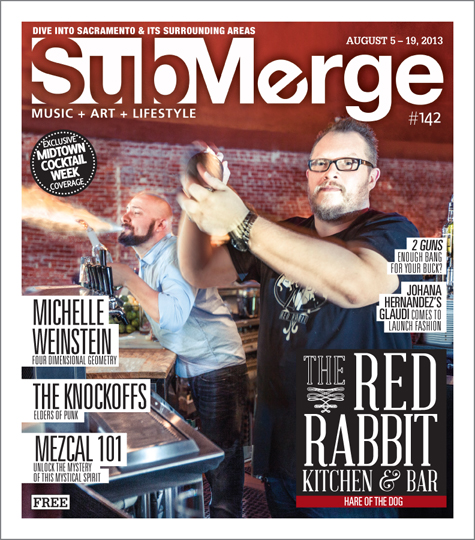