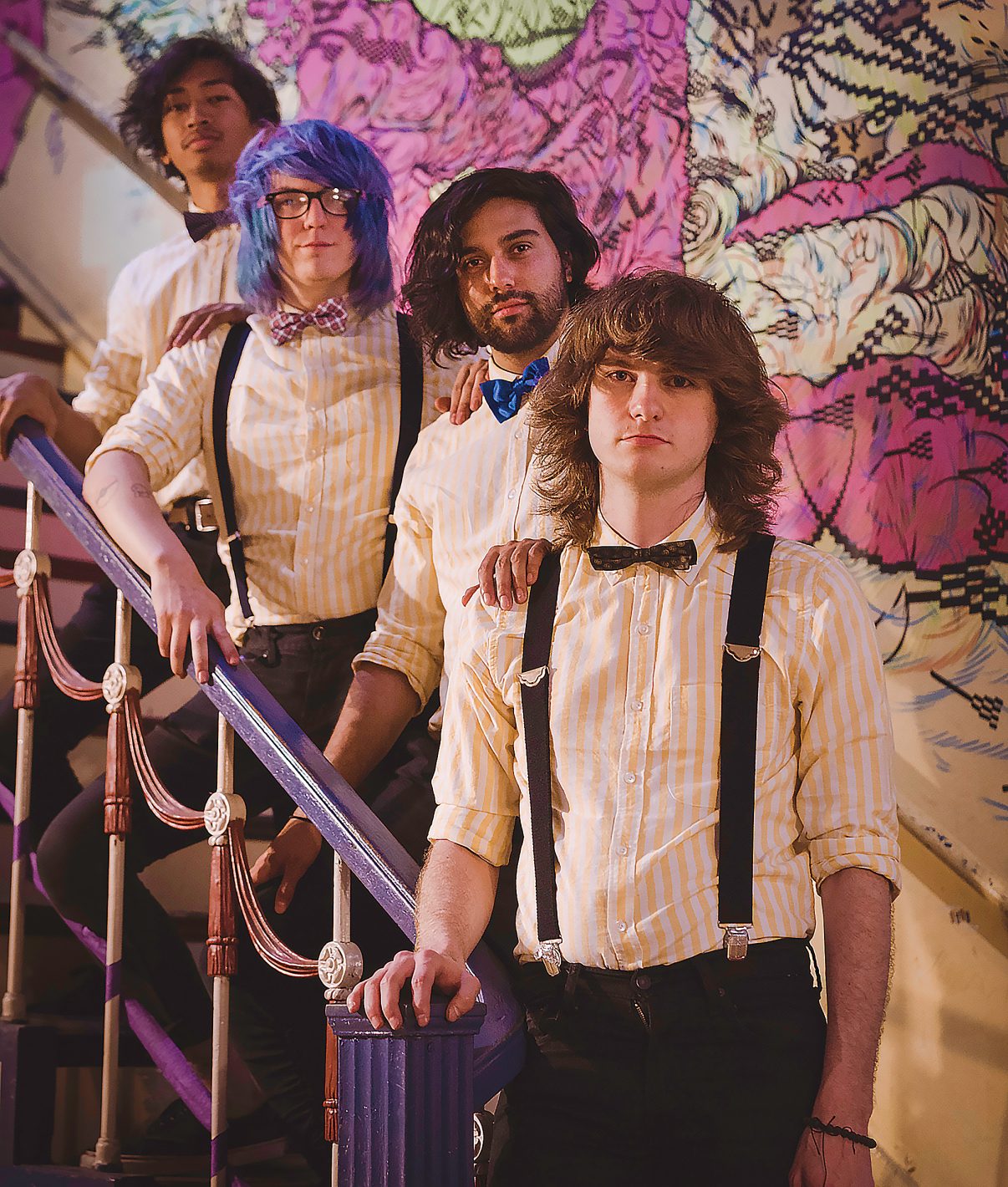 Anthony OnFire walks into the building looking like a time traveler from the year 2008. His long, highlighter-colored hair is chopped up into anime character proportions, with bangs held back by a sweatband. His left wrist is practically weighted down by a nest of rubber bracelets, a la the Livestrong craze. When he sits down, he actually has to jump up for a second and pull something out of his back pocket—he’s accidentally sat down on a Game Boy Advance Pokémon game cartridge.

“I’m stuck,” OnFire admits. “Everybody gets stuck at some point in their lives.”

OnFire and Neil Valencia are at a café to discuss their band, The Seafloor Cinema. The other members, Justin Murry and Douglas Andreasen, can’t make it tonight. Like OnFire’s look, the band takes some of their inspiration from the bands of emo and post-hardcore’s heyday in the mid-to-late aughts—bands like Fall of Troy, Good Charlotte or Kurt Travis-era Dance Gavin Dance.

But the band isn’t just stuck in the past. Their latest album, A Metaphor for Honesty, blends these nostalgic influences with forward-thinking math-rock riffs and a strong sensibility for catchy melodies. Or, put more simply:

“We like to cry. That’s our biggest inspiration,” says OnFire.

Just to clear things up, when asked about his name, OnFire says, “It’s an ancient Toltec surname. I got it from my ancestors the Mayans after they rejected the Spanish.”

“Anthony is kind of an insane person a lot of the time,” guitarist Andreasen says later on the phone, laughing. “I’m the one to bring him back down to ground level.”

The Seafloor Cinema actually began as a solo project for Andreasen. Inspired by bands like Covet, Andreasen wrote and released two instrumental math-rock songs as an EP called Wherever You Are. After the songs started gaining traction online, Andreasen decided to fill out the band with Murry on bass and Valencia on drums.

“We were all instrumental. Never thought about singing at all,” says Valencia. “Until Justin hits us with, ‘Yeah I can try singing.’ He sings in front of us and we’re like, ‘Why didn’t you sing at first?’”

Murry sings on the majority of the record, belting out melodies or softly crooning in the verses. OnFire—who didn’t join until last summer, right before the band went to Minnesota to record A Metaphor for Honesty with Tiny Moving Parts producer Gregory Lindholm—takes center stage for two emotive spoken word interludes.

Though A Metaphor for Honesty was just released last August, The Seafloor Cinema is already planning to hit the studio several times this year, both for a run of singles and an entirely new album. 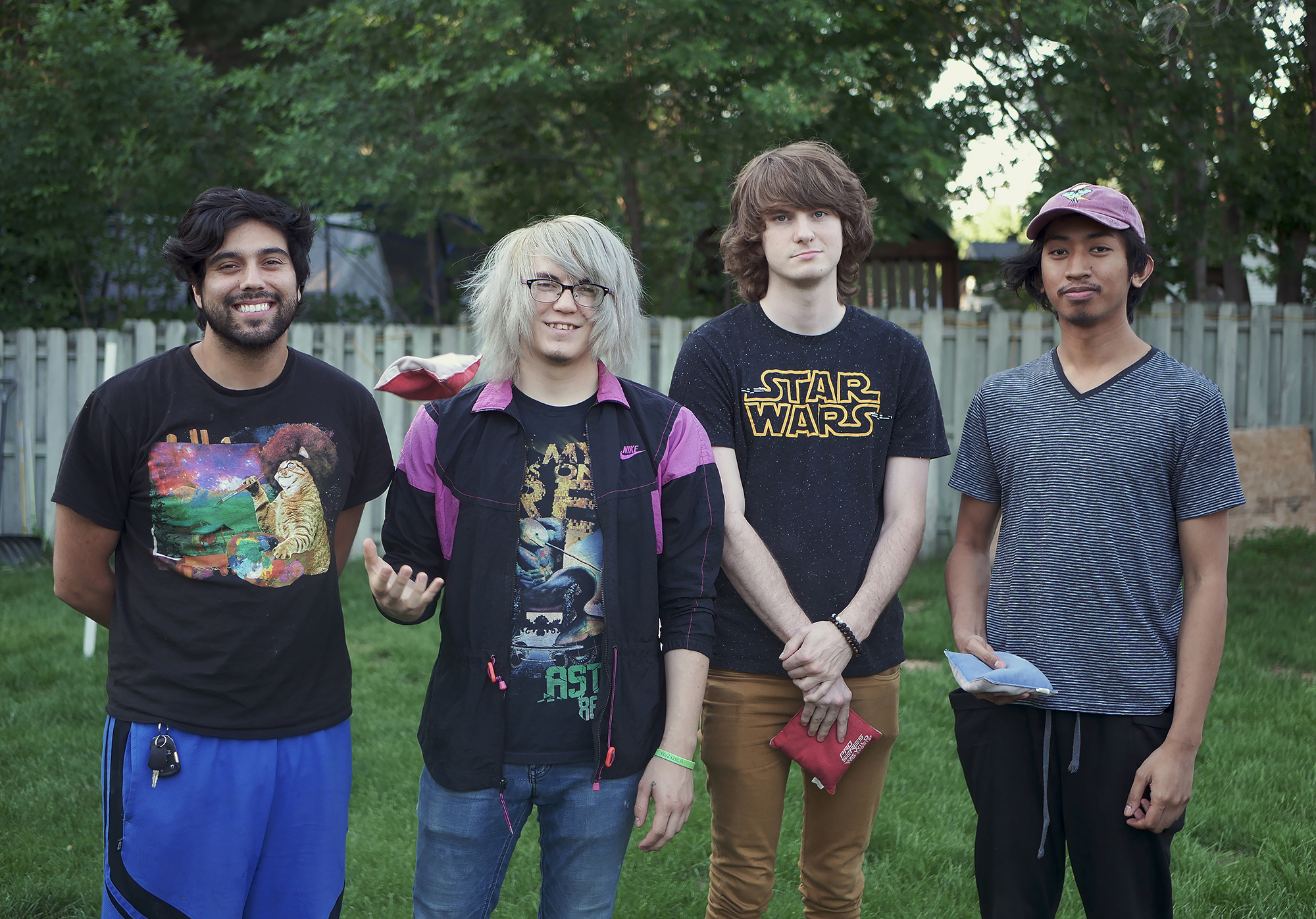 “Basically, Doug is a psycho maniac superfiend, and because he’s straight-edge, he has all these magic powers where he can write three songs and mix and master them in one day,” explains OnFire.

But it takes more than prolific creativity to keep the band in the studio so often. They also need money. For that, The Seafloor Cinema have discovered an unlikely business model.

“Twisted Sister used to frequent around and play different clubs as a cover band, and they made a lot of money, and that’s how they paid for their album and got famous. Basically, we took a cue from them, but we do Emo Night,” says OnFire.

When they’re not playing their own songs, The Seafloor Cinema is packing rooms covering the likes of Panic! (when they still had the exclamation mark) At the Disco and Fall Out Boy for crowds of nostalgic millennials.

Andreasen says the band was introduced to an Emo Night promoter named Marcus Leonardo through Sacramento-area bookers Bit Crusher. The band tried it out for a night and it was an instant success. Andreasen says Leonardo asked them to keep coming back for more Emo Nights, and even put them on the Emo Night tour.

This year, The Seafloor Cinema is going as far as New York to play Emo Night shows. They get to play some of their own songs throughout the sets, plus they say they sell a lot of merch and tickets and squirrel away the proceeds for recording the next album. The best part is they schedule their own tours around the Emo Night dates.

While other bands might shy away from doing covers, Valencia, OnFire and Andreasen agree that not only have the Emo Night shows been a huge boon to the band’s success, they’re also just a lot of fun to play.

“Venues treat you like a rockstar,” Andreasen says about playing Emo Night shows.

The Seafloor Cinema has also expanded its reach online thanks to a collaboration with Boketo Media, an effort by YouTuber Jarrod Alonge to give an online platform to up-and-coming artists. At publication, their video for “In the Future There Will Be 500 Channels but Nothing to Watch” has over 17,000 views on the Boketo YouTube Channel.

If you’re a fan of The Seafloor Cinema, you may not realize that you are part of a club with a creative name. OnFire, who runs the band’s Twitter account, put out a poll in October 2019 asking, “What should we call our fans?”

An overwhelming 74 percent of fans voted to call themselves “Pissbabies.”

If nothing else, The Seafloor Cinema is having fun, and their Pissbaby fans are having fun with them. They’re still young, and with the winds of Emo Night and Boketo at their back, the band is sailing ever onward. No matter where they end up, they say it’s all worth it to write songs with friends and hope they connect to someone, somewhere, someday.

“In the end, it probably doesn’t matter, just put it out,” says OnFire.

The next Pissbaby gathering will be Thursday, Feb. 6 at the Boardwalk (9426 Greenback Lane, Orangevale), where The Seafloor Cinema is opening for Japanese math-rockers Paranoid Void, along with Enter:Villain and Predisposed. Show is all ages and begins at 6:30 p.m. You can also catch The Seafloor Cinema at The Starlet Room (2708 J St., Sacramento) on Thursday, Feb. 13 at 7 p.m. For more information on these shows, visit Facebook.com/theseafloorcinema.