WATCH AND LAUGH AS LOCAL MUSIC SCENE MEMBERS COMPETE IN THE SECOND ANNUAL NON DRUMMER DRUM OFF ON NOV. 10, 2013 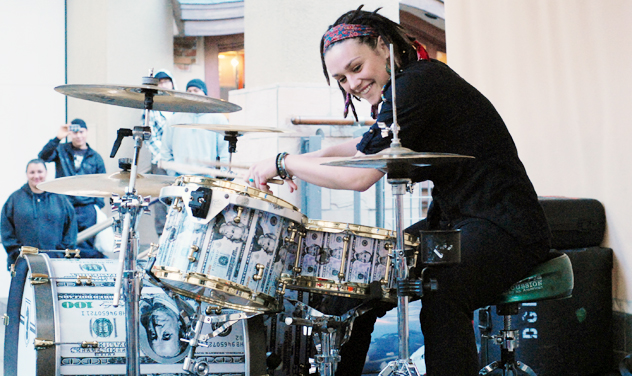 Here’s an event where people willingly go in knowing that what they’re about to hear is going to be bad. Real bad. It’s the second annual Non Drummer Drum Off, presented by ZuhG Life! This year’s Non Drummer Drum Off, a drum off consisting of local music scene members whose primary instrument is not drums (some don’t play any instruments at all, which is even better!) is going down at Harlow’s, located at 2708 J Street, on Sunday, Nov. 10. Last year’s event was held outside the ZuhG Life Store (RIP), in the Downtown Plaza, and it was really fun but mostly just funny. Yours truly even participated. And although my one-minute drum solo was pretty awful, I did not take home the win—which is to say, I was not the worst. That’s the point here, people, to be the worst! The winner (er, loser?) takes home a prize. Just some of this year’s confirmed participants are Hans Eberbach, singer of Joy and Madness; singer/songwriter Autumn Sky; Joe Johnston, owner/engineer at the infamous Pus Cavern Recording Studio; Tyler Campbell, frontman of reggae/rock group Arden Park Roots; Heck, the ZuhG guys even talked peeps like Nick Miller (SN&R co-editor) and Clay Nutting (co-owner of LowBrau) into signing up. There are plenty of other contestants, too, and they will all be judged on their one-minute, unaccompanied solos by actual drummers Christopher Bryan Amaral (Nickel Slots), Zack Kampf (Relic 45) and well-known local percussionist Brian Rogers. Some of the contestants will perform afterward (Lindsey Pavao and Hans), so your $8 cover will also get you some good tunes after the bad drumming wraps up. Doors open at 6 p.m., and the kitchen will be open, so bring your appetite. You might want to grab those earplugs on the way out, too!