We’re Better Together • The T Sisters on Family Band Life 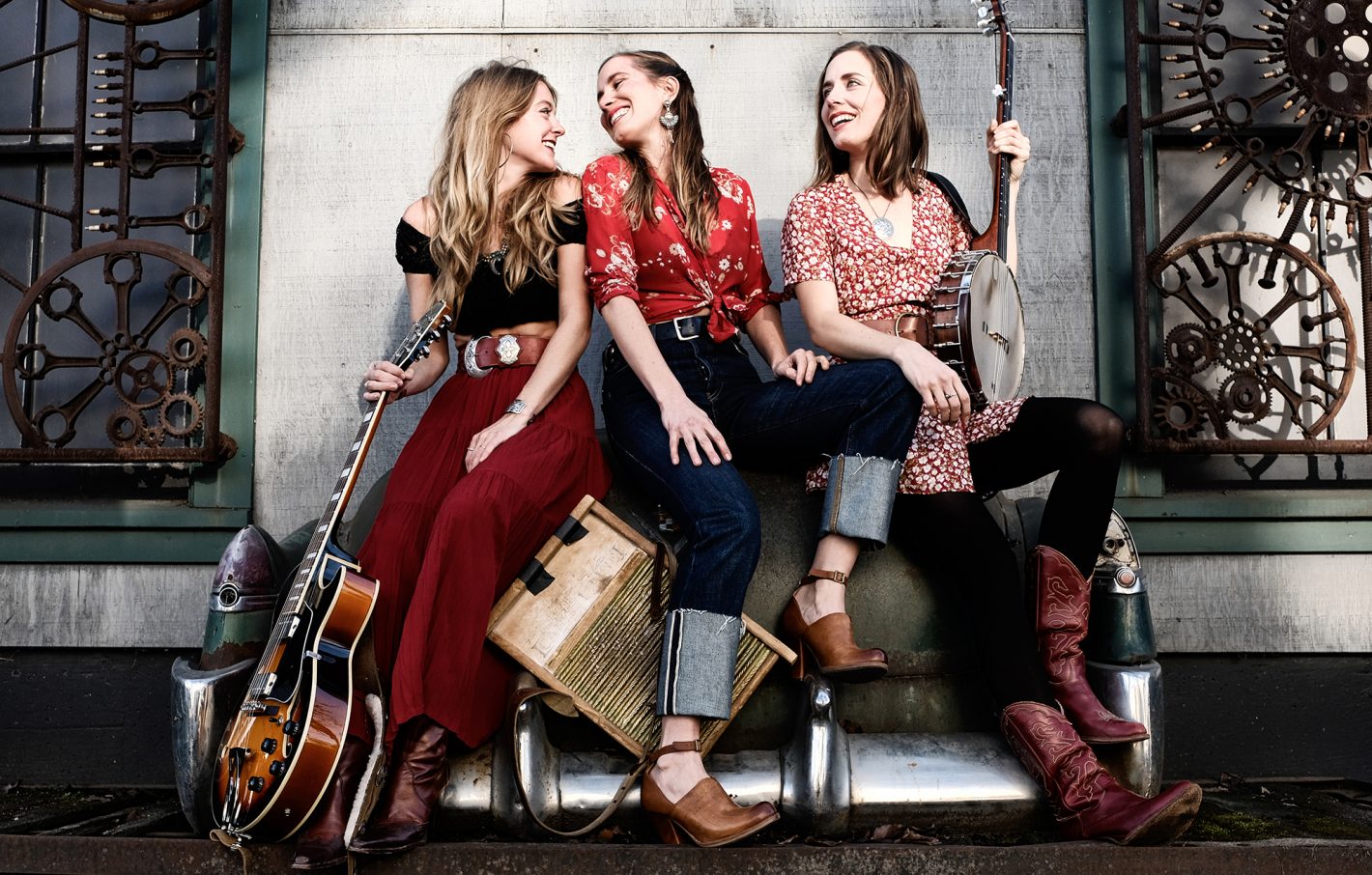 Keeping a band together can be tough, but when you find the right group, you feel nearly unstoppable. Sometimes you come together through your community, and sometimes you’re born into it, like Erika, Rachel and Chloe Tietjen, better known as the T Sisters.

When most people think of a family band, the first thing that comes to mind is air-tight harmonies, which the T Sisters don’t fall short on. Maybe there are inherent genetic similarities (Rachel and Chloe are also twins), but a lot of the connection also comes more from nurture than nature.

“One thing that’s an advantage is we were raised by the same people, we grew up hearing language similarly,” said Erika. “Our voices are definitely not the same, but we have more similarities in speaking and pronunciations than people who are not related, probably. Even though we write different types of songs, we can connect over a lot of the same music. We come together stylistically.”

The Tietjen sisters grew up in the Bay Area, where music seemed to be around from the very get-go.

“We definitely started singing together because music was such a big part of our upbringing,” Chloe said. “Our dad is a singer-songwriter and our mom grew up singing with her sisters, so there was a lot of playing and singing and listening to music in the household. As 8 to 10-year-olds is when we started getting on stage. We did a lot of musical theater around that age.”

The sisters remained in the musical theater world for a long time, eventually co-founding Chthonic Theater in Oakland. Throughout that time, they began writing and performing original songs, though most were angled more toward musical theater. The official idea of the T Sisters formed almost accidentally.

“We were playing at an open mic at the Starry Plough in Berkeley,” Chloe said. “What they’ll do is select one artist to be the featured artist at the next open mic, so the woman who was hosting the open mics at the time was like, ‘You guys are great, we’d love to have you be the featured artist, what’s your band name?’ On the spot I was just like, ‘T Sisters,’ because our last name starts with T and we’re sisters. It was a very spontaneous decision; it was sort of from that point on that we started developing our sound together. We started writing more songs that were outside of the context of a musical theater piece. At a certain point, we started getting offered gigs, and then years down the line we were getting so many gig offers that we thought, we really need to get out of the way of this progress and see what happens.”

The sisters have been on the road fairly consistently since, touring with artists like Amos Lee, Elephant Revival and ALO, simultaneously honing their sound and expanding into a full band with bass, guitar and drums. That early theatrical background feels apparent on some of their first recordings, like the slightly vaudevillian “It Was Me,” which features a French-inspired instrumentation creeping beneath three familial voices moving in swift figure-eights between harmonies and counter melodies, softly landing in staccato on prominent plucked bass, like jumping lily pads.

As time has passed, their style has taken a more distinct shift toward folk territory. Their most recent live EP, recorded at Tiny Telephone Studios in San Francisco, has an Americana thrust to it, especially on songs like “Come to Me” with its chugging snare and clean, vibrant vocal hooks.

Though the theatrical approach no longer feels as audible, it’s become more of a visual performative intention.

“We have songs with the band with choreography that we do, and that’s pretty atypical for a folk band. We play disco songs and that’s really fun,” Erika said. “It’s more fun to have dynamic stage personas and costumes and dance moves and scenery, insofar as we can create that with the means that we have. That’s something we want to continue to develop. We don’t think about our stage performance just as ‘what’s the song about? Let’s play the song now.’ We wanna make things more entertaining, and have some more of those theatrical elements.”

Another outlet for that creative energy has been creating videos for covers, like a recent one for The Ting Tings’ “That’s Not My Name.” A listener might expect a stripped-down folk ballad version, but instead, the T Sisters (along with Megan Slankard) keep its shape as a pop song, bouncing through the choruses with charisma, dressed in leopard fur coats and sparkling red bow-ties.

“It exercises some of our other creative skills. Rachel did the video editing and we did all the recording,” Chloe said. “It’s a fun way to exercise some of those creative muscles that exist just outside of the music, and cover tunes [are] a fun way to bring that in.”

Though their involvement has lessened, the sisters still work with Chthonic, where they’ve been producing an ongoing variety show for nearly a decade.

“That remains something that keeps us connected to our community of artists, because we do a lot of touring, so it’s nice to have a way to create this space for other artists to connect,” Erika said. 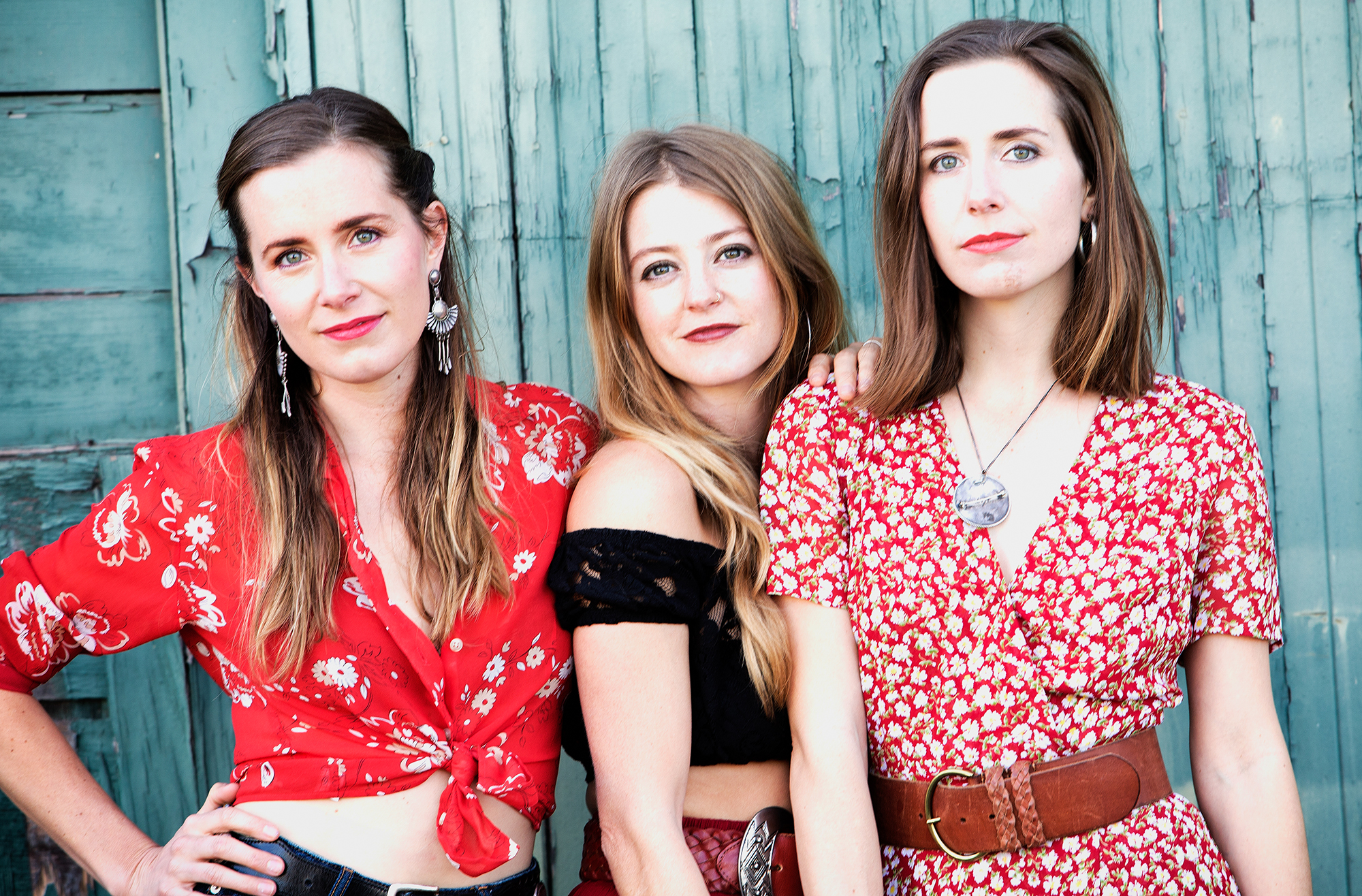 These days the sisters spend a majority of their time on the road. It’s a busy lifestyle, and when they’re not collaborating as the T Sisters or within the Chthonic, they’re all in the same home living together.

“It’s all very shared; sometimes it’s hard to draw those boundaries and say, ‘OK now we’re not working, we’re just having family time,’” Chloe said “I think anyone who’s been in a family business, or with their parents or partners [knows] that’s a really hard thing to do, and it does take a conscious effort to turn down the work dial and try to reconnect on those other basic levels.”

One experience that isn’t shared is the songwriting process. Each sister contributes to the song catalogue, and even with those shared familial experiences, they all approach writing uniquely. The trick is to maintain that distinction while keeping a cohesive sound.

“We all have very different songwriting voices, and in order to maintain the diversity of music in our set, we really like to keep the songwriting process separate. Then everybody can really manifest their musical vision,” Chloe said. “We come together for the arrangement process. Some songs are harder than others; sometimes those are the most fun, because that’s where we really get to stretch ourselves creatively to come up with an arrangement that works, that maybe isn’t intuitive right away. We’ve gotten more and more adept at the process of putting our heads together.”

The trio is currently sitting on a batch of new songs they’ll be bringing to Nashville to record in May. Even if they’re stemming from different inspiration, their hearts are all in the same place.

“We have a shared vision, and we’re all equally invested in the project, which I think is sometimes the hard thing about bands: keeping the band on the path together and everybody having the same amount of energy going into the project,” Chloe said “We realize that … What’s that phrase?”

“The whole is greater than the sum of the parts,” Erika interjected.

“We’re really in it together,” Chloe said.

See the T Sisters live at The Center for the Arts (314 Main St., Grass Valley) on March 16, 2018. You can purchase tickets in advance through Thecenterforthearts.org. Honey of the Heart will also perform.