Jake Smith’s story of becoming an artist is not uncommon. The singer/songwriter otherwise known as The White Buffalo began writing in the early 2000s and played just a handful of shows in San Francisco, struggling to find a niche in the Bay Area music scene with his patented rock that ranges from soothing to savage. As music became less of a hobby and more of a realistic endeavor, he relocated to Los Angeles (close to where he was raised) and doors began to open more frequently, granting Smith and bandmates Matt Lynott (drums) and Tommy Andrews (bass) more opportunities to show off their craft that embodies the pure elements of country, soul and punk.

Some of the perks of the move included more exposure to some of the right people, resulting in TWB’s contribution of original compositions and a couple of outstanding cover songs to the critically acclaimed television series Sons of Anarchy. The raw talent Smith possesses, and the moody and real trademark stamp he puts on these songs, intensifies the scenes in which these songs appear.

The White Buffalo’s third full-length album and newest release, Shadows, Greys and Evil Ways, tells the tale of two mythical characters, Joe and Jolene, which Smith admits he created as an unintentional concept. The music and themes found on this record are gripping and engaging—sometimes uplifting, sometimes somber—which accurately parallels his musical stylings.

“I write about all walks of life,” Smith recently said in his “Ask Me Anything (AMA)” on Reddit. “Songs for the underdogs and the outlaws. Love songs, heartbreak songs, murder ballads, drunken laments and everything in between the shadows.”

Submerge caught up with Smith just ahead of The White Buffalo’s show at Sacramento’s new Goldfield Trading Post. Read on to learn more about his influences, his envy-inducing collaboration with Colorado craft brewer Oskar Blues and which beloved Queen song The White Buffalo recently covered.

How did you cut your teeth in the music scene?
It’s been a long haul for me. I started writing and playing in San Francisco in the early 2000s and played only about a handful of shows in about as many years. It wasn’t until I got a call about using one of my songs in a surf movie and that inspired me to move to Los Angeles because shit wasn’t really happening for me in San Francisco. During that time, the DJs were kind of taking over and the small clubs weren’t really doing much live music.
When I moved to Southern California, I started playing live only about once a week but started diving in. It took me a while to gain momentum; all the while I was staying on people’s couches and guest bedrooms for a couple years until my wife got a hold of me and helped straighten me out and get me focused on playing and writing more.

How was touring with Chuck Ragan this spring? Do you have any tour stories that are stranger than fiction?
Musically, it was a cool fit. We have similar approaches to performance and songwriting. We both give it all we’ve got emotionally and physically on stage. Chuck and his crew were all super great to us. Before the tour, I only really knew him by name and from playing with Hot Water Music, so it was nice to get acquainted with his music. It was a great time.?
Weird shit happens all the time, but we’re fairly sedate and DIY, so we have to remain on point and we don’t let our guards down quite as much as we used to.

Where did the name The White Buffalo come from?
My friends thought I needed some kind of aka or moniker because it wasn’t terribly mystical to be called Jake Smith. We threw some names in a hat and I picked that one and thought it carried some weight and intrigue. I figured we could sell some T-shirts with a memorable name. I am involved with social media, but try to keep some privacy and mystery.

The name conjures up some epic imagery of earlier times in history. Do you ever feel like you were born in the wrong era?
The music we play is definitely more throwback with different modern twists, but is also very organic. I don’t necessarily wish I was born in the ’60s or ’70s but do idolize a lot musicians from that era like Townes Van Zandt, Bob Dylan, John Prine and Leonard Cohen.

You seem to be in the right place at the right time with some of your songs being featured on Sons of Anarchy. Has being involved with the show helped your status?
The show has helped me out incrementally by widening my audience, growing my fan base at a quicker rate and has given us exposure we may not have ever received if not for that extra attention. I’ve had seven or eight of my own songs on the show and have sang in collaboration with The Forest Rangers covering “The House of the Rising Sun” made famous by The Animals, and more recently “Bohemian Rhapsody” by Queen. The people involved with that show are pretty diehard and the way they use the music is very unique. They creatively use montages and allow the words of the songs to help guide the story and move the plot along, effectively bringing out the emotional aspects of the show almost as if the music is its own character.

You effectively use dynamics in your music. Do you prefer to write songs that are gritty or gentle?
I write with a handful of different styles, but like both dynamics. I don’t necessarily think the subject matter will dictate what the song is going to be about. I like the juxtaposition of having a dark theme with feel-good melodies or vice versa. I try not to have one-dimensional modern country themes; it is interesting for me to write about things that are scary like murder and death as well as love, family or nostalgia.

Can you elaborate on the themes found within your latest album Shadows, Greys and Evil Ways?
I dove into writing a concept narrative about fictitious characters, Joey White and his wife Jolene. It’s about the trials and tribulations of his whole existence dealing with good and evil and people going off to war for the right or wrong reasons. I’ve always been intrigued by war and wanted to write about the effects it has on people in the past and present and touch upon how our country treats veterans after their time spent in the service. I had the bones for a lot of those songs before I even decided to do a concept album, then I filled in the blanks and made up a love story about the power of a strong woman in Joey’s life to make him feel human again.

Oskar Blues Brewery recently made The White Buffalo West Coast IPA. How did that come about?
We played their 10-year anniversary, Canniversary, and loosely discussed doing a limited run of a brew with the head brewer and told him what I had in mind and we made it happen. They’re canning a very limited run and it’s on tap in Colorado, but very hard to find. I love drinking IPAs, so I’m thinking about doing some more beer collaborations! 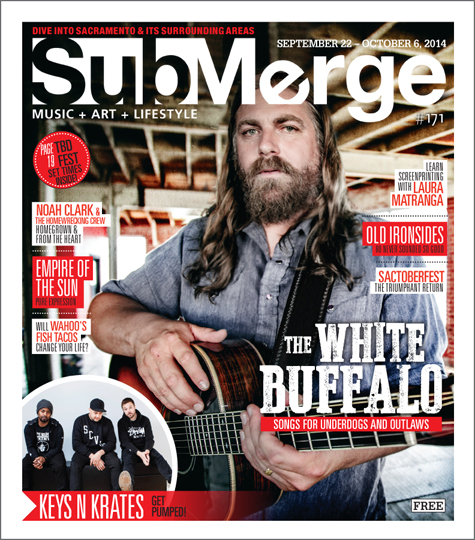