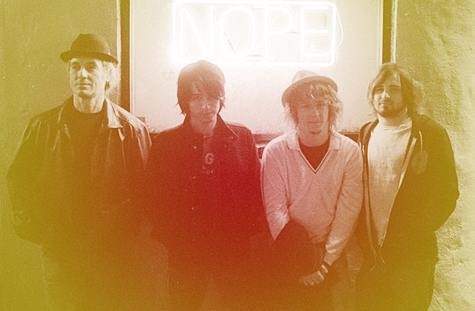 You could say Alex Nelson lives a scattered lifestyle. Somewhere in between picking up freshly pressed CDs, getting car steering fluid and heading to a wedding rehearsal dinner, the frontman of local band Walking Spanish found time to sit down over coffee and discuss the upcoming release of his band’s second album, Wishbones. It seems Nelson is ready to adapt to whatever situation is thrown his way. At his heel lay a backpack holding his computer, a change of clothes, cigarette coupons and a flask of bourbon, amongst other things. The first half of the following day would be spent as a groomsman in the wedding of a close friend, while the latter would be spent playing a show at Old Ironsides alongside Nicki Bluhm and the Gramblers.

Walking Spanish has become the centerpiece of Nelson’s life since he first formed the band with two friends in high school. Eventually he made it his own, writing all of the songs and assuming the role as band manager. The band’s evolution is apparent in Wishbones, he said. It is a versatile blend of well-structured songs, combining country, rock ‘n’ roll and pop, littered with subtly haunting, poetic verse.

After listening to the album, I met with him again outside Luigi’s Slice as he polished off a piece of pizza over the hood of his Honda just an hour before band practice.

Here is what the soon to be 23-year-old had to say about the new album, songwriting inspiration and maturing.

In terms of this record that’s coming out, how would you say it compares to the first record, or what should the fans expect? How do you think they’ll react?
I think they’re gonna go, “Whoa,” because it’s much different. I mean it’s still rock ‘n’ roll music but there is a lot more to this record. You’re listening to my songwriting and our band’s level of musicianship and our level of creativity. All those things, all those elements between this record and the first record, it’s, at least in my opinion, signs of maturing. To me, that means, just basically, that it’s better. [Laughs] To me, that just means that I’ll listen to a song and just be like, “Aw man. That’s a way better song than what I would’ve written when I was 18.”

Can you tell me a little bit about the song “Counterfeit Wishbones?” What inspired it?
I can tell you the emotion that arises from me is the feeling of being caged, and the idea of the “Counterfeit Wishbones,” you had chances to get out of the cage, but they were just counterfeit. When I was teaching this song to the band, I said I want this to sound like a tiger trying to get out of a cage. So I guess that’s kind of the theme of that one. As far as the lyrics go, the lyrics were inspired by, well, I’m not really sure. You’d have to dig really deep into my psyche to find out where those came from.

So why did you title the album after it?
I thought it would be kinda cool. I thought Wishbones sounded cool. Every song I write is like a piece of my mind, and if I’m putting out my words and my ideas out into the world, it’s almost like a wish. So Wishbones is kind of a neat voodoo thing that kind of has that whole theme attached to it. But it’s also like wishbones, there’s a winner and a loser. Which is kind of the way I look at the world, everything that’s good has its counterpart somewhere in the world, whether it’s directly related or not. There’s balance to everything.

So was there an inspiration for the song “Jacksin?”
Yeah. It’s kind of the same way that it’s fun to play video games where you shoot people, because you don’t really get to do it in real life. It’s kind of the same way I like to write a song. I wanted to get into the place to tell a story about an experience that I’ve never experienced and an experience that I don’t ever hope to experience, but by singing about it and trying to write from the standpoint of somebody who’s like that, and went through that kind of a situation, it’s almost like I was able to live it in that way. I mean, it’s obviously fictional, it’s just a story. A story that I think is a realistic story, because those things happen.

Where’d you get all the music influences?
Listening to it growing up. Growing up.

But I mean, parents? Or…
Oh yeah, well I had a good kick start, coming from a family that listens to a lot of music. So, my parents were divorced since I was 8. So I lived with my mom, and my mom had a good record collection. But even more so did my two older brothers that had record collections that were even more varying. My oldest brother had all kinds of old records from all different time periods. He had phonograph records, and CDs and tapes, and all kinds of collections of music stuff. And then my brother Brian, he had White Zombie records, Rage Against the Machine. And I got really into those bands, too.

So, speaking of brothers, your oldest brother is Jackie, Jackie Greene. So it looks like when you did this album, you were in his recording studio, right?
Right. Well, it’s Tim Bluhm of the Mother Hips. It’s his space. Jackie used it, though.

How is it working with your brother?
Working with my brother? You know, the funny thing is, that’s probably the most relevant question that anybody could ask when they’re asking about Walking Spanish and they’re pertaining to Jackie Greene. Nobody ever asks me how it is working with my brother. Everybody always asks, “Have you ever played with your brother?” Or whatever, things like that. It’s funny you asked that question.

It’s great, it’s wonderful. I imagine working with somebody who doesn’t understand me and what I’m trying to do as well as my brother wouldn’t be as easy. Because I can come up with an idea, and I only have to explain about a quarter of it and he’ll be like, “Oh yeah, I get where you’re going with that.”

Do you have any free time?
[Laughs] Yeah, sometimes. No, I do, that’s not fair. I have friends who work two jobs and go to school, and I have a lot of free time compared to them, because everything I’m doing is what I want to do. So it’s almost all free time.

And that’s the band?
Yeah. Everything I do is for that pretty much and that’s my job. So that’s what I do all day, that’s what I do all night. And during my free time I’m probably playing music anyways, or playing in another friend’s band. Or playing baseball with my brother for exercise in batting cages. Yeah. Playing with my dog. Reading books. Going to bachelor parties. 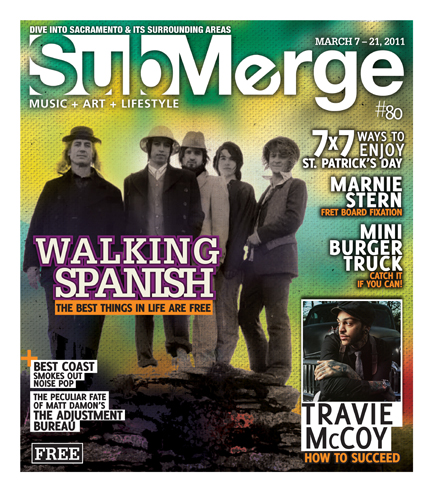 Walking Spanish will celebrate the release of its second album at Old Ironsides on March 25. Prieta will also perform. It will be $7 to get in, and the show starts at 9 p.m.