They Say the Geek Shall Inherit the Earth 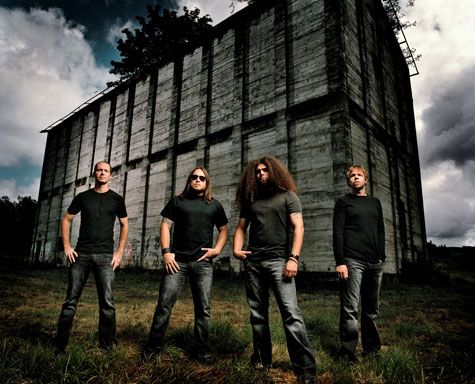 Coheed and Cambria Grow Stronger in the Face of Adversity

At this point in its career, Coheed and Cambria isn’t taking anyone by surprise. They’ve taken an unconventional path on their road to notoriety, to be sure, but despite they’re dazzlingly technical prog epics and baffling sci-fi concept, the group is firmly entrenched as part of pop culture’s subconscious, even if they’re just a hair off of the mainstream’s radar. Now, the group is currently embarked on its first arena tour as main support for rap-metal superstars Linkin Park. Their stint with Linkin Park will finish up in Sacramento at Arco Arena on March 10 and is part of a larger world tour that will see Coheed and Cambria roam the Pacific Rim with dates in Australia and Japan before heading through Europe.

“We do what we do, no matter the size of the audience,” says Coheed’s singer/guitarist Claudio Sanchez of his band’s approach to making the leap into playing arenas. “Definitely you can’t help—entering into Madison Square Garden, us being from New York—you can’t help but have some nerves.”

Though the stages are much larger, Coheed’s first arena tour actually reminds Sanchez of simpler times.

“It reminds me of when we first started out in a band and traveling around in vans, working to this level, no one knew who we were and you were relying on your live presentation to try to win over fans,” he says. “It feels that way again, but on a much larger scale.”

And though the crowds they’ve been playing to may not have been their own, Sanchez reports that he is happy with their response thus far.

“When we go out there and do our thing from the beginning of the set, you can see that it’s definitely new material for a lot of people out there,” he says. “It’s kind of hard for them to wrap their heads around, but by the end of the set, everybody’s super enthusiastic, and it really feels like we went out there and did what we needed to do, and we’re walking away with some new ones.”

It’s been a long road to get to this point—and they almost didn’t make it this far. Late 2006 was a tumultuous time for Coheed as both drummer Joshua Eppard and bassist Michael Todd left the band in November of that year for “personal reasons.”

“That whole time that we went through as a band—losing Josh and Mic—and trying to figure out, do we continue, do we not continue,” Sanchez says.

Dillinger Escape Plan drummer Chris Pennie eventually replaced Eppard (because of a contractual obligation, Foo Fighter Taylor Hawkins was called in to man the drums, playing off of Pennie’s demos, during the recording of Coheed’s latest album Good Apollo, I’m Burning Star IV, Part Two: No World for Tomorrow). Todd, however, was struggling with substance abuse. After some time in rehab, the bassist rejoined the group in April 2007. Sanchez says the decision to let Todd back in wasn’t an easy one.

“We were definitely hurt,” Sanchez explains. “There was a sense of betrayal, of course. But at the end of the day, he is our brother, and we just wanted to see him well. When he came to see us that day, before rejoining, he came with no expectations. He just came to apologize”¦ When we met and did our thing, we realized that we missed him, and that we wanted him back.”

Sanchez, Coheed’s primary songwriter, says that these tribulations definitely affected his writing of No World for Tomorrow. Set in a fictional universe and following two lovers (Coheed and Cambria), the band’s songs are tied together by a singular concept. However, this doesn’t mean that real life doesn’t work its way into the lyrics.
“I understand that at the end of the day, it is a piece of fiction, but a lot of it stems from reality—a lot of it is fed by things that have happened to the band and things that I’ve endured, personally,” Sanchez says.

“I knew how these stories were going to begin and end, but how to fill in those gaps, that was the hard part, and I’ve looked to personal experience to help feed that stuff,” he goes on to explain. “For this album [No World for Tomorrow], I certainly saw the parallels between what these characters had to endure and what we were enduring as a band.”

This difficult stretch seems to be behind Coheed. When Submerge spoke with Sanchez, he was on the band’s bus stopped in Kentucky (in what city he was unsure), and he was happy to report that he had just tracked some new material in a hotel room the night before. The next Coheed album will be a prequel of sorts, telling the origins of the story’s two main characters. This will effectively bring an end to the saga of Coheed and Cambria, and Sanchez says he’s unsure of what will come next; but fans shouldn’t get too worried about that just yet. It’s clear that Sanchez has plenty of more work left in him. During our conversation, he touched on a few of his other creative pursuits, such as his comic book work and also some of his other musical endeavors such as the Prize Fighter Inferno (“Inferno is definitely on the back burner,” he says. “I do want to put out another album for that project, just to conclude the story.”). He also mentioned a new project called Spencer Doll that will feature a female vocalist, though he wouldn’t elaborate further.

In addition to being the final stop on their tour with Linkin Park, Coheed’s show at Arco will also fall just a couple days before Sanchez’s 30th birthday—a milestone for most young adults that’s usually approached with a good mix of fear and anticipation. Sanchez seems to be taking it in stride, though.

“You know, I’ve got to tell you”¦these are the best years of my life so far,” he says. “I’m very fortunate to be in the position I’m in right now. I’m able to create; I’m creating a lot, whether it be musically or just anything. Every day I find myself doing something creative, whereas when I was 18 years old, I was kind of trapped.”

He continues with a laugh at the thought of his own mortality, “I’m getting to that point where I’m like, ‘Yeah, I could go,’ but I’m kind of excited. I like to be busy just creating stuff”¦ That’s just where I find my sanity and my happiness.”