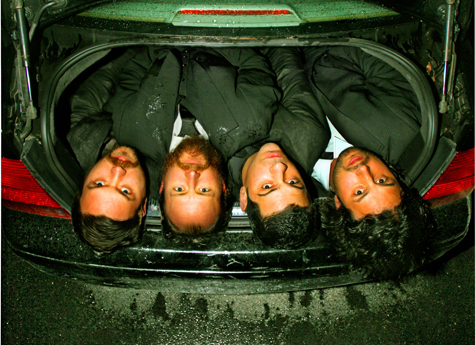 Dredg Digs Deep on New Album The Pariah, The Parrot, The Delusion

When used properly, words have immense power. Whether written, spoken or sung, they can and will affect people’s thoughts and actions. Perhaps no one is as familiar with this as British Indian novelist and essayist Salman Rushdie, whose controversial works (mainly his 1988 novel, The Satanic Verses) have sparked protests, uproars and even death threats against him. More recently one of Rushdie’s essays, titled “Imagine There’s No Heaven: A Letter to the 6 Billionth World Citizen,” had a profound effect on the members of Bay Area-based progressive rock band Dredg. After the writing process had already begun for what would become the band’s fourth studio album, The Pariah, the Parrot, the Delusion, guitarist Mark Engles came upon the letter and knew that he had to share it with the rest of the band, especially lyricist and vocalist Gavin Hayes. “Mark found it in a book he was reading called The Atheist Handbook,” remembers Hayes. “It’s like a chronological depiction of agnostic and atheistic beliefs. It was within that book, and he thought it was pretty relative to a lot of the lyrical content that I had already. So he forwarded it to me and I checked it out and was like, ‘Yeah, this is perfect.'”

Dredg is known for producing concept albums: 1998’s Lietmotif focused upon one man’s existential journey, 2002’s El Cielo is loosely based on sleep paralysis and was inspired by a Salvador Dali painting and 2005’s Catch Without Arms is about opposites and is divided into two “perspectives.” It was almost an immediate decision then for the group to loosely base their new record around Rushdie’s essay. “Imagine There’s No Heaven”¦” is best described as a beautifully written, daring letter that warns of different religious stories and beliefs and opines that one should instead learn for themselves through life’s experiences what to believe in. According to Hayes, “It’s about thinking for yourself.” He expands with, “It’s basically saying to go out, learn as much as you can, expand your mind and then develop your own belief system from there.”

Dredg, which has been a band since its members were in high school, is in the midst of a national tour in support of their new record that will bring them to the Empire Events Center in downtown Sacramento on Aug. 17, 2009. Submerge had a chance to catch up with Hayes via telephone from Jacksonville, Fla. to chat about the letter that inspired their new record, the band’s extensive recording process and what it feels like to be dropped from a major label.

Imagine you are a kid again, and someone read “Imagine There’s No Heaven”¦” to you. How much do you think it would it freak you out?
[Laughs] I don’t know if I’d actually understand it to be honest. I guess it would depend where I was at, if I was raised believing that there was this one God and that Jesus came back to life and saved everyone; then I might think, “Oh wow, that’s scary.” When that’s all you know, then everything else is scary, and it seems evil or something. But if I weren’t raised with it, it would probably be fine. I wish someone did read it to me when I was young.

The letter and the overall theme obviously influenced the artwork and packaging for The Pariah“¦. I read online that it was done by someone from the Bay Area band Division Day. How did that come about?
They’re actually based in Los Angeles now, but they’re all originally from the Bay Area. We went to high school with them. Their singer, Rohner Segnitz, he’s done a lot of work with us. He’s done a lot of our Web sites and he did El Cielo‘s artwork, so he knows our band really well. We obviously gave him the essay and a bunch of lyrics and an outline of how we wanted it packaged. We all knew we wanted it kind of to look like a letter. We went through a lot of different options before we even did the artwork. I had thoughts of putting it in an actual envelope and things like that. It just didn’t seem feasible; to stock that on a shelf, you know, stores get weird about that stuff. There are so many different variables that it definitely affects the decisions.

Producer Matt Radosevich said this of you guys, “Dredg is a band that looks at the recording process as limitless.” I found that interesting; could you elaborate on that?
That’s probably derived from all the experimentation we do in the studio. We try to create sounds that are unique to us. At least speaking for myself as a vocalist, I used tunnels outside and natural reverbs like that to get sounds for my voice rather than using a rack or a pedal or something like that. Things like that are more unique and special and actually make the recording process that much more fun. We worked at a few studios in San Francisco, one being Tiny Telephone that John Vanderslice owns, and he’s got a lot of cool toys in there. We’re really into getting unique sounds. The “Stamps of Origin” on the record, those little snippets, that’s like a Wurlitzer with all these crazy effects. We found that sound just by trial and error, I don’t want to say by accident, but just like tweaking a bunch of stuff. I had the idea of just having really intimate vocals over it, with no effects just really dry and personal. It kind of gelled the record together. We record a lot of ambient sounds in the studio, anything to make the process more exciting and to make everything more unique for the record.

The Pariah“¦ was released through your own label, Ohlone Recordings. Do you mind if I ask what happened with your relationship with Interscope?
Basically, we had been with their label for over eight years, and when we got signed to Interscope it was kind of the peak of CD sales, or I guess I should say the end of its peak. It’s a much different business, a much different label. Their business model has changed drastically; they’re much more focused on pop and R&B and stuff now. If you look at their roster, it’s either very established rock bands or more of a pop-, R&B-focused roster. There were bands around us that were getting dropped that were selling way more records than we were, so it wasn’t a surprise; that’s just the way the business is. That’s basically how it happened. It was nothing more than a logical move for what they were doing as a label. Eight years with a label is a good run. They helped us build, and we are where we are. We’re in a good position. On our own label partnering with ILG, Independent Label Group, out of New York. They’re Warner distribution, that’s something that we really couldn’t do on our own. I think it’s a great model actually; it’s just a one-record deal with them so we can see how it goes.

At least you’re in a good position now, stepping out on your own probably isn’t as terrifying as it might have been years ago.
Yeah, but still, when it initially happened it was somewhat of a letdown, and I felt like I was getting laid off on some level. I don’t know, we’ll see. There are pros and cons to it. Interscope was very beneficial for promotion and things like that. It’s a pretty big monster, so it can make things happen”¦ It feels good to be independent and to be running your own business and so on, but it’s also a little more stressful and it’s a little more work to make things happen and to get people to listen.

Have you been pleased with the reaction to the new record so far?
Yeah, so far at least the fans that we have are really digging it. I think 90 percent of them are really enjoying it, I mean of course there’s always people that are like, “Oh I like your first record, or your second record,” and so on. To be honest, I wish we were getting a little more exposure on this record. I feel like this is our best record. A friend of mine in New York called and was like, “Dude when is your record out?” and I’m like, “Yeah, it’s actually been out for like three weeks.” Obviously we’re not touching all the markets yet. This tour might be helping a little bit. I think we at least, with the amount of time we’ve invested in this band, deserve a shot at getting people to decide whether they like it or not. If they don’t, then that’s our fault and there’s nothing you can do about that. It can be frustrating if you feel like it’s not getting a shot and people aren’t having the opportunity to listen to it. That’s how our band has been our whole career; it’s been a very gradual, snail’s pace momentum.

At the end of your bio, it says of The Pariah“¦, “It’s the album Dredg has been working toward their entire career.” Would you agree with that?
Yeah I think it’s a great balance of our career, it has elements from our whole career mixed into one record as well as some progressive elements. At least personally speaking, these are some of my best vocal performances. I’m pretty happy overall with the record. I’m probably more content with this record than I’ve been with any record we’ve done. Whether or not people agree, I think that’s where all of us are in the band, we’re really happy with this record, it turned out exactly the way we envisioned it, which is rare.